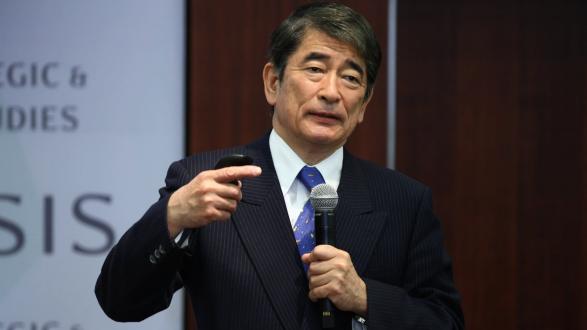 Yukio Okamoto, a distinguished Japanese diplomat, trusted senior advisor to successive prime ministers of his country, influential international consultant, and a long time Board member of the Pacific Council on International Policy, has passed away in Tokyo, a victim of the COVID-19 pandemic.

Mr. Okamoto’s important contributions to Japanese diplomacy have been emphasized in statements by prominent Japanese and U.S. internationalists, citing his consistent strategic emphasis on mutually respectful and durably cooperative relations between Japan and the United States.

I first met Yukio in Tokyo in 1994, when I spent several weeks in Japan as a Fulbright Senior Scholar, consulting with Japanese officials, scholars, journalists, and private sector leaders to discuss our project to build a nonpartisan, international policy forum in Los Angeles. Yukio was the quickest of my Asian interlocutors to grasp and articulate the potential usefulness of the Pacific Council, not only for Los Angeles, California, and the international relations of the United States, but also for the relations of Japan and other nations with the United States.

Yukio Okamoto was a foreign policy entrepreneur who resigned from his country’s diplomatic service to pursue more innovative and inclusionary approaches to foreign policymaking. He was thus a kindred spirit with the founders of the Pacific Council.

The Council’s core concept about helping define the national interests of the United States by engaging the participation of thought and action leaders from the West Coast fit perfectly with Okamoto’s concept of how both the United States and Japan should formulate sustainable international policies.

On our first encounter, Yukio offered to be helpful and introduced me to other relevant Japanese officials. He spoke at the Pacific Council’s inaugural retreat and participated regularly in these annual events. As a Board member, he offered sage advice, supported the Council financially, and provided occasional briefings for our members and suggestions for programs. When I consulted him about a senior staff appointment we were considering, Yukio provided a very thoughtful confidential evaluation that helped shape our decision.

Yukio Okamoto was a foreign policy entrepreneur who resigned from his country’s diplomatic service to pursue more innovative and inclusionary approaches to foreign policymaking. He was thus a kindred spirit with the founders of the Pacific Council, as he was with many U.S. specialists on Japan and East Asia more generally. He will be missed.

Abraham F. Lowenthal was the founding president and is president emeritus of the Pacific Council on International Policy. He is also the Robert F. Erburu Professor of Ethics, Global Relations and Development, Emeritus, at the University of Southern California.