Xi Jinping is China's Most Powerful Leader Since Mao Zedong 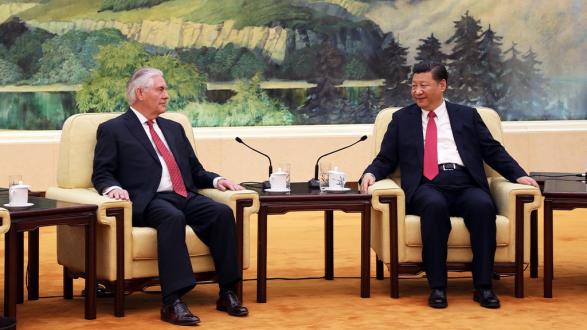 Chinese President Xi Jinping is being elevated to a status not seen since Mao Zedong and China is entering a third era since its 1949 revolution, Dr. Jeffrey Wasserstrom told Pacific Council members in a Situation Briefing teleconference on China’s 19th Communist Party Congress.

Wasserstrom is the Chancellor’s Professor of History at the University of California, Irvine.

China’s Communist Party Congress, a weeklong meeting held every five years, sets the tone and direction of China for the next five. This year’s Party Congress, which ended on October 24, formally granted President Xi Jinping a second term as the country’s leader but did not identify a successor. In his opening remarks, Xi laid out a vision of a reinvigorated Communist Party with total control of China’s economy, internet, culture, religion, and morals. Xi’s name and political ideology were incorporated into the constitution, an unprecedented honor belonging only to Xi and Mao Zedong.

"Xi is clearly the most powerful person in China," said Wasserstrom. "That’s one of the few things there is complete consensus on across the scholarly and policy world."

"There is more of a cult of personality in the way that Xi has ruled China than his two immediate predecessors."

The fact that the Party Congress did not indicate a clear successor has rekindled "speculation about whether Xi is actually planning to stay on beyond the traditional 10 years," Wasserstrom said, adding that "there is more of a cult of personality in the way that Xi has ruled China than his two immediate predecessors, Hu Jintao and Jiang Zemin. They were also president, but it’s more important to focus on them as head of the Communist Party, because that’s really where their power comes from. ‘President’ is a secondary role that they play."

Wasserstrom pointed out that even before this year’s Party Congress, Xi was known for breaking norms that previous Chinese leaders followed.

"One of those norms was that they didn’t put a lot of attention on the leader’s personality or writings until they stepped down," he said. "Whereas with Xi, books by and about him are the first thing you see when you walk into Chinese bookstores now. There has been talk of bringing Xi Jinping thought into classrooms by loudspeakers, including in Hong Kong. There has been intensive promotion by the Communist Party establishment of his slogans and writings and books, and that seems more of a throwback to the period before the last couple of leaders than a continuity."

Wasserstrom said that Xi may come up with a way to maintain power behind the scenes even if he relinquishes official titles after his two 5-year terms. He added that a third era of China has begun.

"We’ve seen signs of movement toward China opening up and we assume that they’ll somehow continue on to enormous openness and a liberal democratic system, and then that’s upended by shifts toward oppression and control."

"Whether it emerged in the wake of the Olympics or Xi’s rise or maybe it’s clearly emerging now, but there’s a good case to be made that we need to think of China in three periods post-1949," he said.

That said, Wasserstrom warned against making predictions about China, because most of the important decisions are made behind closed doors. He also said assuming that a trend line will continue is a big mistake.

"This has led us into being overly optimistic about the potential for liberalization within China," he said. "We’ve seen signs of movement toward opening up and we assume that they’ll somehow continue on to enormous openness and a liberal democratic system, and then that’s upended by shifts toward oppression and control."

"In many ways, Trump’s questioning of long-time U.S. alliances and speaking out with a skeptical tone about globalization has opened up all sorts of new possibilities for Xi Jinping at a moment when he wants to position himself as someone who is open to new alliances and is looking to have China make new connections around the world," said Wasserstrom. "At the same time, Xi has been speaking out against the flow of ideas from different parts of the world into China. He is being interpreted as someone who’s more open than in many ways he actually is."

"There’s no simple way that China can solve the North Korea situation because there’s nothing about it that’s simple."

Regarding Xi’s influence over North Korea, Wasserstrom said there are limitations that the United States does not seem to consider.

"It’s possible for a country to be very frustrated by some of the behavior of a weaker country that’s an ally, and yet not be able to completely control the behavior of that ally," he said. "That’s part of the situation between China and North Korea. There are limits to what Xi can do even if he’s very frustrated and would like some of the issues to disappear. There is a tremendous desire in Beijing for stability and circumstances it can control on its borders. The idea of North Korea imploding or regime change there could destabilize things within China by causing a flood of refugees across the border. There is also a concern about any scenario in which the Korean Peninsula is reunified in a way that makes it a clear military ally of the United States."

Wasserstrom indicated that the Trump administration should not rely too heavily on China to solve its North Korea problem.

"There’s no simple way that China can solve the North Korea situation because there’s nothing about it that’s simple," Wasserstrom said.