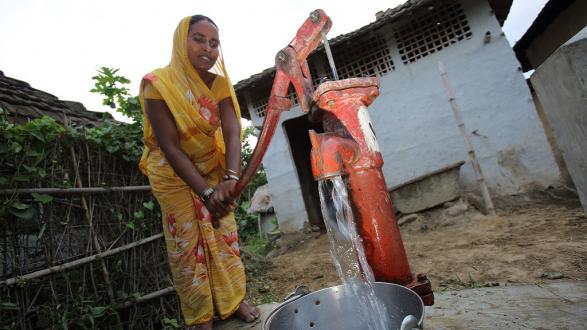 As severe droughts and other water-related crises increase around the world, no group has been affected quite as much as women and girls in developing countries.

Varsha Deshpande, a lawyer and women's rights activist in Maharashtra, India, a state hit hard by drought, told the Thomson Reuters Foundation that women are especially vulnerable in droughts because it is their responsibility to fetch water.

"She is the first to wake up, she walks the farthest to fetch water, she eats last – and probably the least – and she sleeps last," Deshpande said. "This takes a toll on her health, her menstrual cycle, and affects her reproductive cycle."

"In many countries, girls are forced to drop out of school owing to a lack of sanitation facilities, and women are harassed or assaulted when carrying water or visiting a public toilet," he said.

As the 2015 report Water for Women, published by UN Water, points out, "without access to clean water, the world’s poorest people will stay poor." This is because the time spent walking to, waiting, and collecting water is time not spent "carrying out income generating activities, caring for family members, attending school or simply looking after women’s needs and aspirations."

According to an article by Alix Lebec on womeneffect.org, the numbers are staggering:

The last point is especially important. Since water issues disproportionally affect women, they must be part of the conversation to come up with solutions.

One potential solution is WaterCredit, a small, affordable loan averaging $178 provided by microfinance institutions to families earning between $1 and $8 a day so they can afford a water connection or toilet in their home.

"The human right of access to clean water, close to home, can unlock a woman’s potential – economically, educationally, and socially," wrote Jane Wilbur in the Water for Women report. "Its absence can lock women in a cycle which is repeated from mother to daughter."​

Want more on water? Read an interview with the Pacific Council’s Global Water Scarcity Project Fellow Rachel Cardone, and the takeaways from the Council’s 2015 National Delegation on water issues.

Learn how you can directly contribute to the Pacific Council's work on global water scarcity. Support us now.