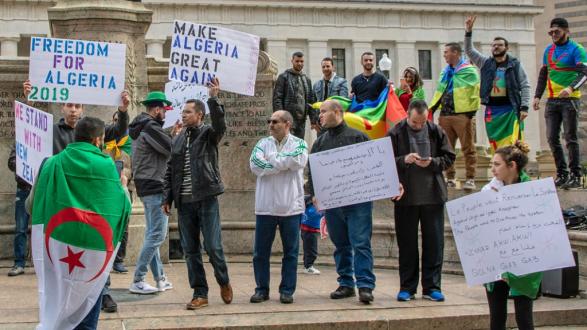 As pro-democracy protests have engulfed countries on every continent in the past month, headlines about Hong Kong and Bolivia have eclipsed one country where protest longevity is unmatched: Algeria. Algerians demanding meaningful change to their military-dominated, autocratic, and corrupt political system have taken to the streets every Friday for over nine months, and continue demonstrating today.

In April, the opposition movement won a major victory when Algeria’s 82-year-old longtime leader, Abdelaziz Bouteflika, was ousted from power. After Boutefkila’s departure, an interim government led by a military general, Gaid Salah, took over. But the protestors kept the pressure on.

The broad opposition movement known as hirak seeks to bring down individuals associated with the military-authoritarian system in place since Algeria gained independence from France in 1962. Protestors have little trust in those directly involved in the former regime and those who worked with co-opted political parties during the Bouteflika era.

This is why the elections for a new president held on December 12-13 have failed to pacify the opposition. Five days into his mandate, the new president, Abdelmadjid Tebboune—elected among a slate of regime-affiliated candidates—faced renewed and even re-energized protests.

Algerians have returned to the streets to show that they will not yield until the ruling political class is replaced.

The protestors’ confidence comes in part from the historically low turnout. Members of the opposition have claimed the turnout figures were inflated. It is difficult for Tebboune to claim a strong mandate with a mere 20 percent of the overall population supporting him in a contest that was seen as illegitimate by many in the first place.

And so, as they did after Bouteflika’s demise in April, Algerians have returned to the streets to show that they will not yield until the ruling political class is replaced. They have demonstrated creativity, perseverance, and a great sense of humor, as their fully-nonviolent marches and sit-ins have reconquered the street, creating new civic and democratic spaces and practices.

Protesters see Tebboune as very much a part of that ruling elite rather than a step toward democratic change. The protests have seen widespread support from across the political, ideological, and socioeconomic spectrum, including participation by women’s, human rights, cultural, and student organizations.

The protest movement has also created new spaces for citizens to debate major issues relating to the past, such as accountability for violence during the 1990s (including the disappeared), women’s rights, and the relationship between ethnic, religious, and national identity.

Algeria’s military, business, and political elites may have calculated that a series of concessions coupled with protest fatigue would lead the movement to fizzle out. Instead, protests have continued, with consistently large turnouts.

Algeria’s military, business, and political elites—so-called le pouvoir—may have calculated that a series of concessions coupled with protest fatigue would lead the movement to fizzle out. Instead, protests have continued, with consistently large turnouts.

One recent survey suggests that support for a complete overhaul of the political system exists within a wide swath of the population, including younger members of the military. However, survey data from the Arab Barometer showed that on the eve of the protest movement “substantial portions of the population remain[ed] worried about the potential shortcomings of a democratic system.”

What will happen next? There is evidence that the government is ready for a crackdown. It has imprisoned prominent opposition activists and used force against demonstrators, particularly in Oran, Algeria’s second city. Up to 400 protestors were arrested as police beat protestors with batons and attacked them with tear gas. Although some were released the following day, court cases were brought against protesters throughout the city, with judges handing down multiple-year sentences in some cases.

We could thus be on the precipice of an Egypt-like scenario, with the increasing willingness to use repression signaling a possible military coup to solidify control. The military, and the elites backing it, could use national unity and fears of terrorism to legitimize their actions.

We could thus be on the precipice of an Egypt-like scenario. However, unlike Egypt, where Islamists played a prominent role in post-Arab Spring politics, Algeria’s movement has been notable for the marked absence of Islamist slogans or support.

However, unlike Egypt, where Islamists played a prominent role in post-Arab Spring politics, Algeria’s movement has been notable for the marked absence of Islamist slogans or support and a complete lack of Islamist opposition.

Another scenario could mirror what happened in Sudan earlier this year, in which an agreement was forged between the military and opposition. Most recently, the former authoritarian head of state, Omar al Bashir, was arrested and sentenced to two years in jail.

Since the Algerian protests started, some members of the corrupt business elite have been arrested, and former high-level military (and opposition politicians) have been sentenced. The government also issued an international arrest warrant for former high-level military official Khaled Nezzar and his son (a wealthy businessman) on charges of plotting to attack the authority of the military and the state.

With Tebboune’s arrival in office, the military could use the opportunity to return to the barracks. It remains to be seen whether this would mean a resumption of politics as usual.

Although this could be proof of the military’s will to compromise with protesters by offering concessions, the arrests can also be understood as a purging of the elite mafia who threaten military general Gaid Salah’s continuing influence as the de facto kingmaker and authoritarian figurehead.

With Tebboune’s arrival in office, the military could use the opportunity to return to the barracks. It remains to be seen whether this would mean a resumption of politics as usual—in which the military generals play a central but backstage role in political decision making—or if Tebboune will move toward genuine civilian control, democratization, and a crackdown on corruption as demanded by the protestors.

Mieczysław P. Boduszynski is a Pacific Council member, an assistant professor of politics and international relations at Pomona College, and a former U.S. diplomat.

Jessica Mecellem, Ph.D., is teaching assistant professor of politics at the University of the South, Sewanee. She has conducted and published research on Algeria.

This article was originally published by the Globe Post.