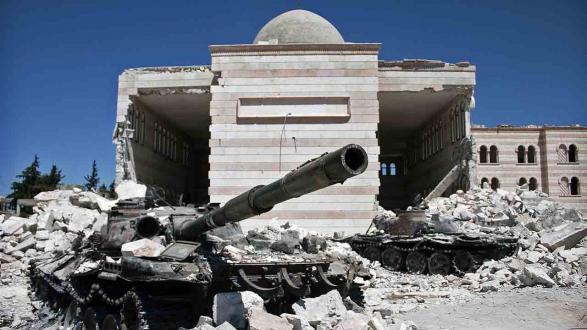 Russia is building military bases in Syria and sharing intelligence with Iraq and Iran. U.S. officials are having conniptions about it, but why? The Russians apparently learned little from their miserable years in Afghanistan and now are heading for a debilitating exercise in futility. If Washington is lucky, perhaps that will distract Moscow from its current efforts to undermine NATO and destabilize parts of Eastern Europe.

The lessons of America's grim misadventure in Vietnam also seem lost on the Russians. Listen to Lyndon Baines Putin at the United Nations General Assembly on September 28: "I believe it is of the utmost importance to... provide comprehensive assistance to the legitimate government of Syria." The Syrian government is even less legitimate than was the corrupt South Vietnamese government that the United States propped up for so long, but Putin will not relax his embrace of Bashar al-Assad.

Putin has always seemed shrewd, if unscrupulous, but he has misjudged the mess in the territory that used to be Syria. The Assad regime controls just a small fraction of what was once a nation, while the Islamic State and the Al Qaeda affiliate Jabhat al-Nusra enjoy success on the battlefield and in attracting new recruits. Russia has sent aircraft that will be deployed against the anti-Assad forces, but the Russian commanders will soon learn another Vietnam lesson: air power cannot win an asymmetric war.

With the Russian economy in serious trouble, Putin may be grasping at this new venture to generate a surge of patriotism to help keep him afloat politically.

Once the reliance on air strikes proves unproductive, what’s next: ground troops? Prepare for a river of body bags flowing back to Mother Russia. Determining who the better fighters are – the mujahidin of Afghanistan, or the Islamist fighters in Syria – will be a bloody contest. Of particular note is that among the Islamic State soldiers are Chechens, whose hatred of Russia knows no bounds. Once those Chechens sniff Russian troops in the neighborhood, the knives will be out, literally. The Russians will be lucky if they can attain even a stalemate. U.S. policymakers should pay attention so as to better understand the folly of military intervention in this region (as if the Afghanistan and Iraq wars were not lessons enough).

The purpose of Russia's adventurism is unclear. Russian news media have shifted their coverage away from Russia's noble liberation efforts in Ukraine, concentrating instead on the noble confrontation with terrorists in the Middle East. With the Russian economy in serious trouble, Putin may be grasping at this new venture to generate a surge of patriotism to help keep him afloat politically.

"Resurgent Russia," recently so intent on causing problems in its own neighborhood, is now traveling afar to once again bleed on foreign soil. The United States should watch and learn.

What makes this new Russian strategy even odder is that Putin himself apparently knows that trouble may lie ahead. In his United Nations speech he said: "It seems, however, that far from learning from others' mistakes, everyone just keeps repeating them... aggressive foreign interference has resulted in a flagrant destruction of national institutions and the lifestyle itself."

He is correct, but logic cannot overcome hubris. "Resurgent Russia," recently so intent on causing problems in its own neighborhood, is now traveling afar to once again bleed on foreign soil. The United States should watch and learn.

Phil Seib is Professor of Journalism and Public Diplomacy and Professor of International Relations at the University of Southern California. He served as director of USC’s Center on Public Diplomacy from 2009-2013. His most recent book is Real-Time Diplomacy: Politics and Power in the Social Media Era.