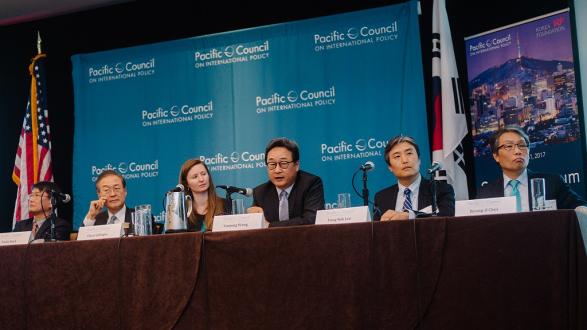 South Korea and the United States should keep their mutually beneficial free trade agreement in place, experts told guests of the Pacific Council and the Korea Foundation during the SeouLA Forum in downtown Los Angeles.

SeouLA convened dynamic business, civic, government, and academic leaders from the United States and South Korea to exchange ideas and discuss key bridges in the U.S.-Korean relationship, including trade policy, innovation, and economic and cultural ties.

"U.S.-Korea economic relations in general look very strong. I’m sure it’ll remain strong for many years to come, as long as the [free trade] agreement remains in place."

"Maybe it is too early to have an overall evaluation after only five years, but even so, it is fair to say that KORUS enables Korea and the United States to accomplish mutually beneficial trade relations despite the sluggish global trade flows," said Bark. "U.S.-Korea economic relations in general look very strong. I’m sure it’ll remain strong for many years to come, as long as the agreement remains in place."

Gillispie said there is "an incredibly positive role for U.S.-Asia energy trade in particular."

"Countries are looking for the supplies and choices that best provide three core needs: economic security, environmental security, and geopolitical security," she said. "Korea has been quite thoughtful and one of the leaders in the region in terms of codifying its national framework for its energy policy. Trans-Pacific trade can play a powerful role in addressing these goals."

She added that there are a number of areas where collaboration "should and ultimately very easily could support common goals for both the United States and countries across Asia, including Korea."

"There is an incredibly positive role for U.S.-Asia energy trade in particular. Trans-Pacific trade can play a powerful role in addressing these goals."

Wang pointed out that South Korea’s current political turmoil is negatively impacting the country’s economic growth this year. President Park Geun-hye was recently impeached, removed from office, and later arrested for charges of corruption and influence-peddling.

"Without strong political and policy responses to the economy, our growth rate, particularly this year, looks very pessimistic," Wang said. "However, we have some good news—and that is because of the United States. We expect our exports to the United States will grow this year. We expect the U.S. interest rate will grow, and our economy will be in better shape. The gap is narrowing between U.S. and Korean interest rates."

He also noted that South Korea is experiencing a rapid demographic change due to its aging population, which is having a negative impact on the economy.

"The older generation is experiencing an increased life span, but no appropriate pension or other means to support them in retirement, so they have to work," he said. "Most older people are not beneficiaries of the national pension scheme. They have to rely on themselves. As people entitled to the national or other private pension schemes grow older, this problem will disappear. In the meantime, our savings rate will grow. Korea’s current account surplus is expected to disappear by 2042 as it becomes one of the most aged economies in the world."

Lee talked about the changing tide of public opinion on free trade and made the case that the impact of technological change, rather than trade, is much stronger on labor markets.

"I think everyone has felt a wind of change in terms of trade," he said, adding that free trade agreements may be entering a period of crisis. "The United States no longer believes in the benefits of multilateral free trade agreements. Trump’s approach is ‘fair,’ bilateral trade. The underlying concern in these shifts in trade policy around the world is basically about the loss of jobs. There’s an increased perception that trade and globalization destroys jobs and negatively impacts wages. There is conflicting evidence and one can use whatever evidence they want to pursue their political trade agenda. But technological advances have a much stronger impact on the decline of the labor market than imports from Asia. Governments should focus on retraining these workers with new skills."

Lee added that Korea’s exports to the United States are predominantly tech-based. He said Korean firms can offer technology training as part of fair trade, not just to employees but through general outreach training programs.

"It could be goodwill that translates to better bilateral trade relations," he said.

Choi said that KORUS has had a positive effect on economic competition in the region.

"When Korea was negotiating the agreement with the United States in 2006, it generated dynamic competition in the region," he said. "Because of this, China was anxiously trying to strike a balance, so the Korea-China Free Trade Agreement was initiated. It created a ripple effect."

Now there are many trade agreements being negotiated in Northeast Asia, Choi pointed out, including the China-Japan-Korea Free Trade Agreement, the Regional Comprehensive Economic Partnership, ASEAN+3’s Asia-Pacific Regional Economic Cooperation, and the Trans-Pacific Partnership (TPP).

"A lot of trade experts believe the U.S. withdrawal from TPP is an opportunity missed. It’s been a win-win for China."

"A lot of trade experts believe the U.S. withdrawal from TPP is an opportunity missed," said Choi. "Because of Brexit and the election of Trump and so on, a lot of people are talking about the beginning of the end of the global trading regime we’ve been building for a long time. It’s been a win-win for China. They’ve been able to create a middle class, for example."

As for the future of KORUS, Choi said that a renegotiation will be difficult for both sides.

"It took five years to negotiate the [agreement]," he said. "All of South Korea was divided on the issue. If the United States tries to amend the agreement, Korean negotiators will be faced with a tough job: how to address U.S. concerns and at the same time dealing with domestic politics. If the agreement is amended, it will provoke China to further accelerate their change from factory China to consumer China."

Read more about SeouLA, including a summary of Tony Seba’s keynote address and a summary of the first panel on economic revitalization through new technology.