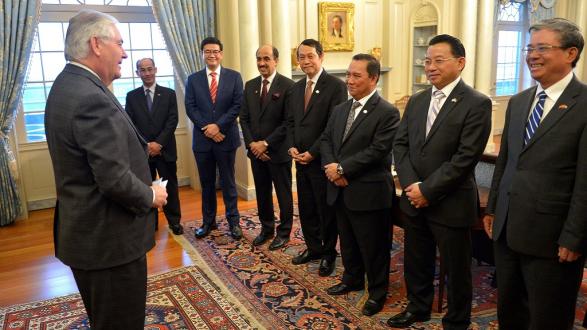 Altbach is senior vice president of the Albright Stonebridge Group. Lynch is an associate professor of international relations at the University of Southern California. The discussion was moderated by Ms. Sandy Pho, senior program associate at the Wilson Center’s Kissinger Institute on China.

The Obama administration’s signature policy in the Asia-Pacific was a “rebalance” to reflect the growing importance of the region to U.S. national interests.

"In the Clinton, Bush II, and Obama administrations, there was a remarkable bipartisan consensus on our broad strategic stake in Asia," said Altbach.

He added that "the main elements of Asian policy were fairly consistent in terms of the acknowledgement of the huge economic stake in the region, the shift of the global center of gravity for dynamism in the global economy towards the Asia-Pacific, the need to have a very robust economic strategy with U.S. partners, the need to shore up alliances and make them relevant to this new strategic environment in the region, and the desire to have a China policy that both created a more effective set of institutional relationships with key Chinese decision makers and expanded cooperation in areas of mutual interest."

"In the Clinton, Bush II, and Obama administrations, there was a remarkable bipartisan consensus on our broad strategic stake in Asia. Now, things are different."

Now, Altbach said, things are different. Indeed, President Trump’s more aggressive stance towards China has alarmed Beijing, he told members, especially as it relates to diplomatic recognition of Taiwan and the looming prospect of a trade war with the United States.

"We’re in early days in the Trump administration, so there’s still a lot of uncertainty about how things will proceed," said Altbach. "That said, the track record so far gives rise to some confusion. On the one hand, we have some real turbulence in Asia policy with President Trump taking the congratulatory phone call from the president of Taiwan and making comments about potentially not being bound by the ‘One China’ policy unless China makes some concessions to the United States on economic issues or cooperation on North Korea. That created very serious concerns in Beijing and really threatened to embark on a new era of U.S.-China confrontation. The Chinese, quite cleverly, decided not to overreact."

Lynch said that the Trump administration’s approach to China will depend on how the Chinese Communist Party decides to manage Trump.

"The first thing it could try to do is bait or provoke the president and then exploit the reaction for soft power gains," said Lynch. "We can see opportunities for China to take advantage of the chaos in the Trump administration. So far Beijing does not seem to be doing that as much as they could. The second thing China can do is realize that it needs and actually benefits enormously from a strong United States."

"We can see opportunities for China to take advantage of the chaos in the Trump administration. So far Beijing does not seem to be doing that as much as they could."

Lynch agreed that China’s response to the Taiwan call and Trump’s reversal on the "One China" policy was mild considering the other possibilities.

"What could China be doing that it’s not?" he said. "Here we can draw strong, important contrasts to what Russia has apparently been doing in the United States: trying and possibly succeeding in manipulating and employing massive hacking in the U.S. presidential election, and using bots to flood social media with comments on news articles. The Obama administration and the Xi administration actually agreed on measures that resulted by late 2016 in a significant wind-down of Chinese hacking of the United States. We don’t see anything like that with the case of Russia. It looks like the approaches China takes will have a really important impact on the policies the Trump administration adopts toward China."

Regarding Southeast Asia and the Association of Southeast Asian Nations (ASEAN), Lynch and Altbach pointed out that members of the Trump administration have not said much about the region.

"There are real question marks about how much investment they’re willing to make in ASEAN," said Altbach. "We haven’t heard any particular interest from either Trump himself or most of his team. They will likely strengthen security relationships among the ASEAN countries regarding the South China Sea, but we’ve undermined those relationships by pulling the plug out of Trans-Pacific Partnership. That is tremendously damaging to our credibility with all of our partners among TPP members, and leaves us on the outside looking in for regional trade negotiations, setting the rules for trade in the region, and leaving us at a disadvantage in terms of market access. The bilateral approach is not only more onerous, it cannot replicate the value of having common rules across the entire region as the TPP would have done."

"If President Xi visits Mar-a-Lago, I think he will be in a position to educate, guide, and instruct President Trump."

On environmental cooperation, Altbach said it has been a "bright spot" in U.S.-China relations during previous administrations, but that it does not have the same political support from the Trump administration.

"Here is one area in which Xi Jinping could educate, guide, and instruct President Trump," said Lynch. "We know that he is susceptible to this type of guidance on the part of foreign leaders, for example when Japanese Prime Minister Shinzō Abe visited Mar-a-Lago. If President Xi visits Mar-a-Lago, I think he will be in a position to do precisely the same thing."

Lynch and Altbach both offered advice to the Trump administration.

"Study more, read more," said Lynch. "Listen to people from the previous administration. Listen to people in the permanent bureaucracy. Don’t view it as the ‘deep state.’ Don’t view those people as your enemies, but as people you can learn from. Spend the first six months to a year learning, and then we’ll talk about making fundamental changes after that."

Altbach added that there are very sound reasons for the decisions made in recent years that have shaped the U.S. approach towards China.

"Some of the easy fixes, the dramatic, new, aggressive actions that are easy to talk about on the campaign trail, in many cases they have a very substantial downside that is worse than whatever potential benefit that they might reap," he said. "The reason a lot of these policy alternatives haven’t been implemented is because if you look into them more closely, they’re terrible ideas. I hope that a very comprehensive and thorough vetting of new initiatives takes place before they roll out new strategies."