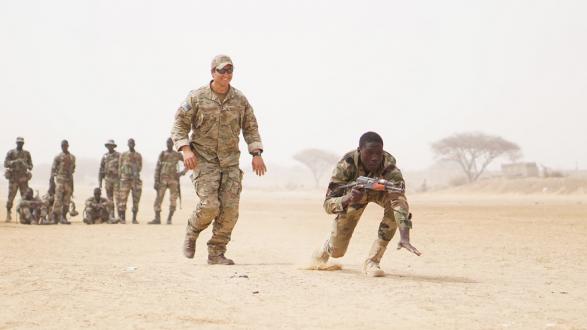 From nuclear war on the Korean Peninsula to the dissolution of the Iran nuclear deal for political reasons, there are several major hotspots around the world where conflict has the potential to break out. International Crisis Group President and CEO Dr. Robert Malley wrote about 10 such conflicts to watch in 2018 and recently discussed them with Pacific Council members. The discussion was moderated by Ms. Marissa Moran, senior communications officer at the Pacific Council.

"Historically speaking, this is far from being the most violent era that we have experienced in history, but our position at the International Crisis Group is that one death from conflict is too many," said Malley. "That said, we have noticed several things of late, including more conflicts and a more militaristic approach to them, which means we are likely to see more of them develop in the future unless we reinvest in diplomacy and reinvest in the kind of efforts that will prevent conflicts from emerging in the first place."

He added that the United States has recently withdrawn from diplomacy while the presence of U.S. troops around the world has increased. He stressed the need for understanding other points of view in order to better negotiate peace.

"We can’t neglect the long-term tools to fight terrorism, including economic and diplomatic tools. Military strikes without these tools are not as effective."

"We believe first and foremost we must know what the people who are fighting are thinking," he said. "If we don’t know how they are thinking, how will we ever resolve these conflicts?"

Malley also explored the question of whether the money on counterterrorism efforts has been well spent.

"Are we overly focused on the question of terrorism, and are we excessively militaristic in our response to it? The answer is yes," he said. "The United States needs to understand the impact of the counterterrorism measures in the country where they are being applied. Things like drone strikes risk alienating communities the United States is trying to help. We can’t neglect the long-term tools to fight terrorism, including economic and diplomatic tools. Military strikes without these tools are not as effective."

On China and North Korea

Malley said that China’s rise was inevitable, and that the United States must now think about dealing with another global superpower as it has done before.

"The good thing is, the more involved China is in the world, the more they will care about how the world is governed," he said.

That includes North Korea, which he said China will help put pressure on as long as it doesn’t lead to conflict or regime change.

"The North Korea situation is like two freight trains headed toward each other with no brakes at this point," he said. "The human cost of conflict will be unthinkable if this is not resolved."

He added that China can help the United States broker a deal on the Korean Peninsula, but that China may not be interested in seeing a reunified Korea because it would inevitably lean towards the South Korean model and could threaten Chinese power and influence in the region.

"North Korea is not acting irrationally," he said. "From a North Korean perspective, this is self-defense. They feel that the Korean War never ended. They feel threatened by the United States. They look around the world and they see what happened to Muammar Gaddafi in Libya, who had no nuclear weapons and was overthrown and then killed. They look at Saddam Hussein in Iraq with what happened there. They had no WMD program. The regime was toppled and he was killed."

"The more the North Koreans develop their program, the more the United States sticks to its 'red line,' the more confrontation becomes possible."

"From the United States point of view, which is equally not irrational, is that if they allow North Korea to develop the ability to strike the continental United States with a nuclear missile, that also is unacceptable," he said.

The most important thing that is lacking in the North Korea situation is time, Malley said.

"The more the North Koreans develop their program, the more the United States sticks to its 'red line,' the more confrontation becomes possible," he said. "Let’s put some time on the clock for the chance of diplomacy to negotiate first a shorter term outcome, where we make sure the rules of the game are understood, and a longer term outcome, which might have to involve the world accepting North Korea as a nuclear state. I don’t think it’s going to be easy to wind that clock back. But with limitations, security guarantees for all sides, and some assurance for North Korea that we’re not out to change their regime, but also assurances for the United States and others that North Korea is not going to use its nuclear weapons either by deploying them or using them to blackmail South Korea or Japan to get the concessions it wants."

Malley said that conflict areas like the Sahel in Africa need more media coverage. Right now most observers only look at the region through the lens of terrorism, which misses a huge part of the story, namely conflict over resources, corruption, and a lack of good governance.

"There are other countries who have the blessing or the curse, in these cases the curse, of being less of an international state," he said. "Fewer people are focused on Africa, yet the fact that people don’t look at them and don’t always focus on them means that they are neglected when it comes to diplomacy and conflict resolution because what you don’t see or hear about, you don’t care about."

Malley argued that the focus needs to be on "spreading the wealth, power, and resources" in the region, which is easier said than done.

"We need to take local grievances in the Sahel into account and get the U.S. government, the European Union, and the African Union to work together to create global partnerships in order to help heal problems in Africa."

One thing to watch in the near future, Malley said, is "climate change wars," which are conflicts caused by dwindling resources including water.

"We need to take local grievances in the Sahel into account and get the U.S. government, the European Union, and the African Union to work together to create global partnerships in order to help heal problems in Africa," he said. "There’s huge potential for success in this area."

He added that conflicts playing out in places like Yemen and Syria make it clear that the lack of water is one of the sources of the unrest.

Malley said it is important that western powers understand Russian complaints about the West meddling in their election and government, not just the other way around.

"This isn’t ‘what-about-ism,’ but we need to know what complaints they will bring to the table to better prepare for negotiations," he said. "Russia thinks the United States took advantage of them after the Cold War and then expanded NATO. This also resonates with average Russians. They point to Vietnam and Iraq as counterarguments when the United States accuses them of aggression."