An Update on the USMCA Trade Agreement—Getting Closer
Mexico 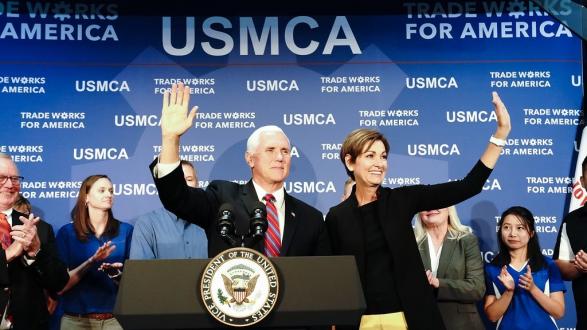 Congressional approval of the USMCA trade agreement crept forward in recent weeks, with indications, but unfortunately not clear signs, that it will be ratified before the end of the year. At the same time, migration tensions between Mexico and the United States abated as Mexican efforts to deter the northward flow of Central Americans seemed to be successful, while the spectacular failure of Mexico’s attempt to arrest one of the leaders of the Sinaloa drug cartel revived security concerns as a top tier bilateral matter.

The Mexican economy remains stagnant, reflecting weak investment that continues to be driven by the USMCA delay and government actions that undermine investor confidence.

It has been over a year since negotiations for the new USMCA were completed, and congressional Democrats and the White House continue to search for a compromise that will convince House Speaker Nancy Pelosi to bring the agreement up for a vote. A major sticking point continues to be enforcement of the agreement’s labor provisions, but progress seems to be taking place.

It has been over a year since negotiations for the new USMCA were completed, and congressional Democrats and the White House continue to search for a compromise that will convince House Speaker Nancy Pelosi to bring the agreement up for a vote.

Following a two-hour conversation with President Andrés Manuel López Obrador (AMLO) in Mexico City in early September, AFL-CIO President Richard Trumka softened his tone on the USMCA. Rather than dismissing ratification out of hand, Trumka tweeted that he wants to get to “yes,” but continues to have concerns about enforcement.

Five Democratic congressmen then traveled to Mexico City in early October where they met with AMLO and key members of his cabinet. They came away convinced that the AMLO administration is committed to meeting the labor provisions of the agreement, and to implementing a new Mexican labor law approved earlier this year specifically for this purpose. But the congressmen are not fully convinced of Mexico’s capacity to do so.

They thus made it clear that ratification of the USMCA depends on Mexico’s ability to implement its Labor Reform. To alleviate their concerns, the AMLO team agreed to increase the budget for the Labor Ministry by $900 million (U.S.) to ensure sufficient financing for implementation of the Labor Reform, and sent its chief USMCA negotiator, Deputy Foreign Minister Jesús Seade, to Washington to reinforce this message.

Contrary to what some analysts suggested when the Democrats announced the start of the impeachment inquiry against President Donald Trump, impeachment is not taking attention away from the USMCA.

For its part, the AFL-CIO is insisting on the opportunity for arbitration should Mexico not meet its commitments, and the power to immediately block exports that violate the labor provisions of the agreement. The Democratic House leadership, meanwhile, continues to insist that they will not move forward with a vote without the support of Labor. It is reported that the U.S. Trade Representative’s Office agreed to binational inspection teams to ensure that Mexico meets its USMCA commitments, but the two sides have not yet agreed to penalties for failing to meet these commitments.

Other developments also suggest that the two sides are getting to “yes.” Contrary to what some analysts suggested when the Democrats announced the start of the impeachment inquiry against President Donald Trump, impeachment is not taking attention away from the USMCA. To the contrary, it is actually adding pressure on Pelosi to pass the trade agreement.

Pelosi wants to demonstrate that the Democrats can make headway on legislation that matters to voters’ everyday lives while also investigating the president. Since there are enough votes in both houses of Congress to pass the USMCA if Pelosi were to bring it up, this would be an easy win. Passing this free trade agreement will also help Democrats representing districts won by President Trump in 2016, especially given their likely upcoming vote for impeachment.

It is worth remembering that this trade agreement, when passed, will contain the strongest labor provisions of any trade agreement the United States has ever negotiated.

All of which helps to explain Pelosi’s insistence that passage of the agreement will be a victory for the nation, not just for President Trump, and her statement that the negotiations are “on a path to ‘yes.’” The question is, can they get to “yes” this year, before the legislative process is further polluted by the presidential election campaign? My estimate is 60/40 that the agreement will be ratified before the end of the year.

My own view continues to be that the USMCA, despite including some elements of managed trade that could be bad for U.S. manufacturing in the long run, is nevertheless a strategic initiative that merits the full support of Congress. While I understand the Democrats’ desire to strengthen the labor provisions of the agreement, it is worth remembering that this trade agreement, when passed, will contain the strongest labor provisions of any trade agreement the United States has ever negotiated.

Also, the United States’ partner, in this particular instance, is an administration in Mexico that clearly favors and supports bona fide labor reform in Mexico. But beyond labor, the agreement represents the affirmation of Mexico and Canada as strategic partners, and the endorsement of a North American approach to U.S. competitiveness, which I believe is critical to the United States’ long-term success. I urge congressional Democrats to support bringing the agreement to a vote this year.

U.S.-Mexico Relations Beyond Trade—Immigration and Security

Mexican Foreign Minister Marcelo Ebrard met with U.S. Vice President Mike Pence in Washington on September 10, the end date of the 90-day window the United States gave Mexico to dramatically reduce the flow of Central American migrants through Mexico. Ebrard was able to demonstrate considerable progress—a more than 50 percent drop in apprehensions at the U.S. southern border since May.

Pence characterized Mexican actions that produced this outcome as “meaningful and unprecedented.” President Trump spoke with AMLO by telephone the next day, deeming the conversation “excellent,” and later lauded Mexico’s border security efforts in his September 25 United Nations speech. It does not matter that the reduced flow of migrants is also due to bad summer weather, changes in U.S. asylum policies, and smugglers recalibrating their strategies to their new operating climate. For now, at least, the Trump administration is singing Mexico’s praises.

Security relations between the United States and Mexico have operated mostly under the radar during the Trump era. That changed in the wake of a failed Mexican effort to capture Ovidio Guzmán, the drug-trafficker son of Joaquín "El Chapo" Guzmán.

Security relations between the United States and Mexico have operated mostly under the radar during the Trump era. That changed in the wake of a failed Mexican effort to capture a leader of the Sinaloa Cartel at the behest of the United States: Ovidio Guzmán, the drug-trafficker son of Joaquín "El Chapo" Guzmán.

This shocking defeat turned downtown Culiacán, Sinaloa, into a war zone and caught the attention of the U.S. government, worried about what it suggests for stability in Mexico. It is also apt to embolden organized crime and severely dent public confidence in a security strategy that is focused on fighting poverty and avoiding bloodshed rather than confronting organized crime. It could also undercut confidence in a president who insists that he was unaware of such an important security operation, one that has sharply divided public opinion

President Trump called AMLO on October 19 to express U.S. support for Mexico in the battle against organized crime but, according to Ambassador Christopher Landau, Trump is also now concerned about stability in Mexico. Indeed, a high-ranking U.S. Department of State official noted during congressional testimony on October 23 that Mexico needs to develop, and share with the United States, a comprehensive strategy for fighting organized crime.

Both sides seem determined to cut through bureaucratic barriers to cooperatively implement detection technologies at the border to freeze the southward flow of arms.

During his phone call with President Trump, AMLO asked for U.S. assistance in implementing detection technologies at the border to freeze the southward flow of arms, like those in the hands of the Sinaloa Cartel. Trump agreed, and the two sides held a follow-up meeting on October 21 at the U.S. Embassy in Mexico City and agreed to meet every two weeks to follow up with what has been dubbed “Operation Frozen.”

Both sides seem determined to cut through bureaucratic barriers to cooperatively implement this new program. But its success will depend as much on Mexico as on the United States since it will require Mexico to restructure how it manages the border posts where the technology would be employed.

Michael Camuñez is a Pacific Council Director, head of the Council's Mexico Initiative, and president and CEO of Monarch Global Strategies.