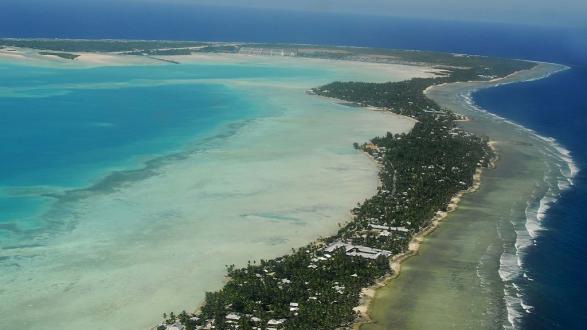 Forty years have passed since the signing of the 1979 Treaty of Friendship between the United States and the Republic of Kiribati. Although the treaty was subject to termination 10 years after going into effect, the United States and Kiribati continue to affirm the so-called “Treaty of Tarawa” as a framework for maintaining bilateral relations.

Indeed, the language of the treaty provides a strong basis for additional cooperation. Article 2 states:

“The two Governments, in the spirit of friendship existing between them, shall consult together on matters of mutual concern and interest in time of need, and, in particular, to promote social and economic development, peace, and security in the Pacific region. Any military use by third parties of the islands named in the preamble shall be the subject of such consultation.”

As the United States strengthens its engagement with Pacific island countries (PICs), it is time to look once again at the spirit of this important treaty.

Reviewing the 1979 Treaty of Friendship takes on even greater significance as the United States begins to renegotiate the Compacts of Free Association with the Marshall Islands, Micronesia, and Palau. The imperative to close some of the gaps in assistance and cooperation with the Freely-Associated States corresponds with broader U.S. security concerns in the region, particularly countering China’s expanding influence. American priorities in the Pacific, while recognizing Chinese encroachment, should remain focused on implementing a comprehensive policy toward the PICs.

Kiribati plays an important historical role for the United States in the region. It straddles a key route across the Pacific to Asia. Many Americans recall that Amelia Earhart was likely lost flying over Greater Micronesia. The U.S. Marine Corps landing on “Bloody Tarawa” in 1943 is an indelible memory from the island-hopping campaign of the Pacific Theater.

The United States should work closely with its Pacific allies, particularly Australia and Japan, as part of the ongoing trilateral strategic dialogue to enhance ties with Kiribati.

In the aftermath of World War II, a strong argument could have been made for Kiribati to become one of the American territories and subsequent member of the Freely-Associated States with the Marshall Islands, Micronesia, and Palau. Instead, it was restored to the United Kingdom in 1945. Strategically, Kiribati’s Exclusive Economic Zone (EEZ) is the 12th largest in the world. It stretches from Hawaii to Guam and uniquely bridges most of the distance between Hawaii and Australia. It also shares the world’s largest Marine Protective Zone joined with the United States. The 2013 Treaty on the Delimitation of Maritime Boundaries further cemented relations between the United States and Kiribati.

In 2008, the United States and Kiribati renewed additional cooperation at the time of the 65th anniversary of Bloody Tarawa. Kiribati signed a ship-riders agreement with the United States that allowed increased protection of its EEZ. INDOPACOM (then U.S. PACOM) made Kiribati a key element of its Pacific Partnership Program. Using its humanitarian assistance funds, INDOPACOM constructed a steel and concrete bridge between Tarawa’s northern and southern atolls. U.S. Embassy Suva assigned an officer to travel to Tarawa frequently in order to enhance relations and assess assistance needs.

The United States should work closely with its Pacific allies, particularly Australia and Japan, as part of the ongoing trilateral strategic dialogue to enhance ties with Kiribati. Australia has played an important role in Kiribati’s current development. Indeed, Australia is the single largest bilateral aid donor to Kiribati. In 2019-20, Australia plans to spend over AU$27 million in official development assistance on projects ranging from health to education to policy reform. The government of Japan recently provided assistance worth approximately AU$11 million to the government of Kiribati through its Economic Social Development Program.

The United States should link assistance to Tarawa’s own efforts to combat the negative impacts of climate change, especially sea-level rise.

Moreover, the United States should link assistance to Tarawa’s own efforts to combat the negative impacts of climate change, especially sea-level rise. Kiribati’s 2014 purchase of land on the Fijian island of Vanua Levu in order to address possible population movements and greater food security opens the door for specific five-country cooperation in a key area. Working with Fiji on land management, rural development, health, and water and waste management issues on this Fijian island presents a promising opportunity for assistance to Kiribati before these issues overwhelm its infrastructure.

Fiji is the only country to agree to accept potential environmental refugees from Kiribati. As a result of climate change, the Pacific is expected to encounter more cyclones and other natural disasters. The government of Kiribati has no immediate plans to relocate to Fiji, but in the case of a natural disaster, such as tsunami or cyclone, Vanua Levu would be a possible refuge even before sea-level rise becomes a greater issue. By working with Fiji, the United States and its regional partners would also show that they recognize the central role that Fiji plays in the Pacific, particularly highlighting its willingness to be a safe haven for disaster migrants.

Another potential opportunity for cooperation would be for the University of the South Pacific to encourage I-Kiribati students to attend its main campus in Suva. Courses in the I-Kiribati language and efforts at cultural preservation would also allay Kiribati’s fear of cultural extinction as a small nation facing destruction and displacement from climate change.

These efforts should be harmonized through a gender-sensitive approach that ensures protection of women and other vulnerable populations.

The U.S. Embassy in Suva is well positioned to coordinate a comprehensive whole-of-government approach. INDOPACOM has in place mechanisms to use its security cooperation framework established by Pacific partnership participants. The Center for Excellence and the Asia-Pacific Center for Security Studies in Honolulu are poised to focus work on this issue. Similarly, the Nevada National Guard‘s special partnership program can continue to work with the Royal Fijian Military Force (RFMF) as well as Kiribati law enforcement elements.

The USAID Ready project assists regional governments to develop and implement environmental and disaster mitigation strategies particularly for humanitarian assistance/disaster response preparedness and recovery. Peace Corps and National Oceanic and Atmospheric Agency resources earmarked for Fiji and Kiribati could also be enlisted to support this project. Other U.S. agencies would engage as appropriate for a comprehensive whole of government approach.

These efforts should be harmonized through a gender-sensitive approach that ensures protection of women and other vulnerable populations. Fiji and Kiribati would ensure that humanitarian assistance and disaster response planning would be consistent with the overall implementation of respective National Action Plans on Women, Peace, and Security.

The United States can work with partner countries to use existing resources in a more coordinated manner in order to achieve immediate progress toward mitigating the negative impacts of climate change.

As a charter member of the Secretariat of the Pacific Community (SPC), the United States should also review how additional assistance would be channeled especially through its Secretariat of the Pacific Regional Environment Program (SPREP). The SPC’s overall activities are consistent with the priorities of the UN’s Sustainable Development Goals. It should be noted that four Americans have served as the SPC Director-General.

As part of this review, the United States should seek to harmonize assistance through the SPC to Kiribati, Marshall Islands, Micronesia, and Palau where appropriate. This could be expanded to include the territories of Guam, Northern Mariana Islands, and American Samoa for a more integrated approach. The U.S. Coast Guard has a well-established relationship with the SPC, particularly regarding search and rescue efforts, that could further enhance regional maritime endeavors.

In summary, the United States can work with partner countries to use existing resources in a more coordinated manner in order to achieve immediate progress toward mitigating the negative impacts of climate change, bolstering Fiji’s leadership role in the Pacific, and providing adequate development and emergency planning assistance to Kiribati.

This article was originally published by the Center for Australian, New Zealand & Pacific Studies at Georgetown University.