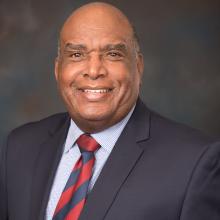 Ambassador C. Steven McGann, Founder, The Stevenson Group, specializes in providing strategic counsel to companies and orgainzations seeking to expand their operations into the United States, Asia-Pacific, Africa and Latin America markets. He served as as Senior Adviser of the Dwight D. Eisenhower School for National Security and Resource Strategy at the National Defense University (NDU) in Washington, D.C. He previously was the Vice Chancellor of the College of International Security Affairs (CISA) at NDU (2011-14), focusing on building global counter-terrorism partnerships. His principle responsibilities at NDU include developing curriculum for implementation of the U.S. National Action Plan on Women, Peace and Security, The Joint Land Air Sea Strategic- Special Program (JLASS) and lecturing on State-Defense Coordination. He was the United States Ambassador to the Republics of Fiji, Nauru, Kiribati, and the Kingdom of Tonga and Tuvalu (2008-11). Ambassador McGann was assigned as Charge d’Affaires (ad interim) of the United States Embassy in Dili, Timor-Leste (2014). As a career Foreign Service officer, his achievements centered on democracy-building, law enforcement cooperation, maritime security, humanitarian assistance, disaster response and the expansion of U.S. diplomatic presence in the Pacific.  Ambassador McGann has a Bachelor of Arts from Claremont McKenna College (1973). He pursued graduate studies at Cornell University (1975-78). McGann earned a Master of Science degree from the Industrial College of the Armed Forces, NDU (2003). He is a graduate of the Naval War College’s Fourth Joint Force Maritime Commander Component Course (2007). He currently serves as a member of the Board of Trustees Claremont McKenna College.