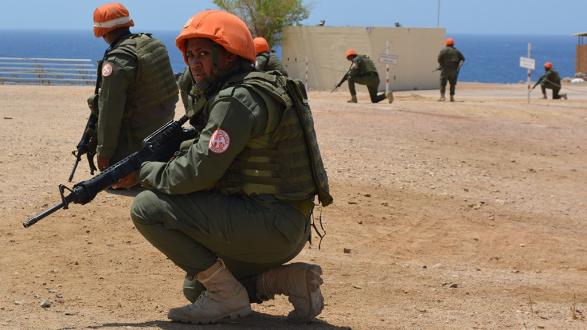 The United States and Fiji have a historically close relationship. The elections of 2014 put the relationship back on a steady keel. This is important because the dynamics in the Pacific have changed dramatically over the past decade, and Suva is an important regional post for diplomatic, economic, and security initiatives.

Washington should look anew at its relations with Pacific Island Countries (PICs), particularly as it begins to focus greater attention on the important role of the Melanesian states in Pacific architecture. Given Fiji's stature as a regional leader of the PICs, revitalizing military-civil cooperation with Suva would serve to strengthen these ties.

The impending general election is an important marker demonstrating Fiji’s relative political stability. The pending independence referendum in New Caledonia might soon bring another Melanesian state with a viable economy and democratic traditions into policymakers’ overall understanding of PIC relations. Similarly, the Autonomous Bougainville Government has declared a referendum for independence from Papua New Guinea to be held next year.

Papua New Guinea’s hosting of APEC 2018 will bring greater attention to the country and region. The invitation to PIC leaders to meet on the margins of the APEC 21 in Port Moresby provides an opportunity to enhance regional coordination and perhaps achieve progress on the situation in West Papua.

Because U.S. law requires the freezing of military assistance to any country whose democratically elected government is overthrown by a military, Fiji’s 2006 coup significantly reduced Washington’s ability to conduct normal ties.

Beyond this constructive attention to the region, APEC would provide additional focus on the role of multilateral cooperation and coordination. The United States played an important role in helping to construct a viable regional architecture in the post-World War II era. The critical pieces of this architecture are hosted by Melanesian countries and include the Secretariat of the Pacific Community (SPC), the Forum Fisheries Agency (FFA), the Pacific Islands Forum (PIF), and the Melanesian Spearhead Group (MSG). The United States has longstanding formal relations with the SPC and FFA, partners with the PIF, and is broadening its engagement with the MSG.

The MSG has an ambitious regional integration agenda that includes Indonesia and Timor-Leste. Its goals under the framework of governance and sustainable development include cooperation on climate change, security, trade, investment and economic cooperation, fisheries, and culture and sports—all of which are consistent with U.S. activities in the region. Security assistance is the linchpin of U.S. Pacific Command regional activities. The annual Pacific Partnership exercise and humanitarian assistance in response to natural disasters in the region are essential components of regional cooperation, particularly with respect to Melanesian countries.

This well-documented commitment to the Pacific should be the context in which the United States frames its regional coordination and stronger ties with Fiji. The United States has long valued Fiji's role in United Nations peacekeeping operations (PKO). Because U.S. law requires the freezing of military assistance to any country whose democratically elected government is overthrown by a military, Fiji’s 2006 coup significantly reduced Washington’s ability to conduct normal ties. These sanctions were not Fiji-specific but global legislation mandated by Congress; however, bilateral relations were tested—more by mutual misunderstanding than intent.

The United States should look closely at the regional security needs of the Pacific beyond those of protecting local populations and promoting stability in a largely-democratic and peaceful environment.

The United States should look closely at the regional security needs of the Pacific beyond those of protecting local populations and promoting stability in a largely-democratic and peaceful environment. It should work with Suva to assess the capabilities and determine the future roles and responsibilities of Fiji's military, law enforcement, and civil society in conducting international peacekeeping and humanitarian assistance/disaster relief operations.

Fiji's current and traditional missions would be advanced through strategic engagement with the United States, partner countries, international organizations, and non-governmental organizations.  Future PKOs will likely consist of deployments against non-state actors. Such deployments also would have robust rules of engagement that are often characterized as "peacemaking," as opposed to simply "peacekeeping." In many instances these operations may be coalition efforts not necessarily under UN command.

Due to complex and uncertain global challenges, Fiji may expect to fulfill additional missions beyond traditional PKOs. These new security operations are likely to be non-conflict in nature such as civilian protection, law enforcement, humanitarian assistance/disaster relief, and pandemic control. At the same time, reintegration on security issues would foster closer cooperation with regional partners Australia, New Zealand, and France.

Successfully playing a key supporting or even lead role in these mission sets in any part of the world is complicated, difficult, and full of risks. Suva will need to demonstrate greater finesse in its dealings with other capitals and with non-military players such as intergovernmental organizations, international financial institutions, local NGOs, and the private sector.

In an environment where the probability of increased requirements for direct and indirect support in response to international crises remains high, Washington and Suva should discuss increasing traditional capabilities through additional resources, programs, and training.

Fiji may also experience new challenges ranging from refugee protection and civil affairs to humanitarian and crisis operations. Its deployable personnel must be trained and adapted to meet these new challenges.

Additionally, at some point Fiji likely will be called upon to deploy personnel and assets within the Pacific or to Asia, Africa, or the Middle East. Most of Fiji’s neighbors simply cannot match Fiji’s organizational and material assets, resources, reach, and potential for greater capacity.

In an environment where the probability of increased requirements for direct and indirect support in response to international crises remains high, Washington and Suva should discuss increasing traditional capabilities through additional resources, programs, and training. These activities would lead to additional roles in areas such as disaster relief, humanitarian crises, pandemic containment, and other non-traditional military operations.

This would bring to the table tools that can be used directly by Fiji’s military, law enforcement, and other governmental agencies to enhance domestic and regional security. Moreover, broadening Fiji's capabilities to address humanitarian assistance and disaster response will bolster capacity in the civilian sector. Such future deployments would need to incorporate inclusion as well as protection of women and vulnerable populations to meet the requirements of UNSCR 1325. Equally as important, Fiji would be a more viable partner, particularly as the United States engages with traditional allies in helping to shape regional priorities.

This article was originally published in the Asia Pacific Bulletin of the East-West Center.