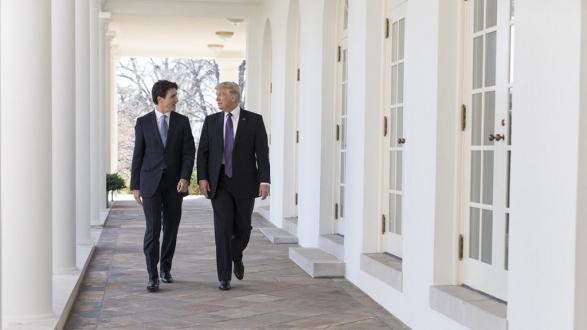 Even before the NATO Summit was convened in Brussels for July 11-12, there were fears that Trump would serve as a disrupter, with headlines reading, "How Trump could blow up the NATO summit," and "The huge panic about the Trump-Putin summit is great for Russia."

Those fears proved founded and prescient, as NATO diplomats reacted to Trump’s statements as "beyond belief."

While NATO worries about its existence, one unfortunate aspect of the angst of Trump’s comments is that they have diverted attention from pressing issues which should have deserved particular focus during the meeting: the organization’s southern flank, dealing with Iraq, and Canada’s announcement that it will lead the NATO training mission in Iraq to consolidate the victory against ISIL.

The Trump Factor and NATO

Among Trump’s rants during the summit was a demand that member spending not only meet the 2 percent of GDP spending scheduled for 2024, but that this spending must ultimately go to 4 percent.

While media attention has focused on how this demand will impact countries that have not met the 2 percent threshold, such as Germany, Spain, and Belgium, the 4 percent demand would also serve as Trump dictating how much of Turkey’s economy be devoted to military spending.

Trump’s ire was particularly directed towards Germany and its North Stream pipeline to Russia, tweeting, "What good is NATO if Germany is paying Russia billions of dollars for gas and energy?"

Trump's rhetoric raised questions as to whether the members can trust the United States to honor Article 5 of the collective defense treaty—which is what enshrines the spirit of "solidarity" within the alliance.

Finally, his rhetoric raised questions as to whether the members can trust the United States to honor Article 5 of the collective defense treaty—which is what enshrines the spirit of "solidarity" within the alliance.

The summit focused on the durability of the trans-Atlantic connections, particularly between the United States and Germany, and the future of security in central and eastern Europe, domains that can be challenged by Russia.

From Turkey’s perspective, the tirades that ensued during the summit should be disturbing, as it led to the neglect of NATO’s interests in the Black Sea and the Mediterranean, two bodies of water that are of particular concern to Ankara.

In regards to the Black Sea, Trump’s comments led to emergency meetings during the summit that disrupted a scheduled discussion on Ukraine and Georgia. Trump’s twittering resulted in him arriving late on July 12 at NATO headquarters for meetings that included talks with the leaders of Azerbaijan, Romania, Ukraine, and Georgia.

Second, the NATO summit revealed how the organization perceives relations and threats on national terms, whether it be maintaining bilateral relations between the United States and Germany or countering the threat of Russia to member states such as Estonia, Latvia, and Lithuania.

The challenge for Canada is not only to inculcate a professional fighting ethos within the Iraqi military, but to create a military that can tackle the challenges posed by the non-state actors that operate in Iraq.

However, on NATO’s southern flank, security issues do not involve nation-state but violent non-state actors and terrorist groups. When considering NATO’s borders, it’s often forgotten that Turkey, as a member of the organization, has to deal most with the chaos in Iraq and Syria.

In February, NATO announced that it will begin planning for a new training mission in Iraq, which was requested by the Iraqi government. Canada’s announcement of assuming this mission means that it will assume the daunting task of security sector reform (SSR) of Iraq’s myriad of military forces. This task has implications for the greater region, including the Mediterranean and Turkey.

First, the armed Shia militias that proliferated in Iraq after 2003 and increased in number after the ISIL invasion of 2014 not only operate in Iraq but in Syria, and share organizational linkages with Hezbollah in Lebanon. Second, the Syrian-Kurdish People’s Protection Units (YPG), the Syrian branch of the PKK, also operate in Iraq.

Third, and finally, the demobilization of the Baathist-era military after 2003 led to unemployed and unmoored officers to gravitate towards ISIL, a group whose fortunes turned around as a result of the Syrian civil war as of 2011, which then enabled them to aid in the conquest of Mosul in 2014. Finally, every single one of these actors operates in Syria, a state that borders the Mediterranean and along the Turkish border.

While Trump may have come out of the NATO summit as a destabilizer, Trudeau offered an example of North American commitment to both European and Middle Eastern security.

In terms of SSR, two NATO members, the United States and Turkey, have had experiences with Iraq’s armed forces. The American military training presence in Iraq became more robust after the ISIL invasion, and Washington will most likely use this leverage to pressure Iraq’s leader to distance themselves from Iranian influence. However, for a sustainable SSR strategy, regional players such as Iran and NATO’s Turkey will also need to be part of the process.

While America’s commitment to the Middle East and NATO remains in question, Canada’s agreement to assume this mantle portends well for implementing SSR in Iraq. Ultimately, while Trump may have come out of the NATO summit as a destabilizer, Trudeau offered an example of North American commitment to both European and Middle Eastern security.