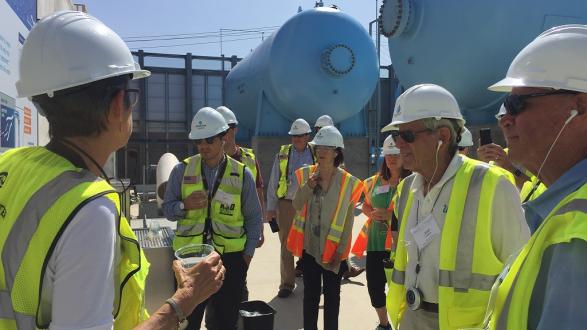 This trip was part of the Council’s Global Water Scarcity Project, which connects California’s water scarcity needs with international affairs. As the state recovers from the latest drought, we aim to expand our understanding of how other countries and regions are meeting their water security needs and ultimately champion approaches that can help us secure an abundant water future.

As a primer for learning about water scarcity and its influence on national, human, and economic security, our July site visits provided a visual answer to the questions: Where does my water come from? And where does it go?

Desalination is often cited as a way to drought-proof an economy. It is widely used in the Gulf States, and Israel’s use of three desalination plants on its coast is credited for securing water during a 900-year drought. Still, even in Israel, desalination should be part of a wider strategy of conservation and efficiency, not a panacea. In Australia, widespread investment in desalination during a drought of record resulted in less-than-optimal results, in part due to the use of take-or-pay contracts, followed by the untimely return of the rains just as many plants were becoming operational. Desalination is also controversial among social and environmental groups, who oppose it for environmental as well as social equity reasons. Israel’s experience with desalination has also started to raise questions about effects on human and ecosystem health.

Desalination is often cited as a way to drought-proof an economy, but desalination should be part of a wider strategy of conservation and efficiency, not a panacea.

The Carlsbad Desalination Plant is co-located with a power plant that is in the process of being decommissioned. It took advantage of existing infrastructure, including a man-made lagoon for water intake (used by the power plant for cooling) and industrial zoning. Delegates viewed all stages of the desalination process, including the screening of the water at intake to remove salty sludge, which is then transported regularly to a landfill. San Diego’s existing water distribution systems receive the desalinated water—which represents about 10 percent of the city’s water supply—through pipelines from the facility.

After the desalination plant tour, the delegation visited the Encina Pollution Control Facility, located a few miles down the road, to see what happens at the other end of the drain. Wastewater represents billions of gallons of freshwater used for indoor household use—the Encina Facility alone treats 22 million gallons per day. In some areas, wastewater treatment plants also treat stormwater through what are known as Combined Sewer Networks. As an approach to waste management, large-scale sewage and treatment networks dramatically improved public health in the 20th century, with its perceptions of freshwater abundance and unlimited capacity of oceans to dilute waste. Now, in the 21st century, the argument for using freshwater to flush toilets in water scarce areas is less sound. Around the world, alternatives to waterborne sewerage are emerging, including high-tech solutions, as well as admittedly low-tech ones.

Here, too, the delegation observed the different stages of wastewater treatment, from initial screening and sludge dewatering through to the clarification tanks that treat the water to safe levels for discharge into the ocean, or for use in irrigation and industrial cooling. Encina is an interesting plant: built originally in the 1960s, layers of technology improvements have been added over time, for example in the production of bio-solids from sludge and energy recovery facilities to drive its operations.

Globally, water scarcity is increasingly recognized as a threat for society and for markets. California is at the forefront of innovation to address water scarcity, through innovation with new technologies as well as management practices for both urban and agricultural water use.

As the Pacific Council’s Global Water Scarcity Project Fellow, part of my job was to bridge what participants saw on the tour with water scarcity challenges and innovation around the world. Globally, water scarcity is increasingly recognized as a threat for society and for markets. California is at the forefront of innovation to address water scarcity, through new technologies as well as management practices for both urban and agricultural water use and strengthened underlying water management through the Sustainable Groundwater Management Act. California is also a global leader on conservation and watershed restoration, as the challenges of water scarcity are multi-dimensional and therefore require multi-dimensional solutions.

Southern California offers many opportunities for learning about and engaging with water policy at local and state levels, as a primer for deeper work connecting California’s water needs with international trade. How much water gets exported through agricultural crops? Which California companies are global innovators in water efficiency and reuse, throughout their supply chains? And how does California’s water scarcity relate to Mexico, and to what’s happening in Washington, D.C.?

Pacific Council programming will follow these and a variety of other topics in the weeks and months ahead. We hope you will join us to learn more about how water security connects with trade and security, both national and human.
_______________________

Learn more about the Pacific Council's Global Water Scarcity Project, and contact mwebb@pacificcouncil.org to learn how you can get involved.