Should U.S. Step Back from the World? Most Members Say No 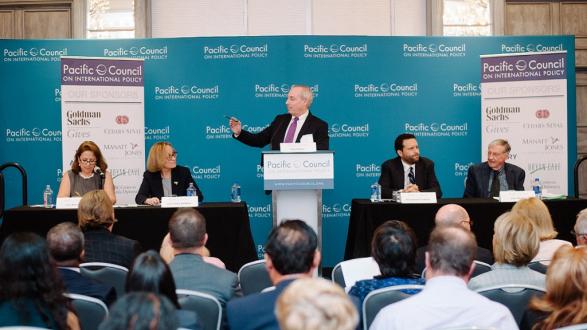 The U.S. public has long been wary of international engagement: roughly six in 10 believe the country should focus on solving its own problems and let other countries deal with theirs. Still, the next administration will have a smorgasbord of complex international issues on their plate when they take office in January 2017. From the ongoing war in Syria to growing tensions in the South China Sea and the reality of a nuclear North Korea to an increasingly aggressive Russia, the next administration will be tasked with developing and implementing a plan for the country’s future global engagement.

Panelists of the penultimate plenary debate session of Members Weekend 2016 sought to answer the question, "Should the United States take a step back from the world?" The debate was moderated by Mr. Dan Schnur, director of the Jesse M. Unruh Institute of Politics at the University of Southern California.

Mr. Benjamin H. Friedman, research fellow on defense and homeland security issues at the Cato Institute, and Mr. John Mueller, the Ralph D. Mershon senior research scientist and Woody Hayes chair of national security studies emeritus at Ohio State University, argued that the United States should take a step back from the world.

Dr. Lori Esposito Murray, adjunct senior fellow at the Council on Foreign Relations, and Dr. Carla Robbins, clinical professor of national security studies and faculty director of the MIA Program at the Baruch College CUNY Marxe School of Public and International Affairs, argued that the United States should not take a step back from the world.

"Taking a step back from the world does not mean isolation from it. It means military restraint."

Friedman opened the debate by arguing that taking a step back from the world means fighting fewer wars and having fewer allies.

"Taking a step back from the world does not mean isolation from it," said Friedman. "It doesn’t mean protectionism, nativism, and it definitely doesn’t mean Trumpism. Nor does it mean abandoning U.S. power or entail a U.S. foreign policy that’s devoid of moral responsibility. It means military restraint. It means a more humble and peaceful foreign policy that dispenses with the myth that U.S. military forces are the key to the world’s stability and liberalization."

"The answer is clearly ‘no,’ the United States should not take a step back," said Murray. "Withdrawal is not an option. Our leadership role in the 20th century has led to greater security and unprecedented prosperity and growth. Even if we wanted to take a step back, we couldn’t. With the collapse of the Soviet Union and the information technology revolution that we led, the world has changed so rapidly in the past 20 years. We have rapidly globalized trade, commerce, markets, labor, and perhaps most importantly, information. Rolling this back is impossible. U.S. leadership is absolutely necessary to ensure that the rules are open, free, fair, and respected."

"The United States has not been a force for global security or stability but quite the reverse."

Mueller said that the United States has a lot to be humble about over the last 15 years in terms of its international engagement.

"The United States has not been a force for global security or stability but quite the reverse," said Mueller. "I don’t think it’s the role of the United States to walk into a country and say, ‘We do it this way and so should you.’ Look at the Middle East. The United States gives Pakistan $1-2 billion in aid and yet 74 percent of Pakistanis consider the United States to be an enemy. The destabilization in Afghanistan is very obvious, of course. In Iraq, the United States’ $4-5 trillion war has brought total chaos to that country and the region and has been an abject failure. And there’s destabilization in Yemen, Libya, and Syria. Stepping back from the world would not be stepping back into oblivion, but rather from overextension and from using military force to carry out goals."

Robbins agreed with Mueller’s warning about overextending the military, but disagreed with the cause of instability in the world.

"I agree we shouldn’t fight dumb, immoral wars," she said. "We certainly haven’t argued for the Iraq War. But I do not accept the premise that our alliances, values, and presence in the world are the cause of dumb wars, instability, or bad actions by bad actors. Quite the opposite. If we retreat it would send precisely the wrong message."

"U.S. leadership is absolutely necessary to ensure that the rules are open, free, fair, and respected."

Mueller made the case that if the United States hadn’t existed, Europe would have developed "pretty much the same way" after World War II as an example of why the United States can and should take a step back from the world.

"I just want to remind everyone of the Marshall Plan and of all the money that we put into Japan, South Korea, Germany, and Europe after the war," replied Murray. "You can’t separate what the U.S. has done in terms of military policy leadership as well as economic policy leadership. They are inextricably linked."

Robbins argued that without U.S. leadership, the world would be a disaster.

"U.S. engagement abroad is not binary," said Robbins. "The issue isn’t whether to engage or not to engage, it is to do it in a skeptical and critical way, to be cognizant of the cost, to have a realistic definition of success, and to have confidence in our own moral strength."

"The issue isn’t whether to engage or not to engage, it is to do it in a skeptical and critical way, to be cognizant of the cost, to have a realistic definition of success, and to have confidence in our own moral strength."

Friedman argued that taking a step back from the world specifically means limiting the military’s engagement around the world.

"We should take a step back from the world not by disassociating with it, but by stopping this effort to try to run it with the U.S. military," he said. "If that view seems radical, it’s because decades of efforts to justify our foreign presence around the world have dramatically shifted our sense of normalicy [sic] to the point that a foreign policy that sees no limit to our interests or powers has become kind of a bipartisan religion, at least in Washington."

Members Weekend highlights the work and expertise of the Pacific Council community of members and partners. Take a closer look at this year’s event, and read all Members Weekend analysis now in our Newsroom.