Saudi Arabia and Iran are Adapting to Perpetual Conflict 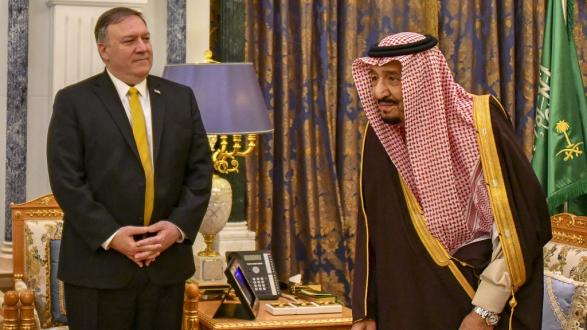 When rogue intelligence officers at the Saudi consulate in Istanbul killed journalist Jamal Khashoggi in October 2018, an official of Iran’s Islamic Revolutionary Guards Corps (IRGC) voiced concern over the surge of US media onslaught on Saudi Arabia. Echoing Iran’s conspiratorial views of the United States, the IRGC official questioned if Washington was planning to undermine Riyadh. He then insisted that Tehran would denounce such moves.

Iran is charged with interfering in Saudi Arabia’s internal affairs, but Tehran appears to want Riyadh to keep a firm hold on power. The rapid deterioration of regional security has muted Iran’s desire to watch rival Arab states collapse. There is a realization that the potential rise of jihadists in Saudi Arabia, if the kingdom were to fall, could also destabilize Iran. In a similar vein, in Riyadh—per conversations this author has had—there is concern that the kingdom would have to pay a heavy price if a war erupted with Iran.

As permanent neighbors, Saudi Arabia and Iran recognize they must live together in good or bad times. Even in the worst of times, thousands of Iranian pilgrims have continued to travel to Saudi Arabia each year, and Saudi Shias have traveled to Iran.

Restraint in the face of tensions is Saudi Arabia and Iran’s preferred modus vivendi when crises around them erupt.

Tehran and Riyadh would rather not throw caution to the wind when dealing with each other. Restraint in the face of tensions is Saudi Arabia and Iran’s preferred modus vivendi when crises around them erupt. This was obvious when Tehran was accused of recent attacks on four oil vessels including two Saudi tankers off the coast of the United Arab Emirates on May 13, followed by a Yemen Houthi rebel-led drone attack on a Saudi oil pipeline.

Tehran blamed the attacks on third parties trying to take advantage of ongoing regional upheavals. IRGC-affiliated Tasnim News Agency said that rival factional fighting in Yemen could have triggered the attacks. The Houthi-run Masirah television claimed responsibility for the drone attack, but the Houthis insisted that Tehran was not behind it.

Riyadh refrained from issuing an official statement that directly placed the blame for the attacks on Iran, though it did mention the perpetrators of the pipeline attack were backed by Tehran.

However, the Saudi Deputy Defense Minister Prince Khaled bin Salman and Minister of State for Foreign Affairs Adel al-Jubeir said on Twitter that the attacks were acts of Iranian provocation. An article in the Saudi daily, Arab News, opined that retaliatory action against Iran was needed. But the paper’s editor argued that Iran should call President Donald Trump to resolve tensions between the US and Iran before an escalation is triggered in the region.

Riyadh and Tehran have so far dismissed going to war, although the kingdom has approved a U.S. request to deploy troops to the Persian Gulf.

The latest attacks came after the Trump administration’s decisions to force zero oil exports on Iran by tightening unilateral sanctions against the country, and Saudi Arabia’s assurance of adequate oil supplies to keep global prices steady.

Riyadh and Tehran have so far dismissed going to war, although the kingdom has approved a U.S. request to deploy troops to the Persian Gulf. Iran warnedthat the region’s security is at risk if it feels cornered by the United States and its regional Arab allies. Policy analysts in Tehran are lashing out at Riyadh for potentially harboring regional hegemonic ambitions aiming to contain Iran.

Saudi Arabia is not historically a hegemonic power, but its latest actions in response to Iranian regional provocations suggest that the kingdom wants to make sure that Tehran’s own hegemonic goals, which it strongly denies having, are kept under control.

Striving in adversity is what Saudi Arabia and Iran seem to be doing best. But it comes at a cost. Riyadh and Tehran are weaker, not stronger because they spend much of their funds on defense rather than growth and development.

Launched in 2017, TFTC is a multilateral effort led by the United States and Gulf Cooperation Council countries. Since April 10, Saudi Arabia and the United States have led a series of discussions on Iran. President Trump has also backed the idea of a Saudi-led Arab NATO to help contain Iran’s regional influence. In April, Riyadh convened a preliminary meeting to form the new body.

Tehran-based policy analysts insist that Saudi Arabia will not be able to confront Iran even with the Trump administration’s support. A unipolar Gulf agenda focused on Saudi capabilities instead could place the kingdom between a rock and a hard place. The kingdom might have to defend itself against Iran while waiting to see what the next U.S. move on Tehran is, which could be engagement or conflict at any given point in time. The latest surge of U.S. forces in the Persian Gulf could risk engaging Saudi Arabia and Iran in a perpetual fear of conflict, or drag Riyadh into a war with Tehran that it does not want.

Striving in adversity is what Saudi Arabia and Iran seem to be doing best. But it comes at a cost. Riyadh and Tehran are weaker, not stronger because they spend much of their funds on defense rather than growth and development. Tehran is not closed to the idea of finding a way out of the current impasse, but it is not sure if it can trust the Trump administration to keep the peace and encourage Saudi Arabia to work with Iran.

Saudi Arabia has not responded well to Iranian calls for engagement. It cannot trust Iran’s intentions, nor has the Trump administration been able to provide a clear Iran policy.

Tehran has tried to de-escalate tensions with Riyadh by insisting that it does not seek rivalry but multilateral regional cooperation. Saudi Arabia has not responded well to Iranian calls for engagement. It cannot trust Iran’s intentions, nor has the Trump administration been able to provide a clear Iran policy. As a result, the kingdom has increased engagement with regional countries where Iran has held considerable influence, to control Tehran’s growing power and encourage a change of behavior.

Still, Iraqi leaders have traveled to Saudi Arabia and Iran to build regional peace in April, and even sponsored an inter-parliamentary meeting in which both parties took part. Saudi Arabia’s Gulf allies have also re-opened their embassies in Syria where Tehran ignored their previous calls for the ouster of Iran-backed President Bashar al-Assad. Other opportunities may arise, including Damascus returning to the Arab League after leaving the body when the Syrian civil war broke out.

Similarly, in Yemen, there is a chance for conflict resolution. Saudi Arabia and Iran have worked with former president Ali Abdullah Saleh, who was known to have little regard for sectarian loyalties. Though Saleh worked with the Iranian-backed Houthis, he was close to Saudi Arabia when the kingdom helped with a power transition in 2011.

While the two countries may have shown encouraging signs to contain conflicts, Saudi Arabia insists that Iran needs to change its behavior instead of trying to expand its regional influence.

A multilateral regional cooperation arrangement between Saudi Arabia and Iran is a goal both have occasionally wanted. But the goal cannot be realized because the US is not fully on board with the idea, and is unwilling to take on the hard task of helping restore the balance of power between Saudi Arabia and Iran where conflicts persist in the region.

While the two countries may have shown encouraging signs to contain conflicts, Saudi Arabia insists that Iran needs to change its behavior instead of trying to expand its regional influence. Perpetual dueling interests between Saudi Arabia and Iran have not just weakened them regionally, it has also forced the two to barely survive as neighbors.

Banafsheh Keynoush is a Pacific Council member and president of Mideast Analysts.

This article was originally published by the Atlantic Council.