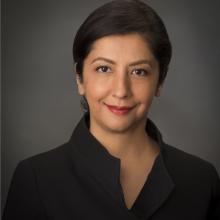 Banafsheh Keynoush is a foreign affairs scholar and an advisor to American private sector companies and policy centers in the Middle East. She has three decades of work experience in high-stake international diplomacy, and in policy and communications roles with the US private sector. She has worked as a development officer at the World Bank and the Asia Foundation. In 2016, she was selected as a Prominent Fletcher Woman by Tufts University.

Dr. Keynoush is a frequent speaker in international forums, a political commentator who appears on television and radio, and the author of numerous articles and scholarly publications. In 2011, she was a visiting fellow at the King Faisal Center for Islamic Studies and Research, Saudi Arabia. Her book, Saudi Arabia and Iran: Friends or Foes? was published by Palgrave Macmillan in February 2016.

For over two decades, Dr. Keynoush worked as a chief simultaneous interpreter with the European Commission, the U.S.-Iran Claims Tribunal, four of Iran’s presidents and nobel laureate, hundreds of international events, conferences, dual track diplomatic meetings, and with the United Nations. She received her master’s degree and PhD in International Law and Diplomacy at Tufts University, USA.