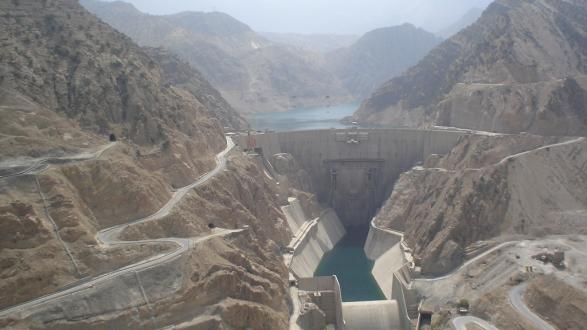 Iran could be drawn into a major water dispute with Iraq. Water scarcity has triggered significant socio-political and security problems in Iran. Iraq blames Iran for changing the course of rivers that flow into the Tigris and Euphrates, as well as building dams in contravention to international law. Iran thinks the problem can be fixed through proactive “water diplomacy” with Iraq but admits that such a policy is lacking.

The relationship between Iran and Iraq has hit a hard rock given the water crisis between the two. Iran itself is experiencing a major water crisis that surfaced in 2011. The crisis could lead to a major water shortage in the country by 2036. Iran has turned a blind eye to the problem, looking for lucrative quick fixes such as hefty dams and water transfer projects. Despite the socio-economic consequences of such large-scale projects, Iran’s parliament has repeatedly failed to thwart water transfer and dam construction plans for the next five years.

Iran’s water policies have worsened the problems along its western borders with Iraq. Some two-thirds of Iran’s total 10.2 billion cubic meters of water exiting the country goes to Iraq. Experts predict that Iran’s western provinces will lose their water reserves at some point because of rapid flows into Iraq. This means that Iran’s government will have to aggressively develop water policies that permit it to fully use the country’s existing water resources.

Iran’s government will have to aggressively develop water policies that permit it to fully use the country’s existing water resources.

This year alone, Iran will construct 13 new dams. In the last three decades, it has built more than 600 dams. It has developed other large-scale water transfer projects which have deprived the western provinces that border Iraq of much needed water and instead transported it to the central and eastern provinces in Iran.

Several Iranian provinces have already depleted their water reserves. This has placed the western provinces of Iran in more critical water shortage conditions than the rest of the country. In fact, in many remote urban areas in the west of Iran there has been a gradual shift from surface to ground water supplies for drinking purposes. Without an operative national waste management system, there is more polluted water in the remote areas, though less so in major urban areas where water quality standards are higher.

To make matters worse, Iran’s government has turned to extracting water from the once mighty Karoun river which flows from the mountains of Zagros to Khuzestan.

Farmers are increasingly antagonistic to neighboring farmers, a problem that has further exacerbated existing water tensions along Iran’s borders with Iraq.

The water transfers have led to problems in Khuzestan, as farmers there are unwilling to accept limits on growing rice that is a water intensive crop and results in water salinization. As more water is transferred from both Karoun and Zayandeh Rud to the eastern provinces, farmers in Iran’s central valley are increasingly antagonistic to farmers in neighboring Khuzestan, a problem that has further exacerbated existing water tensions along Iran’s borders with Iraq.

Despite these challenges, Behrooz Moradi, a member of Iran’s National Company for Expansion of Water and Power Resources claims that there is no comprehensive water management plan in Iran. AbdolHamid Khadri, a member of Iran’s parliament, warns that Iran could see the eruption of wars because of water scarcity and face near collapse as a result. The worst hit areas are the southern villages and towns bordering Iraq, including Bushehr, Dashestan, Abadan, and Minou Island. Reza Ardakanian, Iran’s Minister of Energy, says that rainfall is a third lower than its average levels this year in these areas, and temperatures have increased by almost 2 degrees centigrade. This threatens these areas with severe drought.

There is no clear solution on how to manage Iran’s water crisis along the borders with Iraq. If the problem is not fixed, it could potentially turn into a major security threat for Iran. Rather than face the problem, Iran generally prefers to deal with water disputes with Iraq as an internal rather than a regional issue. In fact, there is no major or comprehensive agreement between Iran and Iraq on the management of their shared rivers.

Iran suffers from chronic water shortages, and border waters could be a good resource for the country. But because of a lack of applicable laws, Iran underuses the potential of its vast border waters.

Iran’s National Committee for Sustainable Development, a body that aims to advance the UN 2030 goals for development, holds state managers responsible for decisions about water distribution policies, internally and externally. Iran’s Fifth National Development Plan (2010-2015) makes it imperative to prevent the flow of water across Iran to its neighboring countries and instructs that water should be re-diverted into Iran. Surface border waters are managed directly through joint agreements with neighboring states, often allowing a 50-50 share for using such waters.

More importantly, because of a lack of applicable laws, Iran underuses the potential of its vast border waters. Some 22 percent of Iran’s water resources run along 1918 kilometers of its borders through 26 small and large rivers. Though Iran works with Afghanistan to build water agreements over Helmand, it lacks multilateral diplomacy to address similar issues with Iraq.

Iran’s water foreign policy is clearly waning for now, and the country’s “water mafia” is criticized for using this natural resource for political influence in Iraq.

Iran’s water foreign policy is clearly waning for now, and the country’s “water mafia” is criticized for using this natural resource for political influence in Iraq and for profiting in lucrative transactions. Meanwhile, frequent sandstorms from Iraq keep polluting half of Iran. The Foreign Ministry treats the sandstorms as a national crisis equal to the threat from terrorism. Many in Iran believe the Ministry has hardly done enough.

The Organization for Environmental Protection has similarly done little and has largely operated as a sounding board for environmental grievances without offering any solutions. Also, other state institutions have been reluctant to accept accountability for Iran’s water disputes with Iraq. Under Saddam Hussein, water was diverted from many parts of southern Iraq and from the upstream areas of the Euphrates and Tigris, simply to satisfy the Iraqi dictator’s thirst for prestige in his hometown regions of Iraq and to control the population in the South.

As a result, he destroyed much of Iraq’s natural habitat and his country became a fertile ground for IS recruits decades later. Experts say they fear Iran could face a similar problem as it has done nothing to stand up to Turkey or to fix problems with Iraq except for building dams and pocketing money from the construction.

Though there seems to be no quick fixes to Iran’s water problems, the fact is that the country is still endowed with major water resources along its western borders with Iraq.

As Iran faces its lowest rainfall levels three years in a row and a severe drought, its future is not promising. Some 338 out of 699 valleys in Iran are in critical or banned areas for water consumption, and a total of 334 towns and cities are currently faced with a water crisis. Around the Gulf, the government claims conditions of water supply are near back to normal and water consumption has lowered. But with a 41 percent drop in rainfall combined with population density, water supply prospects remain critical.

By all accounts, Iran’s agricultural sector is doing decently well, and does not need to expand but improve. This means that Iran has the opportunity, if not the will, to address its water scarcity issues with Iraq. In this respect, there are a number of practical steps that Iran could take:

Banafsheh Keynoush is a Pacific Council member and president of Mideast Analysts.

This report was originally published by Rasanah.