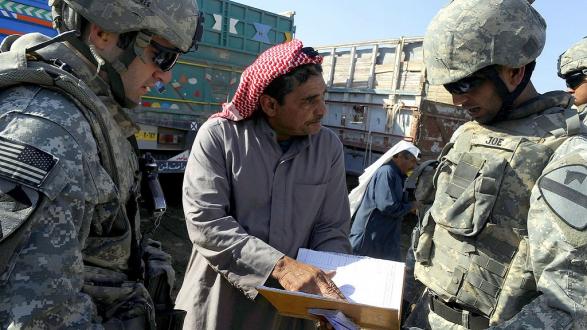 Enemies of the United States continue to undermine efforts in conflict zones by targeting U.S. soft networks (local allies such as interpreters, contractors, or indigenous parties that directly support the U.S. military or other U.S. agency efforts). Military leaders and diplomats have few policy tools at their disposal to insulate those networks, and many times, do not anticipate the attacks until their closest partners quit, flee, or are found dead. Given the likelihood that enemies will continue to pursue a strategy to target soft networks, the State and Defense departments in particular should have doctrinal and policy options to proactively insulate critical partners abroad. Failure to develop such tools threatens the American reputation abroad and could degrade the establishment of future soft networks.

Historically, opponents fighting from a position of weakness, including America’s founding fathers, have employed strategies to target loyalist forces. Since the initial invasions of Afghanistan and Iraq this strategy has appeared routinely against the United States. Enemy organizations like ISIL, the Taliban, various al Qaeda franchises, Shi’ite militias, and other forces have effectively waged a campaign to threaten, coerce, and kill U.S. indigenous partners in those conflict zones. While these two theaters provide the most egregious and prominent examples of the strategy of targeting soft networks, the principles apply in every area where U.S. forces and diplomats attempt to wield influence.

The State and Defense departments should have doctrinal and policy options to proactively insulate critical partners abroad.

The Strategic Landpower Task Force in 2013 jointly hosted by Generals Raymond Odierno and James Amos and Admiral William McRaven acknowledged that the competition of wills and the land force’s ability to win that competition would continue to define future conflicts. Understanding the human domain and attempting to dominate the contest would require the Army, Marine Corps, and Special Operations Forces to develop the doctrinal concepts and have the strategic policy tools in place to enable success.

Interestingly, other departments and agencies in government require the same tools that the land forces identified as lacking. A strategic framework to protect soft networks would span the operational spectrum and would not simply be limited to counterinsurgency or counterterrorism efforts. All diplomatic and military operations in the contemporary environment demand effective local partnerships with both civilian and military elements.

While current military doctrine acknowledges the importance of soft network partners like interpreters and other local national allies, no doctrine delineates how to effectively insulate those networks. Further, the only policy the United States enacted as a result of thousands of interpreters and other partners fleeing their homes was the Special Immigrant VISA (SIV) in 2007, which provided for former interpreters from Iraq and Afghanistan to immigrate to the United States after rigorous screening. While the SIV serves as an important policy, it should complement other tools and be implemented as an option of last resort in most cases.

Policy and doctrinal solutions that proactively protect the identities of local national allies would greatly facilitate achieving national security interests. However, these policy options do not exist, and the practitioners do not yet have the doctrinal solutions and standards to train, prepare, and execute proactive insulation of their soft networks. The lack of policy options creates a strategic vulnerability that U.S. adversaries readily exploit.

If the United States, a country that enjoys a healthy and relatively strong rule of law, requires witness protection, then our diplomatic and military officers operating in conflict zones should have similar tools at their disposal.

All is not lost, however. The U.S. government need not look far to identify best practices in other fields. For example, media companies habitually employ local nationals, called "stringers" in journalist parlance, to collect news around the globe. NGOs employ indigenous partners in difficult countries like Somalia. Even in the United States, the U.S. Marshals operate witness security programs, usually referred to as witness protection, to protect potential witnesses against gangs, mafia, and other nefarious networks. Most states have enacted their own witness security programs to complement the federal government’s efforts. If the United States, a country that enjoys a healthy and relatively strong rule of law, requires witness protection, then our diplomatic and military officers operating in conflict zones should have similar tools at their disposal.

Best practices that the media, NGOs, and others utilize abroad involve two principles: 1) protecting identity, and 2) temporal relocation when that fails. These organizations use degrees of separation and cloaking methods to protect the identities of local national partners that enable those agents to operate in plain sight of potential antagonists. Many of the techniques resemble some of the programs that states enact to protect battered women from continued abuse. False addresses, telephone numbers, and aliases complement the routines that local nationals use to conduct activities on behalf of western media and NGOs. The intelligence community practices many similar techniques to protect undercover agents.

With more and better policy and doctrinal solutions, the military and diplomatic corps will be better equipped to insulate their soft networks and counter a logical enemy strategy.

Diplomatic and military practitioners may not always be able to employ the same techniques as the intelligence community or the media. Many times diplomats and their local national colleagues must be seen functioning together in public to engender trust for political initiatives. The military suffers from economies of scale challenges as it employs tens of thousands of local contractors in conflict zones. However, the Defense and State departments should proactively consider identity protection methods and not be surprised when adversaries target their soft networks. They should have other policy options besides the SIV, which is often too little, too late, and many times not appropriate at all for certain local partners.

With more and better policy and doctrinal solutions, the military and diplomatic corps will be better equipped to insulate their soft networks and counter a logical enemy strategy. It is a strategic imperative to provide more policy options to protect soft networks in the field – proactively rather than reactively.

Enemies will naturally target interpreters and other local nationals who work with U.S. diplomats and military personnel. Fortunately, there are tested methods that would improve the status quo. U.S. legitimacy suffers when soft networks are strategically weakened by adversaries. Through proactive policy and doctrinal development, the Defense and State departments can ultimately imbue strategic resilience into their indigenous networks to help cement foreign policy gains in conflict, post-conflict, and developing areas.
____________________

Steve Miska is a national security consultant for the Global Peace Foundation. He recently retired from the military after 25 years of service. Previously, he served at the White House as Director for Iraq on the National Security Council. Read more about his background and follow him @SteveMiska.