Roth: U.S. Should Promise Not to Invade North Korea 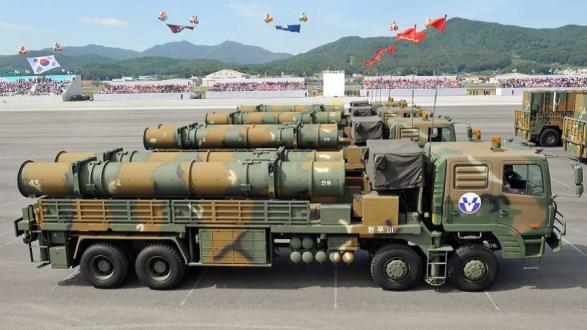 Two weeks before North Korean leader Kim Jong-un made the same offer, Stanley Roth told Pacific Council members in a teleconference that the United States should promise not to invade North Korea as a bargaining chip to get the country to abandon its nuclear weapons. Roth is the former Assistant Secretary in the State Department’s Bureau of East Asian and Pacific Affairs. The discussion was moderated by Ms. Jean H. Lee, director of the Hyundai Motor-Korea Foundation Center for Korean History and Public Policy and global fellow at the North Korea Documentation Project in the Wilson Center’s Asia Program.

The teleconference took place the week before Kim made history by crossing the Demilitarized Zone into South Korea for a summit with South Korean President Moon Jae-in. The two leaders signed a pledge to "cease all hostile acts" amid a "new era of peace," and agreed to work toward a complete denuclearization of the peninsula and a formal end to the Korean War this year. Kim and President Trump are still working out the details of their highly anticipated meeting, expected to take place soon. Then-CIA Director and current Secretary of State Mike Pompeo met with Kim in person in early April.

"What will come out of the meeting between Trump and Kim? It’s unrealistic to expect some peace agreement to come out of this meeting," said Roth. "But will there be a joint statement? And will that statement be substantive or more consisting of platitudes?"

"From the U.S. perspective, what do we want to get out of this summit? Hopefully not a one-off: they have a meeting and take a picture. That won’t change anything."

As to why North Korea is seemingly finally coming around to negotiations, Roth said the sanctions on North Korea have had "considerable bite. Their economy is hurting, and it’s harder to hide what’s happening outside North Korea from its people. So the sanctions are probably a major incentive for them to talk to the United States, but not the only one."

Roth pointed out that the international community still does not know much about Kim.

"He just met his first world leader in March when he went to Beijing," he said. "This is a learning curve for him, too. From the U.S. perspective, what do we want to get out of this summit? Hopefully not a one-off: they have a meeting and take a picture. That won’t change anything."

Roth also pointed out that North Korea has said they’ll denuclearize before, so he urged observers to temper their expectations.

"The devil is in the details," he said. "What are their expectations? What does North Korea mean by denuclearization? The simplest definition of denuclearization is that the North gives up its nuclear weapons. It wouldn’t involve the United States doing anything. The problem with that premise is the North is unlikely to do so."

"The United States needs to make clear that it’s not going to attack North Korea and will respect its sovereignty."

Roth said that the United States also has to factor in the expectations of the other players in the region, namely Japan, South Korea, and China.

"China, South Korea, and Japan are probably pleased that talks between the United States and North Korea are starting up again, which they’ve advocated for years," he said. "But this has the potential to take off without them. Beijing is used to being in the driver seat."

He added that China is not comfortable in any way with the idea of North Korea having nuclear weapons, because it adds a whole new level of danger to the region. But he also doesn’t see China agreeing to security assurances such as stationing troops in North Korea.

"Instead, the United States needs to make clear that it’s not going to attack North Korea and will respect its sovereignty," said Roth.

Fittingly, two weeks after the teleconference, Kim said he was willing to get rid of his nuclear weapons if the United States promises not to invade North Korea.