The Role of Water in U.S.-Mexico Relations
Mexico 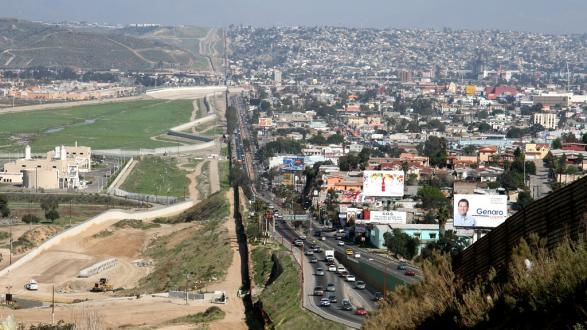 Water, at times, is translucent—drinking water in a glass, water in a swimming pool, rain on a window pane. Seen through the limpid waters in parts of the Caribbean, the sandy ocean floor and its exotic kelp and brilliantly colored fish, all several meters below, are clearly visible from the surface. Metaphorically, in the regions which occupy either side of the border between Mexico and the United States, the physical and political issues surrounding water form a strikingly clear lens through which to view the relationship, at both the governmental and interpersonal levels, between the two countries.

Remarkably, in fact, despite the provocations of the current U.S. administration toward its closest southern neighbor, international cooperation on water issues has been, in significant respects during the last two years, exemplary. At the same time and in stark contrast, water plays a central role in one of the worst humanitarian crises which afflict the border area. It’s complicated. And worth a deeper look.

The land and its water

Water for drinking, manufacturing, and agriculture comes from multiple sources along the nearly 2,000 miles of the U.S.-Mexico divide. Much of the water flows from the Colorado River, which in total supplies 5 trillion gallons of water each year to roughly 40 million people, most of it used for agricultural irrigation in both countries. But the great waterway is far from the only source of border area water. The Rio Grande and its tributaries contribute substantially to the water supply as do the many acre-feet of below ground aquifers on both sides of the political separation.

The region is largely semi-arid with extreme climate variability. There is higher precipitation at the coasts, but evaporation often exceeds precipitation, resulting in a soil moisture deficit. This area of the earth’s surface is particularly vulnerable to the impact of climate change and other stressors which contribute to a critical, looming threat of water shortages in the region.

Since the middle of the 19th century, three major successive water agreements have governed the shared usage of water along the border, starting with the Treaty of Guadalupe Hidalgo in 1848. A major revision to that compact modernized and improved cooperative water usage in 1944. Finally, at the end of 2017, the United States and Mexico signed a carefully negotiated new system of rules, expanding on a 2012 amendment to the 1944 agreement.

Under the new agreement, in vivid contrast to the posture of the United States regarding other Central America-related issues, the United States will fund $31.5 million of conservation initiatives within Mexico. These projects include relining presently leaking canals and irrigation ditches, needed improvements in the water pumping systems to use less water and the introduction of more advanced capture systems for runoff water with better reclamation and storage.

The saved water will then be divided between the two neighboring nations, with 260 million cubic feet dedicated for environmental projects. (For reference, a typical U.S. family uses about one acre-foot or 1,200 cubic meters per year.) Another $18 million of government and charitable foundation funding is earmarked for continuing environmental restoration, research, and monitoring. The treaty further grants to Mexico an additional 1.5 million acre-feet from the Colorado River’s annual flow of 14.8 million acre-feet.

There is general agreement among scientists who have examined this data that land/water use in the U.S.-Mexico border area has been following an unsustainable trajectory.

The principal organization involved in water management issues in the border area is the International Boundary Water Commission (IBWC), which has parallel controlling bureaucracies in the two countries. The U.S. commissioner appointed by President Obama, Edward Drusina, announced his retirement in May 2018, and the following fall the White House announced the appointment of Jayne Harkins, then director of the Colorado River Commission of Nevada, to replace Drusina. Harkins received bipartisan support. She is a hydraulic engineer by training, experienced and highly regarded—a welcome contrast with the majority of the more visible appointments of the current administration.

The IBWC carefully and exhaustively tracks water usage, water flow, and water supplies and publishes daily, public reports each morning on reservoir conditions and other water-related data. There is general agreement among scientists who have examined this data that land/water use in the U.S.-Mexico border area has been following an unsustainable trajectory. Contributing to this ominous situation are rapid urbanization, an arid and semi-arid climate, saltwater intrusion, irrigation expansions, lack of land and water use coordination under NAFTA, and the outsourcing of water-intensive food production from the United States to Mexico.

In contrast to this extensive and impressive display of international cooperation at the bureaucratic level, on the ground a humanitarian crisis in the border region has been intensifying over the last 25 years.

In addition to the oversight by the IBWC, water issues are monitored and managed on the U.S. side by the EPA and Bureau of Reclamation (BOR). In Mexico, controlling agencies are the Comisión Nacional de Agua (CNA) and the Comisión Internacional de Limites y Aguas (CILA). Both countries also work jointly under the Border Environment Cooperation Commission (BECC).

Death in the desert

In contrast to this extensive and impressive display of international cooperation at the bureaucratic level, on the ground a humanitarian crisis in the border region has been intensifying over the last 25 years. In 1994, the United States began implementing a policy of preventing illegal immigration through “deterrence.” Deterrence in this instance means making entry more difficult and more painful. This policy has reached a particularly cruel incarnation under the current administration with its practice of separating children from their parents—purposefully inflicting suffering as a warning to others who might be thinking of attempting to cross illegally into the United States from the south.

But even long before the family separations, the policy took the form of trying to force undocumented migrants into routes with harsher, more challenging terrain—rocky, exposed, difficult-to-access hardscrabble desert areas where daytime temperatures can exceed a hundred degrees. Instead of reducing the number of people trying to make the journey, however, the policy resulted in a spike in migrant deaths, which in the year 2000 increased by 34 percent from the previous year. Since the implementation of the policy in 1994, it is estimated that 10,000 undocumented migrants have died in the attempted passage.

Since the implementation of the "deterrence" policy in 1994, it is estimated that 10,000 undocumented migrants have died in the attempted passage to the United States.

Numerous compassionate U.S. citizens who live in the border areas have voluntarily initiated remedies to ameliorate this human suffering. A group called Border Angels supplies water at specific sites accessible to those crossing the dry regions. Water Station is another large-scale effort based in Escondido, California. The organization’s founders, John Hunter and his wife Laura, strategically place 50-gallon drums filled with jugs of water at locations in the Imperial Valley Desert.

1.5 billion bottles of beer on the wall

Another test for U.S.-Mexico relations involving water in the border region looms on the horizon, and it is not yet known if it will follow the amicable, professional course of the working relationship exemplified by the IBWC or if it will become another stain on border diplomacy.

Constellation Brands, one of the largest producers of beer in the United States, has made a deal with the Mexican state of Baja California to build a brewery in Mexicali, and the residents are not happy.

Agriculture in the area has been limited by a long-term drought, and farmers are concerned that the brewery, which will produce 4 million bottles of beer a day (nearly 1.5 billion bottles a year), will drain the water supply, leaving them with too little for their crops. Farmers and others have united in a protest movement called Mexicali Resists, setting up a camp near the proposed construction site with large signs declaring, “Constellation go home,” and provoking violent confrontations with riot police and armed company security guards.

The protestors see the deal as a clear exploitation of Mexican water and Mexican labor, arguing that if there were real advantages to having a brewery in the area, the company would have located it in a U.S. city. The mayor of Zaragoza, a town in the state of Coahuila, claimed that a Constellation Brands brewery there had used so much water that it drained the town of its drinking water, a charge which the company denies.

Perhaps, if thoughtful leaders prevail, these “brewery wars” can end peacefully, and the stakeholders in both countries will be able to raise a cold one in a toast to international relationships serving the interests of the greater, common good.

Heineken, the Dutch mega-brewery which produces Tecate, Bohemia, and other Mexican beers, has announced its plans to enlarge an existing facility in Tecate, siphoning off even more water from the already over-used aquifers in the Mexicali region. Other contentious infrastructure projects in the same area, in which the authorities acted high-handedly and secretively, have sown deep distrust of the government and its intentions among local citizens.

How these conflicts will ultimately be resolved—following the model of positive cross-border cooperation seen in the 2017 water agreement and at the IBWC or more in line with the cruel and cavalier treatment of migrants seeking asylum or a better life—is still very much up in the air. Perhaps, if thoughtful leaders prevail, these “brewery wars” can end peacefully, and the stakeholders in both countries will be able to raise a cold one in a toast to international relationships serving the interests of the greater, common good.

Seth Freeman is a Pacific Council member, a writer/producer for television, a journalist, and a playwright, and he has a Master’s degree in Public Health from UCLA’s Fielding School.