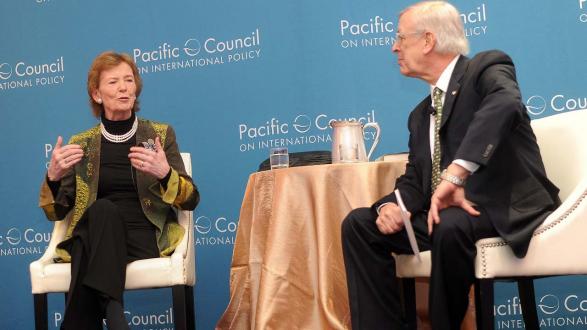 In 2015, the world witnessed the worst refugee and migrant crisis in seven decades as millions fled extreme drought, armed conflict, and unlivable conditions. Last year was also officially the hottest year in the historical record.

“Human activity is causing the greenhouse gas emissions that are causing the warming," remarked Mary Robinson, the UN Secretary-General's Special Envoy on Climate Change, at a special Pacific Council event on January 12 held together with the Conrad N. Hilton Foundation. “But it is not being done by those most affected.”

Robinson, the first woman president of Ireland (1990-1997) and the former UN High Commissioner for Human Rights (1997-2002), was in Los Angeles to accept the Council’s Warren Christopher Public Service Award. In an on-stage interview with Marc B. Nathanson, Co-Chair of the Pacific Council Board of Directors, she emphasized the stakes involved in tackling climate change in 2016. 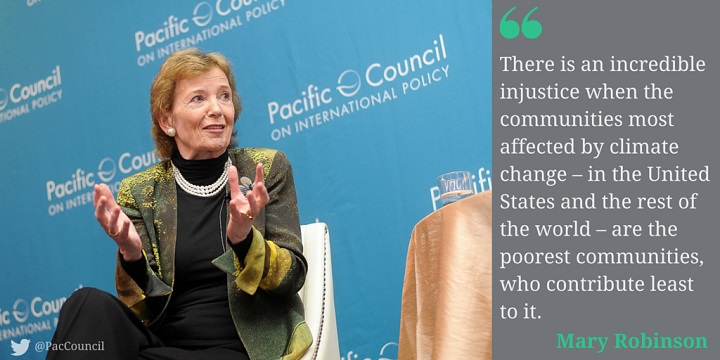 “We will have even more refugees and migrants in 2016 because of climate change," Robinson explained. "Climate change doesn’t cause 100 percent of these problems, but it aggravates all of them.” In fact, if the climate crisis continues to worsen, argued Robinson, the worst is yet to come. “The population of Africa will double by 2050. But the capacity of Africa to feed itself will be diminished by climate change. A lot of them will try to get to Europe.”

When asked by Nathanson about the origins of her work on climate justice, Robinson said that it starts with the injustice of climate change. “There is an incredible injustice when the communities most affected by climate change – in the United States and the rest of the world – are the poorest communities, who contribute least to it.”

We need to link human rights, development, and climate change together, she argued. “For most of the world, human rights are about more than just civil liberties. Fundamental human rights include the right to food, clean water, and shelter. Those are directly linked to the consequences of climate change.”

Another major element of her work on climate justice relates to gender discrimination. According to Robinson, “the gender dimensions of climate are huge. If you undermine very poor livelihoods, who has to put food on the table? The mother. She has to go further for the firewood, work harder, and become more resilient.” Comprehensive and just methods of climate action must recognize these dimensions of the issue, she said, beginning with understanding “the importance and richness of gender equality and diversity.”

Mary Robinson became the second recipient of the Pacific Council’s Warren Christopher Public Service Award, following Hillary Clinton in 2013. Her career includes service as the UN Secretary-General’s Special Envoy to the Great Lakes Region of Africa (2013-2014) and her current appointment as the UN Secretary-General’s Special Envoy on Climate Change. Today she leads the Mary Robinson Foundation—Climate Justice as President. In 2009, she received the Presidential Medal of Freedom—the nation's highest civilian award—from President Obama. 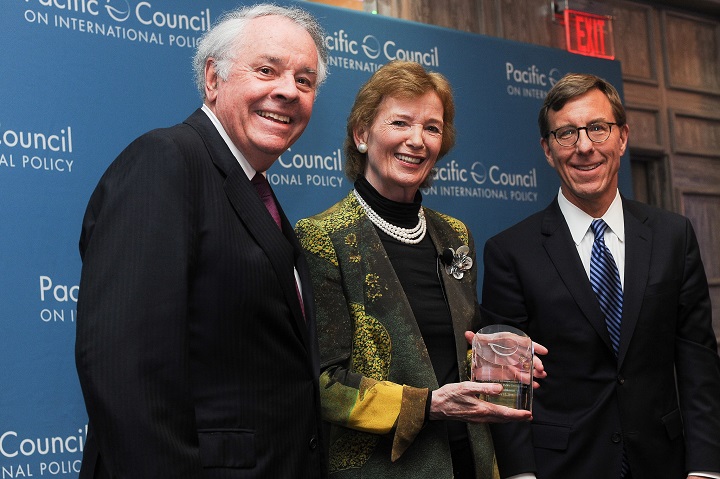 “The Christopher Award seeks to honor the life and legacy of Warren Christopher," said Robert H. Tuttle, Co-Chair of the Pacific Council, in presenting the award on January 12. “It is presented to someone who demonstrates commitment to international and domestic affairs, to the highest ethical standards, to the promotion of the common good, to equality and fairness, and to government service as a noble pursuit.”

Former U.S. Secretary of State Warren Christopher was the longtime Chair of the Council's Board of Directors. His career spanned service as a young Naval officer, an attorney at O'Melveny and Myers, the nation's top diplomat, and the head of what came to be called the Christopher Commission in the wake of the Rodney King incident. He was awarded the Medal of Freedom by President Jimmy Carter in 1981 for his role in negotiating the release of 52 American hostages held in Iran for 444 days.

“This means a great deal to me because I knew Warren Christopher," said Mary Robinson as she accepted the award. “I met him on a number of occasions, and he impressed me as the ultimate person who served the public well in governmental office. He just knew, in a very particular way, what it meant to have the honor to serve. That’s leadership. I am honored to receive this award.”