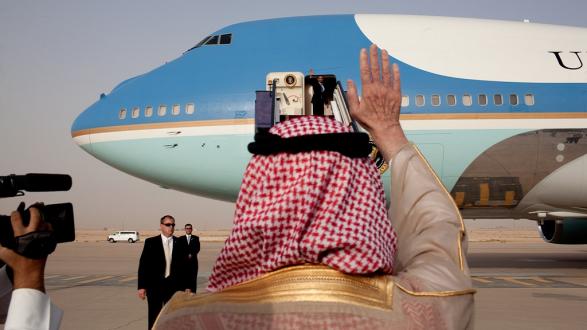 It is not clear what U.S. strategic objectives are in the Middle East, Dr. Jerrold D. Green told Pacific Council members in a Situation Briefing teleconference on recent developments in the region, including President Trump’s recent visit, Qatar’s ongoing conflict with an array of Arab states, and the terrorist attack in Iran. Green is the President and CEO of the Pacific Council on International Policy.

"Traditionally and historically, American policy toward the Middle East has been flawed," said Green. "This is not something that is unique to the Trump administration. Be it President Obama’s mishandling of Syria or President Bush’s misguided war in Iraq, history is replete with U.S. missteps in the Middle East. I can say with sorrow and confidence that President Trump is continuing that tradition."

Green said that the fundamental flaw in U.S. policy lies in a consistent misunderstanding of the region. In addition to Turkey, the Middle East has three significant actors: Israel, the Arab world, and Iran. The United States has traditionally had good relations with two of those sets of actors, but never simultaneously with all three which has caused endless problems and continues to do so.

"An effective U.S. policy to the Middle East needs to take into consideration the significance of Israel, the Arab world, and Iran. There is nothing to be gained by demonizing any of the three."

"An effective U.S. policy to the Middle East needs to take into consideration the significance of Israel, the Arab world, and Iran," said Green. "There is nothing to be gained by demonizing any of the three."

Green pointed out that despite the fact that Secretary of Defense James Mattis and Secretary of State Rex Tillerson believe Iran is complying with the terms of the nuclear deal, the United States continues to shortsightedly undermine the agreement through hostility towards Iran. As a result, he said, President Trump may be creating a self-fulfilling prophecy.

"It is becoming increasingly difficult to make sense of U.S. policy toward the Middle East," explained Green. "The White House is not even in agreement with itself. What is our strategic objective in Iran? Would we like it to cease being an Islamic republic? Would we like the Iranians to abandon even semi-democratic electoral politics in favor of a military coup-type government like Egypt or a non-democratic traditional monarchy like Saudi Arabia? We have not made it clear to ourselves and to the American people what our expectations are, let alone to the region or to our allies."

As President Trump arrived in the Middle East for his first foreign trip, Iran held a presidential election. President Hassan Rouhani was reelected to a second term.

"Despite the fact that the Iranian electoral process is deeply flawed, it was noteworthy that no one was certain in advance who would win," said Green. "Elections where you do not know the outcome up front have a certain credibility to them. For Trump to be extolling the glories of Saudi Arabia while a relatively democratic election was taking place across the Gulf struck me as rather ill-timed."

"What is our strategic objective in the Middle East? We have not made it clear to ourselves and to the American people what our expectations are, let alone to the region or to our allies."

In regards to the recent terrorist attack, Iran accused Saudi Arabia of having ISIL carry out the twin attacks in Tehran early this month although there is no evidence to support this view.

"I thought the U.S. reaction to the terrorist attacks in Iran was inadequate, not constructive, and cold and cursory," said Green. "If Iran is the victim of a terrorist attack, this is one area in which all people of goodwill can agree and come together."

Green said he was also unclear as to the strategic objective of Mr. Trump’s trip to the Middle East.

"If Trump’s trip to the Middle East was a success as he claimed, what benefit do we derive from actions against Qatar, which is the home to 11,000 U.S. troops and a major U.S. airbase? Why would we undermine a small and comparatively weak country of 2.3 million people? I do not see the strategic logic," he said. "It was unclear to me what he hoped to achieve."

"Why would Saudi Arabia up the ante so dramatically when the Saudis have so much at stake as they launch significant economic and political reforms at home? I assume that they assume that this is something the Trump administration would support," said Green. "Something emboldened Saudi Arabia to take the lead in cutting diplomatic ties with Qatar. In part, this signified a significant change in U.S. policy in which we are now embracing the kinds of regimes of which we traditionally have been somewhat more critical."

"Defense Secretary James Mattis' promise that ‘the United States honors its commitments’ suddenly has incredible power and impact in a world that seems to have gone crazy."

A Pacific Council delegation, including Green, recently traveled to Qatar and the United Arab Emirates to explore the region’s economy, culture, and political environment.

"Uniformly, we heard from high-level Emiratis and Qataris great enthusiasm for President Trump’s election," said Green. "Obama tended to overplay our relationship with Iran at the perceived expense of the Arab world. As a result, the Arab world was generally very happy about Obama’s departure and Trump’s election."

When asked about the potential for the United States to take military action against Iran, Green replied that as long as Secretary Mattis is in office, there is "little likelihood that this would happen. Despite being a critic of Iran, Secretary Mattis has noted that Iran is adhering to the terms of the nuclear deal and that ‘the United States honors its commitments.’ Those words suddenly have incredible power and impact in a world that seems to have gone crazy."