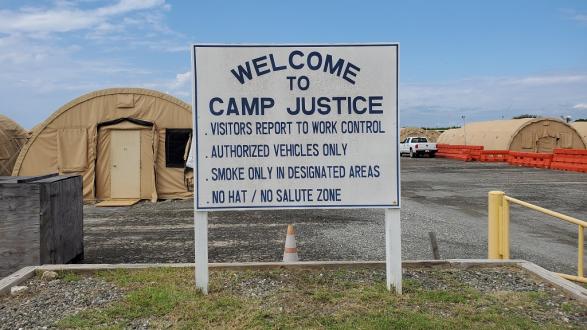 In February 2020, I attended the 9/11 military commissions as a member of the Pacific Council’s Guantánamo Bay Observer Program. These are my observations.

Pre-trial hearings of Khalid Sheikh Mohammed (KSM), the alleged plotter and 9/11 “mastermind,” along with four others charged with aiding the 9/11 attacks, Walid bin Attash, Ramzi bin al-Shibh, Ammar Al Baluchi, and Mustafa al-Hawsawi, have been ongoing since 2008. Trial is calendared for 2021, the 20th anniversary of the 9/11 attacks.

The pre-trial hearings in this high-profile case have been fraught from the start with dramatic battles both inside and outside the courtroom, over trivial issues, such as the types of vans the detainees are transported in, to serious ones, such as allegations of spying on defense counsel, violations of attorney-client privilege, and the like.

One of the government’s primary concerns is the risk that national security secrets will be leaked during trial. For example, some of the testimony recently elicited from Dr. John Mitchell (one of the co-creators of the “enhanced interrogation” techniques, as detailed in the U.S. Senate Select Committee on Intelligence’s report on CIA torture) necessarily touched upon operations conducted by the CIA, FBI, and other intelligence agencies tasked with extracting information from detainees during the War on Terror.

As Judge Shane Cohen, who was presiding over the proceedings, has acknowledged, there have already been “spills” during pre-trial hearings. [Editor’s note: On March 25, 2020, Judge Cohen submitted his resignation as presiding judge of the GTMO proceedings.]

Due in part to the work of the Pacific Council, the proceedings have become more transparent over the past few years, upholding the constitutional guarantee of a “right to a public trial” and ensuring that the proceedings are not conducted wholly in secret.

To curb and/or eliminate these spills, the military commissions have put in place several deterrents. First, both military and civilian personnel, including attorneys, paralegals, interpreters, and others, are required to obtain top security clearances to work on the case. (Although defense counsel’s clearances are apparently not as high as the prosecution’s clearances.)

Second, the court holds a substantial number of sessions in secret. However, due in part to the work of the Pacific Council, the proceedings have become more transparent over the past few years, upholding the constitutional guarantee of a “right to a public trial” and ensuring that the proceedings are not conducted wholly in secret. For this reason, legal observers, 9/11 victims’ family members, and other interested parties can either: 1) attend the hearings in person (through select organizations), or 2) watch the proceedings over a video feed in Maryland.

Control Over the Proceedings

For the “public” hearings, an additional safeguard has been put in place. In Guantánamo, a glass partition separates the courtroom from the “visitors’ bay,” and a 40-second delay between the court’s relay is imposed—once again, to prevent classified information from being spilled into the public domain. Once there is a risk of a spill, a button is pushed, a red light flashes, the video feed is cut, and the proceedings go dark.

This begs the question: who pushes the button? Judge Cohen maintains that he is the only one with the authority to do so. His predecessors were not so fortunate. In 2013, the red light went off (seemingly) sua sponte, causing chaos in the courtroom, as no one could determine who had unilaterally triggered the red light. (It was later determined to be the CIA) In response, then-Judge Pohl issued an order to the effect that he possessed sole discretionary power to trigger the red light.

Despite possessing such singular power, Judge Cohen is still informed by counsel (i.e. the prosecution) when to push the button. On February 19, 2020, James Connell, learned counsel for Ammar Al-Baluchi, raised the deeper question of who directs counsel to kickstart that process.

That morning, Connell contended that the prosecution had ushered in a secret “silver device,” which facilitates communication with the outside world (the maximum-security courtroom is supposed to be entirely closed-off). He alleged that the government was using a “CIA device to assist in their prosecution,” in contravention of constitutional principles of due process.

Gary Sowards, lead counsel for KSM, alleged that the button [that ends video access of the proceedings to protect national security] had nothing to do with national security, but rather was being used to "protect those in the highest echelons of the CIA."

His concern was that the CIA and/or other intelligence agencies, monitoring the proceedings in real time, have the ability to direct the prosecution and, in turn, the judge, to push the button. (Gary Sowards, lead counsel for KSM, went a step further—he alleged that the button had nothing to do with national security, but rather was being used to “protect those in the highest echelons of the CIA.” Sowards claimed that the CIA was leveraging 21st century technology to conceal torture techniques developed in the 15th and 16th centuries.)

In response, Judge Cohen affirmed that it is a matter of public record that the Original Classification Authorities (OCA) are monitoring the proceedings. He insisted that “we cannot have spills—that is the bottom line.” He admitted that he had granted the prosecution’s ex parte installation of the CIA device in the courtroom, meaning that the defense had no idea what the device was or that it had been approved by the court. However, he rebuffed the notion that the device was being used as a litigation strategy: “No one is providing litigation advice to the U.S. government. There is no spying going on in this courtroom. There is nothing nefarious about this. [It is] intended to avoid spills.”

Connell remained unconvinced. He alleged that the “last activation of the security device made me believe there’s more to the process.” In particular, he contended that the two prosecutors “handling [Bruce] Jessen” (the other co-creator of the “enhanced interrogation” techniques, who testified recently in pre-trial hearings) did not understand why they had requested the judge to press the button.

The concern, as a litigator, is that some third party has the ability to halt the proceedings at will, without the concurrent power to determine what is “off-limits,” thus inhibiting one’s ability to, for example, continue examining a key witness without impinging on national security concerns. If you don’t know what the classified information is (and further, if no one else in the courtroom does), then how can you recalibrate your questioning to avoid additional spills? (It is more difficult to confer with a person in Langley than with a member of the prosecution team.)

"If there is any evidence of spying, I will dismiss the charges without thinking twice about it."

Judge Cohen maintained that he has “trusted counsel” to inform him when to hit the button. If he permits spills, he declared, “I am in violation of the law.” He displayed a steadfast conviction in the legitimacy of the proceedings, while conceding that the process is not perfect. In particular, he pointed out that 40 seconds is a negligible amount of time in which to determine whether classified information is at risk of being leaked.

Judge Cohen was dismayed at the level of distrust amongst counsel, although he granted that it might not be unwarranted. (For instance, in 2013, one of the defense teams discovered that a smoke detector in a client-meeting room was actually a secret listening device.) Judge Cohen claimed that, in his 21 years as a practicing attorney and judge, he has never before witnessed this level of animosity. In granting the prosecution’s ex parte for the silver device, he had “misunderstood and underestimated the skepticism and distrust among the parties.”

In response, Connell pleaded, “Then why didn’t you include us?” He argued that “more transparency” would mitigate further suspicion “if our goal as a community is to avoid spills.”

Judge Cohen agreed. He stressed his own impartiality and the fine line upon which they are treading, balancing constitutional principles with national security concerns. He dismissed allegations that the silver device is being used to spy on detainees and their attorneys, insisting that, “If there is any evidence of spying, I will dismiss the charges without thinking twice about it. That absolutely cannot go on, and it will not go on in my courtroom. I will affirmatively state that on the record now, and I will never back away from that.”

Efforts towards greater transparency in the 9/11 proceedings are apparent as we approach trial. However, it is difficult to conclude that this goal is being accomplished.

As a further display of transparency, on March 2, 2020, Judge Cohen declassified the ex parte filing description, revealing the device to be, at least in name, a “teletype” machine, a historic device. The teletype was one of the first machines ever used to transmit messages over a variety of communications channels, including radio and microwaves. An archaic machine, operating in the most high-tech courtroom in the world—yet another paradox of the Guantánamo Bay proceedings.

Efforts towards greater transparency in the 9/11 proceedings are apparent as we approach trial. However, it is difficult to conclude that this goal is being accomplished. Certainly, we have learned more about the government’s role in years past. And the court seems poised to adjudicate the matter, once and for all. Yet despite the good faith of Judge Cohen and the appearance of greater transparency, what remains clear is that the flow of evidence continues to be controlled by a deus ex machina.

Gabriel Beugelmans is a Pacific Council member and an attorney at Nelson & Fraenkel LLP.