In the Midst of a ‘Monumental Shift’ in U.S.-NATO Relations 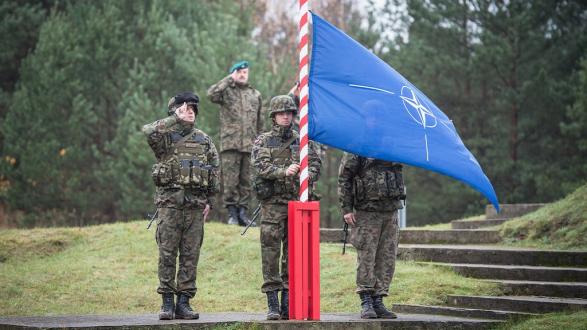 Mattox is a Global Women’s Leadership Initiative fellow at the Wilson Center. Braw is a nonresident senior fellow at the Atlantic Council. The discussion was moderated by Dr. Mietek P. Boduszynski, an assistant professor of politics at Pomona College.

"I don’t think NATO and the United States are on a collision course, but they’re on a clear course of change," said Mattox, "a change that will inevitably challenge the historical course of the transatlantic alliance since its inception in 1949. NATO is in the midst of a monumental shift in strategy, organization, and enhanced resilience and coherence."

Some NATO member states are worried that the United States will not protect them against unfriendly aggression. In July 2016, then-candidate Donald Trump said U.S. military support for NATO member states was conditionally based on whether they meet their financial obligations to the bloc, a departure from more than 60 years of bipartisan foreign policy in the United States.

"NATO is in the midst of a monumental shift in strategy, organization, and enhanced resilience and coherence."

One day before the Pacific Council’s Situation Briefing, U.S. Defense Secretary James Mattis essentially issued an ultimatum to NATO members, saying, "America will meet its responsibilities, but if your nations do not want to see America moderate its commitment to the alliance, each of your capitals needs to show its support for our common defense" by the end of the year. Meanwhile, Russia and NATO are both currently engaged in building up an unprecedented military presence in the Baltic region.

"It’s clear that all 28 member states—and soon to be 29 with the inclusion of Montenegro—agree on the fundamental commitment to NATO," said Mattox. "But of course there are a lot of differences in detail, particularly as it relates to burden-sharing. I don’t think Secretary Mattis’ comment that the United States might ‘moderate its commitment to NATO’ is misplaced. It is to be taken seriously. The United States cannot be expected to carry 72 percent of the burden indefinitely."

Braw added that NATO has not lost its relevance since the end of the Cold War but that there is a recognition in Europe that this is a time of major change for the alliance.

"Nobody believes Trump would ever seriously consider fully retreating from NATO, but Europe does know it has to do more to provide for its own security," said Braw. "One country in particular can do more and that country is Germany. You can’t just beg for security, you have to put something in yourself. This is certainly a wake-up call for Europe to step up to the plate."

"One country in particular can do more and that country is Germany. This is certainly a wake-up call for Europe to step up to the plate."

At the same time, Braw pointed out, spending 2 percent of GDP on defense doesn’t actually measure commitment to NATO.

"It just means you’re putting serious money into your own defense to collectively benefit the alliance," said Braw. "Italy could spend 10 percent on defense and it wouldn’t necessarily benefit NATO in any sort of way. Italy currently spends just 1 percent on defense, but it provides a crucial element of security in Europe because its Coast Guard and Navy patrol the Mediterranean. That’s a lot more important than Italy spending 2 percent on defense, which it could achieve by buying a bunch of tanks it doesn’t need."

Mattox laid out the three phases of NATO to date: the Cold War of 1949-89, the peace dividend of 1991-01, and the age of terrorism of 9/11 to 2014. She then argued that NATO has entered a fourth phase prompted by the takeover of Crimea by Russia and the events in Ukraine.

"Russia has embarked on a modernization of their defense spending," said Mattox. "No one knows what Russia will do next. Some worry they’ll go into Moldova, some worry about the Central Asian countries."

"Every European capital in NATO is pinning their hopes on Defense Secretary James Mattis. There is a sense that as long as he’s there, it will be okay."

Braw pointed out that Russia has put several 9K720 Iskander missile launchers in Kaliningrad, a Russian province that is separated from the rest of the country and sandwiched between Lithuania and Poland along the Baltic Coast.

"Those missiles can travel up to 500 kilometers, putting them in the range of several European capitals," said Braw. "They’re also extremely accurate, so if you wanted to hit the Royal Palace in Stockholm, the Iskander would reliably hit the Royal Palace in Stockholm. This is a very problematic development because it puts a wedge between NATO allies about if and how to respond, since Sweden is not a NATO member. That’s exactly what the Russians intended."

Braw also said that there is alarm in Europe about Trump’s ties to Putin.

"Every European capital in NATO is pinning their hopes on Defense Secretary James Mattis," she said. "They think he is the one person in the Trump administration who will be okay. He is hugely trusted in Europe, and has a made a very clear commitment to NATO in the past and spoken strongly for the need for the United States to be involved in alliances. There is a sense that as long as he’s there, it will be okay."