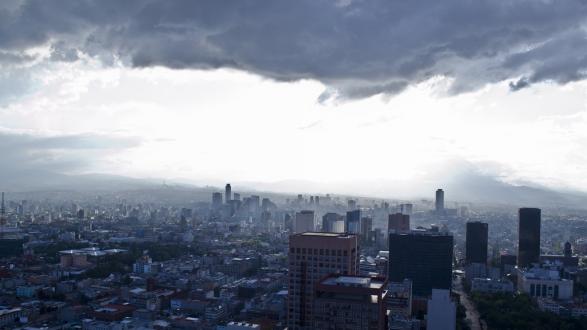 If you were in certain neighborhoods of Mexico City last month, you would have witnessed cars drowned in rainwater, the hoods and windshields peeping out from a sea of grey water. In a climate where rain is prevalent to the point of apocalyptic-level flooding, in a place constructed on a lake, one would expect that 100 percent of Mexico City’s inhabitants would have access to water. And that, of course, is the party line.

"The official numbers tend to point out that 100 percent of people have access to water," said Ana Gabriela Morales, manager of Water Management and Urban Resilience at the World Resources Institute Mexico.  But access doesn’t imply daily availability. "At least 1.7 to 2 million people that would get access to water maybe just twice a week or every Thursday or every now and then."

Morales was one of three speakers who called in on September 11 for a teleconference with the Pacific Council on International Policy to discuss the city’s mounting water crisis—a crisis that by all accounts should not exist in the first place.

The majority of the city’s recharge area is located in the southern part of the city, but that area is not being protected from urban growth or agriculture.

She was joined by Laura Gonzalez, director of the Water Program of the Gonzalo Rio Arronte Foundation, and Colin Herron, the Freshwater Program Director for Mexico and North Central America at the Nature Conservancy. Moderated by Gonzalez, the speakers explained the causes of the crisis, the current hydraulic models, and the strategies for conservation. They agreed that there was no single intervention plan, but that change would only occur through a multipronged approach.

Many of the proposed solutions involve high cost engineering, and officials haven’t yet looked into natural solutions. Currently, the main method of water supply is through pumping water from the aquifers, which are already overdrawn. Officials are also shipping in fresh water via tanker trunk and shipping out wastewater to the east of Mexico City.

Even though 55 percent of the water is subterranean, approximately 41 percent is lost through leaks in the infrastructure, Herron noted. The majority of the city’s recharge area is located in the southern part of the city, but that area is not being protected from urban growth or agriculture. When asked what they would do if granted the power to enact change, Herron said he would make it illegal to build on these recharge areas.

Since the land beneath Mexico City is comprised mainly of clay, which needs to stay moist, depleted aquifers have resulted in recent catastrophic earthquakes.

Little was discussed about the burgeoning debate over the privatization of water, an issue that Foreign Policy covered in 2015. Water has never been an equitable right, but while debates range about how best to deliver this necessity, Mexico City’s cost of water does nothing financially to encourage its residents to conserve.

The crisis affects more than just the drinking water. Since the land beneath Mexico City is comprised mainly of clay, which needs to stay moist, depleted aquifers have resulted in recent catastrophic earthquakes.

While Gonzalez emphasized the need for more examples and more data, NGOs such as the Nature Conservancy are doing their best to mitigate the problem. Agua Capital, which started this year, seeks to provide the public sector with research and tactics utilized in the private sector to provide water preservation techniques. For inspiration, these experts are looking towards Latin America for an example of how to manage the city’s water. Herron pointed out the sustainability of the Chilean model and that of Ecuador’s in Quito.

"We need to take into account the most vulnerable," Gonzalez said, later adding that "preserving diversity is our best strategy."

Mexico City is facing the same fate as many large cities across the globe. A tale that was once relegated to science fiction is quickly seeing a dawning reality in which water scarcity will be a central focus to global and local politics.

"Day Zero" is when the taps run dry and the city is left without any potable water, "which may be anywhere between maybe 30, maybe 60, maybe 80 years," Herron said, unsettled by the lack of data and concrete timeline. He described the ground water as a "black box," as the doomsday clock can’t be accurately calibrated in the same way that Cape Town’s could be. (Cape Town has more surface water, so that city doesn’t provide an accurate comparison).

Herron compared it to "a credit card that you’re using to pay a variety of services but of which the interest rate is never quite clear. It seems like you’re getting the rate of a very good deal until the bank calls you up and then you have a problem. We’re waiting for that call right now."

Regardless of the timeline, the city is facing the same fate as many large cities across the globe. A tale that was once relegated to science fiction is quickly seeing a dawning reality in which water scarcity will be a central focus to global and local politics.

Katrin Tschirgi is a USC graduate student participating in a foreign affairs reporting class taught by Professor Phil Seib, a collaboration between the Pacific Council and the Annenberg School of Communication and Journalism.

The views and opinions expressed here are those of the author and speakers and do not necessarily reflect the official policy or position of the Pacific Council.