To Maintain Control of the Seas, Trump Must Rebuild the Navy 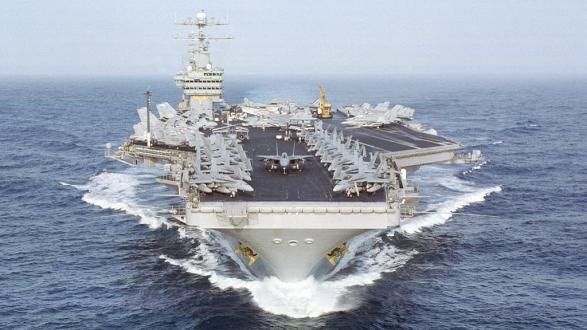 It is time for the United States to respond strongly to aggressions upon the high seas and demonstrate its continued command of the oceans. American resolve will deter aggression and miscalculation by the increasingly assertive China and Russia. The most important step America can take in this regard is fulfilling President Donald Trump’s promise to rebuild the U.S. fleet to 350 warships.

Now a power hostile to the international norms that govern the seas has emerged. China has sought to cordon off the South China Sea, through which $5 trillion in international trade passes each year, treating a vast swath of the Pacific as a territorial lake. China also eyes naval bases as far afield as the South Atlantic to support its expanding naval forces. Its massive shipbuilding program provides the ships to realize its maritime ambitions. At the same time, Russia has signaled its return to the Atlantic with nuclear submarine patrols not seen since the Cold War.

China and Russia have decided that the sea is the place to challenge America’s global leadership.

Having watched America "lead from behind" with "strategic patience" for the past eight years, the Chinese and Russians clearly believe spheres of influence can be had or wars won through the application of sea power. Presidents Xi Jinping and Vladimir Putin have decided that the sea is the place to challenge America’s global leadership.

Trump first announced his commitment to build up the Navy in Philadelphia two months before his election. He recognized that deep cuts in the nation’s military "only invite more aggression." The then-candidate emphasized that the expansion of the nation’s Navy would be "a 50-state" effort that would create high paying industrial and high-tech jobs. Candidate Trump understood that the nation’s defense industrial base was as much a national security asset as its ships, aircrafts, and tanks.

China hopes to achieve naval supremacy in the western Pacific and Indian Ocean by 2030. The purpose of Russia’s stealthy submarines and its fast missile-laden corvettes is to effectively separate Europe from North America, shattering the NATO alliance, in the event of war. Russia can be more patient, knowing that if China can establish a Pacific maritime sphere of influence, it soon will have one of its own.

Rebuilding the fleet to 350 ships is the type of strength necessary to keep the peace.

Achieving the president’s goal of 350 ships would deny China and Russia their strategic goals. Rebuilding the fleet in the short span of Trump’s eight years in office would convince China and Russia that it is not an opportune time to challenge the United States at sea. A fleet of this size would provide American presence in the 18 critical maritime zones we patrol and provide the punch necessary to win should push come to shove.

Unfortunately, budget-cutters and sequestration fans have ensured that the fiscal year 2018 budget submission to Congress is essentially President Barack Obama's shipbuilding plan, which will never approach 350 ships. Its fiscal constraint betrays a belief that deficits and debts are more threatening than rising powers eager to carve up the world’s oceans into their own spheres of influence. Such thinking is naïve and fails the president by undermining his promise to the American people.

Trump’s words in Philadelphia show his understanding of a simple truth: American weakness is provocative. President Trump has summed up his national security policy the same way Ronald Reagan did: "peace through strength." Like Reagan, who famously built the nearly 600-ship fleet, Trump knows that rebuilding the fleet to 350 ships within his two terms in office is the type of strength necessary to keep the peace.
____________________

Robert C. O’Brien is a Pacific Council member and a partner at Larson O’Brien LLP. He served as a U.S. representative to the United Nations. He was also a Senior Advisor to governors Scott Walker and Mitt Romney as well as Senator Ted Cruz during their presidential campaigns. His book While America Slept: Restoring American Leadership to a World in Crisis was released in September.

Capt. Jerry Hendrix (ret) is a retired U.S. Navy captain and award-winning naval historian. Hendrix is senior fellow and director of the Defense Strategies and Assessments Program at the Center for a New American Security.

A version of this article was originally published in the New York Observer.