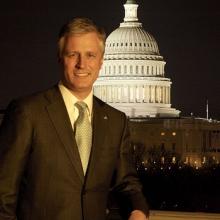 Robert C. O’Brien is the National Security Advisor to President Trump. He is the managing partner of Larson O'Brien LLP. His practice focuses on complex litigation and domestic and international arbitration. He previously served as the Special Presidential Envoy for Hostage Affairs at the State Department with the rank of ambassador. He also served as the U.S. Alternate Representative to the 60th session of the UN General Assembly, which met in New York from 2005 through 2006. In addition to his other duties as a US delegate, he addressed the General Assembly on the question of Palestine and represented the United States in the General Assembly’s Sixth Committee, which considered the Comprehensive Convention on International Terrorism. In July 2008, Mr. O’Brien was appointed by the President to serve a three-year term on the Cultural Property Advisory Committee, which advises the US Government on the Convention on the Cultural Property Implementation Act. He was Co-Chairman of the Department of State’s Public-Private Partnership for Justice Reform (PPP) in Afghanistan from 2007-2011 under Secretaries Rice and Clinton. He remains a member of the PPP Executive Committee.

Mr. O’Brien served as a senior foreign policy advisor to Governor Scott Walker. He also served as a senior advisor to Governor Mitt Romney’s presidential campaigns in 2008 and 2012. His articles and editorials on foreign policy and national security regularly appear in national publications. He is a frequent guest on Fox News, CNN and The Hugh Hewitt Show. Mr. O’Brien is a member of the Pacific Council on International Policy. He also serves on the Dean’s Advisory Board for Chapman University School of Law. Mr. O’Brien was a member of the International Republican Institute delegations that observed the presidential election in the Republic of Georgia in October 2013 and parliamentary election in Ukraine in October 2014. Mr. O’Brien and his family reside in Southern California.

Iran’s Policy of Kidnapping Americans Must End
Nikki Haley Stands Up for the United Nations' True Ideals
Why the United States Needs a 355-Ship Navy Now
To Maintain Control of the Seas, Trump Must Rebuild the Navy
Taiwan Enters the Cross-Strait Relations Danger Zone
Debate: The Foreign Policy Agenda of the 45th U.S. President
The Navy's Hidden Crisis: It's Too Small - and Getting Smaller
China's Next Move: A Naval Base In The South Atlantic?