Debate: The Foreign Policy Agenda of the 45th U.S. President 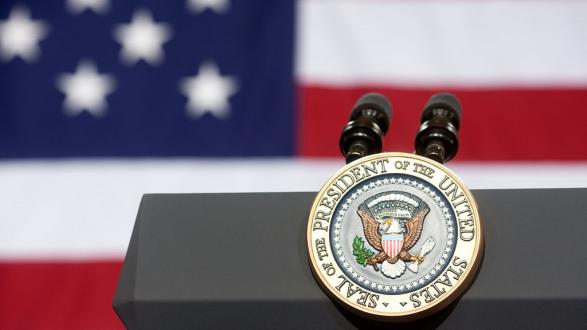 The following is an advance reading for the Spring Conference 2016 discussion Beyond Election Day: Examining America's Future.

We asked Robert C. O'Brien, Managing Partner of Larson O’Brien LLP, and Robert Shrum, Professor of the Practice of Political Science at USC, to each respond to the following:

The 45th President of the United States will be faced with a wide array of foreign policy challenges as soon as s/he takes the Oath of Office. What are the three issues that will merit the most attention in the first 100 days, and do these issues entail a continuation of the current U.S. administration’s foreign policy agenda or a pivot?

A National Security Agenda for the Next President

The world in 2016 is a very dangerous place. Russia has invaded Ukraine and annexed the Crimea. China asserts control over the entire South China Sea building a “Wall of Sand”. ISIL controls a caliphate in the heart of the Middle East the size of Britain. Iran and North Korea continue their nuclear and missile programs unabated.

Compared to Russia, China, Iran, the Islamic State Caliphate, North Korea, Venezuela or Cuba, the United States and its allies remain in remarkable shape and should triumph under any circumstance. Only a decision to continue the Obama Administration’s retreat from the world stage and determination to fundamentally transform our way of life and military could lead to defeat. Building upon the clear advantages enjoyed by the United States, the next president can turn the tide of affairs by taking a path very different than the present one, which sadly has an uncomfortable similarity to the path that lead to the fateful events of 1938.

First, he or she must be committed to a national security policy of "peace through strength." Rebuilding our military will require determination and funding. The equipment and platforms developed during the Reagan years are in many cases over 30 years old. The 600 ship fleet is down to 272 ships and falling. The bomber wing of the air force relies on B-52s that, if they were people, would be the grandparents of their current pilots. Even President Obama’s hand-picked nominee for Secretary of the Army says that the force is too small to accomplish its missions. The Marine Corps is in the same situation and lacks the requisite number of amphibious ships and “connectors” to get them to shore in a conflict. The Coast Guard is down to one ice-breaker at a time when the Arctic is turning into a key strategic shipping lane.

The national security challenges that America faces are indeed grave. They can, however, be overcome.

Second, the next president must reassert American leadership. The White House’s strategy of “leading from behind” is not leadership. America used to be considered the “leader of the free world.” It is very rare to hear that term used any longer. It should be and we should be proud of it. Being the leader of the free world does not mean being the policeman of the entire world. It does mean that America should use its moral authority to promote the idea of free men and women and free markets for the betterment of the world. Like rebuilding our defenses, rebuilding our alliances is critical.

Third, the American economy is the engine of free world growth and will sustain the rebuilding of American defenses. The economy must be freed from the shackles of over-regulation, punitive corporate taxation that keeps profits from U.S. companies stranded overseas, politically-motivated permitting decisions like the administration’s refusal to allow the Keystone pipeline to be built, and Obamacare and other government mandates that kill jobs. The safety net must be reformed with bipartisan compromises that ensure a secure retirement for Americans and basic services for those in need. Without such reform, entitlements and debt service will, in coming years, consume the entire federal budget leaving nothing to defense or other governmental functions. With pro-growth policies like those instituted by President Reagan, America will have the resources necessary to defend itself and to lead the free world.

The national security challenges that America faces are indeed grave. They can, however, be overcome. Indeed, it is still possible to overcome them before they become problems so great as to lead to 20th century-type cataclysmic events.

Appeasement and retreat, however, are not the answer. The stakes in this dangerous time could not be higher.

In his undelivered speech in Dallas on November 22, 1963, John F. Kennedy observed: "There will always be dissident voices heard in the land, expressing opposition without alternatives, finding fault but never favor, perceiving gloom on every side..." He might have been describing the 2016 presidential campaign on the Republican side. The challenges we face as a nation are grave, but the United States remains the greatest military and economic power on earth. And as a new president takes office, how we exercise that power, and in what arenas, will be determined both by the outcome of the campaign and the irrepressible realities of a fraught world.

Whatever we do between now and Inauguration Day, terrorism will continue to cast a harsh shadow. To answer terrorism with bigotry and bombast will not dispel the shadow, but intensify the storm. What lies before us is the long, twilight struggle of our generation, and perhaps of the generations to come.

We need patience and a calibrated, multifaceted strategy that reflects and responds to the grim truth that terrorism is now a centripetal force; its agents and cells feeding not only on fanaticism but on endemic frustrations in places like the poverty-stricken slums that surround Paris and pockmark Brussels. This requires of us something less seductive and arguably more effective than a reflex escalation of military action in the Middle East: a comprehensive commitment to break down barriers, open up opportunities, end the sense of hopelessness, and lift standards of living. That effort will never be as appealing as a campaign soundbite. The next president will have to put aside the nonsense of the campaign season and talk sense to the American people.

If instead of immigration reform, the next president builds walls, we will be the ones walled in, scorned for humiliating Mexico and the rest of the hemisphere.

Indeed, that imperative points to the single challenge now woven through the whole fabric of our foreign policy. As H.L. Mencken wrote, "For every complex problem, there is an answer that is clear, simple, and wrong."

Will we build on the Iran nuclear agreement or tear it up? A unilateral denunciation next January would leave the United States isolated from allies in Europe, create an even more unstable Middle East, and ensure Iran's pursuit of the bomb.

Will we widen detente with Cuba or reprise a discredited and futile embargo and return to the longest-lasting foreign policy failure in American history? The choice involves not just relations with Cuba, but our credibility across all of Latin America.

Will we lead the world on climate change or lapse into the simplistic and short-term comfort of climate denial? Will we make rational, long-term investments in our military or plunge into a heedless spending spree driven by the remnants of and yearnings for the Cold War?

If instead of immigration reform, the next president builds walls, we will be the ones walled in, scorned for humiliating Mexico and the rest of the hemisphere. Unless we invest in education and our workforce, the dream of freer trade across the Pacific or the Atlantic will be rejected as a nightmare for the American middle class.

From Russian ambitions in Eastern Europe and Chinese incursions in the South China Sea to the specter of global pandemics, the person who walks into the Oval Office on January 20, 2017, will face many dilemmas, but one overriding challenge. President Kennedy expressed it in the final paragraph of undelivered final speech: "We in this country, in this generation, are -- by destiny rather than choice – the watchmen on the walls of world freedom. We ask, therefore, that we may be worthy of our power and responsibility, that we may exercise our strength with wisdom and restraint..." What the 35th President asked of his country is what we should ask of the next one.
____________________

Robert C. O’Brien is the managing partner of Larson O'Brien LLP and a member of the Pacific Council. He has been a senior advisor to Governor Mitt Romney and Governor Scott Walker in their presidential campaigns. Follow him on Twitter: @Robertcobrien.

Robert Shrum is the Carmen H. and Louis Warschaw Chair in Practical Politics and Professor of the Practice of Political Science at the University of Southern California. He was a longtime Democratic strategist and media consultant, and a senior advisor to the 2000 Gore and 2004 Kerry campaigns.

Share your own opinion on social media ahead of Spring Conference 2016: what are the greatest challenges facing the 45th President of the United States? Tweet at us @PacCouncil: you can follow along and join the conversation on April 15 using #SpringCon16.