Maduro "Reelected": Can Democracy Ever Prevail in Venezuela? 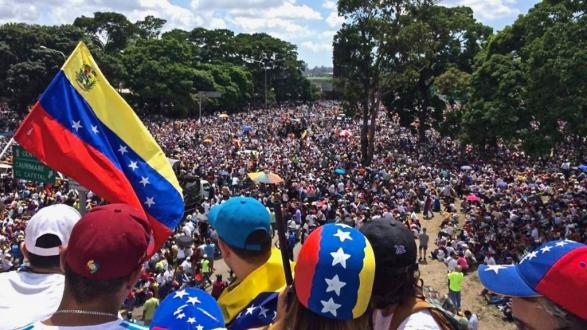 The West cannot always assume that elections reflect the will of the people, Katja Newman told Pacific Council members in the first installment of the Summer Teleconference Series.

The topic of discussion was Venezuela’s recent re-election of President Nicolás Maduro in a controversial election that many, including the United States, have called a sham, rigged, and unfair.

The May 20 election promised Maduro another six-year term in office, despite massive hyperinflation, food shortages, and large numbers of Venezuelans fleeing the country. While Maduro won the election with 68 percent of the vote, the historically low voter turnout reflected the frustration of Venezuelans in what they consider to be an illegitimate election, due to the ban of almost any opposition being allowed to run against Maduro (there was one oppositional presidential candidate). There were also numerous electoral violations, such as the denial of a recall, harassment of opposition leaders, coercion of voters, irregularities during voting day, and high abstention rates, according to Newman. Not to mention the complete lack of independence in governmental (including electoral) institutions.

"Venezuela is experiencing what is effectively an economic collapse and has turned into something very close to a failed state."

U.S. Vice President Mike Pence called the election "neither free nor fair," and said, "The illegitimate result of this fake process is a further blow to the proud democratic tradition of Venezuela."

So where does that leave Venezuela and the future of the country?

"The country is experiencing what is effectively an economic collapse" and has turned into something very close to a "failed state," said Duddy. He points to the country’s "worthless" currency value, decreased oil production, high rates of violence and inflation, and the short supply of food and medicine as evidence of the decline of the Venezuelan state.

The United States has attempted to punish the Venezuelan government by implementing sanctions on 60 Venezuelan officials, but according to Duddy, it has not dissuaded the government from "continuing to eviscerate the country’s political institutions."

Other countries have followed suit in the last few years. Additionally, Secretary of State Mike Pompeo called for the Organization of American States (OAS) to suspend Venezuela. The resolution has passed, and there is a possibility of suspension should there be enough votes.

"What is it that the international democratic community can do and what is that community willing to do to put the sort of pressure on Venezuela that might actually bring about change?"

But while the suspension would be a "diplomatic slap in the face," according to Shapiro, it "carries no practical implications for day-to-day life in Venezuela."

Duddy added that the OAS only recently showed any signs of being willing to sanction or suspend Venezuela, in part because of a long-standing oil subsidy relationship between the Caribbean and Venezuela.

However, recently there has been a change in attitude toward the crisis in Venezuela in much of the region, said Duddy. He points to the "incredible outflow of refugees" which has become a burden on Latin America, specifically Colombia and Brazil. "It has become unsustainable to defend the notion that what happens inside Venezuela is only relevant to Venezuelans. There will be real consequences for the region," he added.

The Venezuelan government has so far been able to withstand diplomatic and political pressure, Shapiro said, so what can be done?

Both ambassadors pointed to oil as the obvious solution. Duddy pointed out that the United States is still the largest single market for Venezuela’s oil, and one of the few countries who pay full price. But Shapiro added, when it comes to oil, "do you hurt the ordinary people of Venezuela more, or the government more? That’s where we’re stuck right now. What is it that the international democratic community can do and what is that community willing to do to put the sort of pressure on Venezuela that might actually bring about change?"

"[That the Venezuelan opposition is not unified] just exacerbates the uphill battle."

Duddy added that the United States, Canada, and others are seeking ways to apply pressure that would not make the suffering of the Venezuelan people any worse.

So is there a possibility for Maduro and the opposition to begin some sort of dialogue?

Duddy said absent a willingness to discuss Maduro’s exit, it seems unlikely the people in power would concede to any kind of arrangement that would see them turned out of office.

Another major issue in predicting the future of Venezuelan democracy is the role of the opposition. Shapiro notes that the opposition is not unified and has major ideological differences between them.

"You can see the upsides and downsides of every proposed solution. The United States is busy trying to figure out the most effective ways to have an impact in Venezuela."

So what can the United States do moving forward?

Duddy points to eliminating Venezuela’s dependence on the international financial system, in addition to applying a certain amount of pressure within the oil sector without enacting a complete embargo, and working with Europeans and others to stockpile humanitarian assistance to prepare for a time when the United States can render such assistance.

"You can see the upsides and downsides of every proposed solution," said Shapiro. "The United States is busy trying to figure out the most effective ways to have an impact in Venezuela."

But it’s an ongoing conversation.

"We’ve been trying to do that since the days that Ambassador Duddy and I were there," said Shapiro.