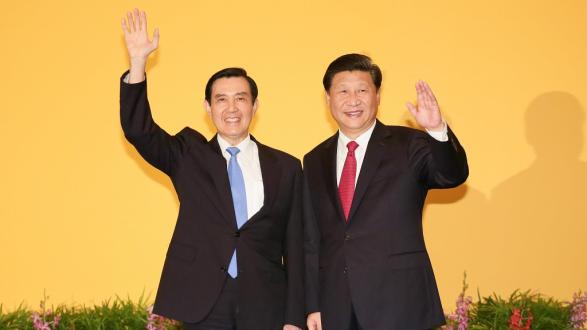 Relations between mainland China and Taiwan are deteriorating and must be restored, former Taiwanese President Ma Ying-jeou told Pacific Council members. The discussion was moderated by Ambassador Nina Hachigian, deputy mayor of international affairs for the city of Los Angeles.

Taiwan and mainland China have long had strained relations since the establishment of the People’s Republic of China in 1949. While President Trump has signaled clear support for maintaining U.S.-Taiwan relations, only 20 states officially recognize Taiwan as the Republic of China, and the United States is not one of them.

Ma said that the 1992 Consensus, in which both sides met to negotiate what the One China policy actually means, is the bedrock for relations between the two sides.

"If the young people of the two sides could meet and make friends early in their life, I’m sure the chances of sustainable peace would be possible."

Relations between Taiwan and mainland China have had their ups and downs. Ma pointed out that before he was elected president in 2008, the relationship was at a low point.

"Barely one month into my presidency, the two sides reached an agreement called the Three Communications: trade, travel, and mail," he said. "We also agreed that we will exchange tourists. This was a revolutionary change. At the time, there were only about 290,000 visitors from mainland China per year. By the time I left office, the number reached 4.2 million."

"In 2007, the number of mainland students studying in Taiwan was 823," he said. "By the time I left office, the number reached 42,000. This is very, very important because I always believe that if the young people of the two sides could meet and make friends early in their life, I’m sure the chances of sustainable peace would be possible."

Since Ma left office in May 2016, he said cross-strait relations have deteriorated.

"President Tsai Ing-wen so far has not accepted the 1992 Consensus," he said. "Her party generally supports Taiwan’s independence, so it makes it very difficult for her to accept the 1992 Consensus. But mainland China attaches so much importance to it. When we don’t have contact with mainland China, it could affect many aspects of our lives: trade, investment, and other things. I sincerely hope President Tsai will reconsider her position, because when I was president I accepted the 1992 Consensus but I didn’t do anything that would hurt our dignity or interests."

Exactly two years to the day before Ma’s discussion with the Pacific Council, he and Chinese President Xi Jinping became the first presidents of Taiwan and China to meet publicly, which was held in Singapore.

"We called the meeting between me and Xi Jinping ‘MaXi,’" said Ma. "We first established the ground rules for the meeting: neither side should refer to official titles. Instead of ‘People’s Republic of China’ and ‘Republic of China (Taiwan),’ we would just say ‘mainland’ and ‘Taiwan.’ And neither leader should be called ‘president’ or ‘chairman,’ just ‘mister.’ Mainland China said they wanted to pay for the expenses of the meeting because they have diplomatic relations with Singapore and we don’t. I said, ‘Okay.’ For beverages, they would bring 30-year-old Moutai and we would bring 25-year-old Gaoliang. After the banquet, we found that more Gaoliang was consumed than Moutai, so we won," Ma joked.

At the meeting, Ma and Xi reconfirmed that the 1992 Consensus is the common political ground of the two sides.

"We wanted to use this opportunity to further reduce hostilities between the two sides and to broaden and deepen the cross-strait contacts," said Ma. "We built a bridge of peace across the Taiwan Strait. My grand strategy is maintaining a peaceful relationship with China, a friendly relationship with Japan, and a close relationship with the United States. By doing that, we could maintain the balance."

"Unification should not only be peaceful, but also democratic."

"At the moment, the possibility of independence is diminishing," he said. "Domestically, we already have a self-ruled government. Internationally, there’s no chance of getting recognition from a lot of countries. Much like Catalonia, in the sense that no one will recognize us. So we better keep the status quo. On the issue of unification, we’d have to get the consent of the people. So unification should not only be peaceful, but also democratic. The mainland will not take any drastic action if Taiwan stayed as it is. So I think these issues can be worked out."

One area where Taiwan and mainland China agree, Ma said, is the South China Sea.

"Our position on the South China Sea, in many ways, is just the same as mainland China, in terms of territorial claim," he said. "The United States is concerned about land reclamation in the South China Sea, but according to the UN Convention on the Law of the Sea, countries can build artificial islands in Exclusive Economic Zones or the high seas without much difficulty. Even the Permanent Court of Arbitration said that what they did only violated environmental protection regulations, but the action alone isn’t necessarily in violation of the Convention on the Law of the Sea."