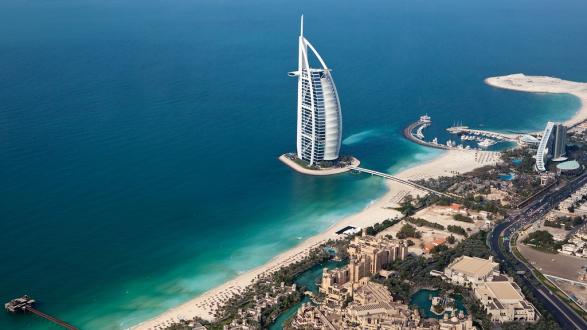 Faced with virtually no rainfall and extreme heat, Dubai is a growing city facing critical obstacles in sustainability, in which nearly every solution is met with a new challenge. Water is needed for life, but without natural supplies it must be pumped from the highly saline Persian Gulf and desalinated to potable standards. Yet energy costs are rising, due in large part to energy-dependent water generation and water-dependent cooling systems.

Although this vicious cycle has continued downward in recent years, telecommunications advances are now making it possible for governments and utilities to make better resource management decisions. And by harnessing the interconnected potential of renewable resources and human behavior, Dubai is now embarking on several transformative efforts.

The Coupling of Energy and Water

Developing a vibrant urban city in a land rich in hydrocarbons but poor in hydrological resources, Dubai faces significant challenges in sustaining environments in which humans can both survive and thrive. Even though large reserves of oil and natural gas exist in neighboring emirates, a strategy group at PricewaterhouseCoopers (PwC) found that “energy efficiency is a growing challenge in the [United Arab Emirates], due to population growth, economic activity, and high consumption rates that are unsustainable in the long term.”

Speaking at the Global Leaders Forum in Dubai, Suhail Al Mazroui, the UAE’s Minister of Energy and Industry, admitted that there is a need for the UAE to reduce overall energy demand by around 40 percent by 2050. However, he added concerns over the intertwined nature of water and energy, explaining that while water is needed for cooling in energy generation, energy is needed for desalination—the process of removing salt from seawater and making it potable.

Dubai’s water use is approximately 50 percent greater than the global average.

The data validates this concern, showing that Dubai’s water use is approximately 50 percent greater than the global average. Furthermore, PwC’s research discovered that “the energy required to desalinate seawater represents approximately 30 percent of the country’s total power consumption, primarily due to major issues in the way the UAE acquires fresh water.”

For example, the most popular way today is a cogeneration process associated with thermal energy plants, called “multi-stage flash” or MSF. Yet as explained in Dubai’s Renewable Energy Roadmap (REmap 2030), this manner of water cogeneration impedes optimal electricity generation through demand imbalances. By way of a seasonal example, REmap 2030 states that “this is especially true in the winter due to the reduced demand for electricity while water demand stays the same—dropping the power-to-water ratio (PWR) to much lower than optimal efficiency for the power plant operation.”

However, the bond between water and energy could be lessened through MSF alternatives, such as reverse osmosis (RO) or multiple-effect distillation (MED). Such a decoupling is endorsed in REmap 2030, which encourages “electricity-based desalination that is indifferent to the energy source,” further acknowledging that “sources could be geothermal, or solar hot water.”

The Rationalization of Solar

Announcing a response to the call for more efficient energy and water production systems, Smart Energy International this year reported that “the Dubai Electricity and Water Authority (DEWA) is planning to power the region’s desalination plants with solar power, and save approximately $13 billion between now and 2030, with a capacity target of 305 million gallons per day.”

Given Dubai’s desert climate, such a sunny outlook should not come as a surprise; as REmap 2030 found, “the UAE receives over 10 hours of daily sunlight on average—highly significant considering that on average the country has roughly 350 sunny days per year.” Nevertheless, even in Dubai, the economics of solar have not always been so favorable.

Even in Dubai, the economics of solar have not always been so favorable. However, given the city’s rapid growth in energy demand—and competitive hydrocarbon markets abroad—solar power is finally penciling out as a profitable option.

Historically, the low cost of UAE-sourced natural gas has disincentivized Dubai’s investment in alternatives. However, given the city’s rapid growth in energy demand—and competitive hydrocarbon markets abroad—solar power is finally penciling out as a profitable option.

The Utility of Modern Communications

While on the one hand the government is strengthening building codes, it is on the other hand easing rules that would otherwise deter investment in privately owned 21st century infrastructure. According to the CIA World Factbook, “The government has increased spending on job creation and infrastructure expansion and is opening up utilities to greater private sector involvement. The country's free trade zones—offering 100 percent foreign ownership and zero taxes—are helping to attract foreign investors.”

Barney Warf, an analyst for the Port Authority of New York-New Jersey, discovered positive correlations between such actions and the nascent global networks of the 1980s, observing that “the processes of deregulation, technological change, and internationalization have clearly imparted a series of differential advantages throughout the international urban hierarchy.”

Etisalat, a multinational Emirati-based communications company, believes investment in new technologies will have broad benefits, particularly for sustainability. One Etisalat press release projects that “the shift towards 5G will enable the UAE to achieve its global competitiveness targets, particularly its stated goal of achieving the world’s first position in Smart Government services.”

The UAE Telecommunications Regulatory Authority has publicly committed to “support and participate in a Smart City vision by bringing state of the art use cases to the UAE.”

The UAE Telecommunications Regulatory Authority (TRA) has endorsed these objectives and publicly committed to “support and participate in a Smart City vision by bringing state of the art use cases to the UAE.” To this end, a TRA Verticals Committee sub-working group has already begun its outreach to private sector vendors, addressing such topics as “Smart City, Smart Lighting, Smart Grid, Smart Building…” and the list goes on.

In the United States, similar drives toward the benefits of Smart Grids have been made by the U.S. Department of Energy: “More efficient transmission of electricity; reduced peak demand, which will also help lower electricity rates; increased integration of large-scale renewable energy systems; and better integration of customer-owner power generation systems, including renewable energy systems.”

Yet signaling the truest state of healthy competition, Saeed Mohammed Al Tayer, managing director and CEO of DEWA, has declared that “DEWA will disrupt the entire business of public utilities by becoming the world’s first digital utility to use autonomous systems for renewable energy and storage.”

Beyond information technology and its valuable data-driven insights, utilities must also consider a critical integration component regarding operational technology.

Beyond information technology and its valuable data-driven insights, utilities must also consider a critical integration component regarding operational technology. For instance, without wireless sensors, utility infrastructure has been “dark,” according to Matt Bellias, IBM’s global marketing lead for Watson IoT’s Asset & Facilities Management businesses. However, he notes that today “lower prices on tech solutions allow the utility to ‘light up’ more of their network, thereby both improving customer experience as well as reducing costs in operations and maintenance.”

Gordon Falconer, global director for Smart Cities at Schneider Electric, argues that more end-to-end planning is necessary for Smart Grids to realize their full potential: “Smart cities can have all of the Big Data analytics that they want—but if the underlying physical operating technology infrastructure, such as water or electricity, is not there, then residents are not benefitting.”

The Adoption of “Smart Living”

In addition to better utilizing renewables, modern communications also allow for greater gains on the conservation end of the equation among Dubai’s water and energy consumers. For instance, TRA regulators are already researching applications such as Smart Agriculture, using wireless irrigation sensors, and Smart Meters, reducing the energy required by climate control systems.

Especially for large water-thirsty buildings in hot climates, internet of things (IoT) solutions can provide a critical suite of services, which according to Forbes, “entails sensors, gateways, and wireless communications to deliver better data to the analytics engine that in turn presents better insights and actions to customers.”

Regardless of whether such innovations or future circumstances allow Dubai to wear the seal of a sustainable city, it is likely that its accomplishments will at least be hard-earned enough to help inform the creation of a more sustainable world.

The success of sustainable communities relies on both how well technology is designed, in addition to how well it will be embraced by end users. As suggested by Albino, et al., in the Journal of Urban Technology [Albino, V., Berardi, U., & Dangelico, R. M. (2015). “Smart cities: Definitions, dimensions, performance, and initiatives.” Journal of Urban Technology, 22(1), 3-21], “A smart city assessment must take into account that cities have different visions and priorities for achieving their objectives, but they must promote an integrated development of different aspects, both hard and soft.”

To this end, complementing Dubai’s present investment in the “hard” aspects of automated energy storage, PwC reported that “DEWA has also launched customer awareness campaigns that have, among other things, persuaded residents and businesses to set their air conditioners to warmer settings.” Although the proverbial drop in the bucket for some parts of the world, reductions in demand on energy-intensive and water-intensive cooling systems are anything but insignificant in Dubai.

The Lessons to Come

Despite positive advances in sustainability, Dubai’s future is prophetically not without new challenges. Studies have shown the Persian Gulf is becoming increasingly saline, which will make desalination increasingly expensive in the years to come. And sending mixed messages on the heels of huge investments in solar power, DEWA has at least one coal power plant under construction. As revealed by National Geographic, “The electricity will cost 40 percent more than solar power. It makes neither environmental nor economic sense—other than as a hedge against Dubai’s nightmare, an energy shortage that might limit the growth of the city.”

Nevertheless, the people of Dubai are not unfamiliar with balancing environmental challenges, the solutions to which cannot be said to be truly sustainable unless economically feasible in the long-run. At each obstacle—whether it be tied to energy, water, or an entanglement of the two—Dubai has looked to the latest telecommunications technologies to aid in implementing long-term, practical solutions.

Regardless of whether such innovations or future circumstances allow Dubai to wear the seal of a sustainable city, it is likely that its accomplishments will at least be hard-earned enough to help inform the creation of a more sustainable world.

Brian Chase is a Pacific Council member and the director of public affairs at AT&T.