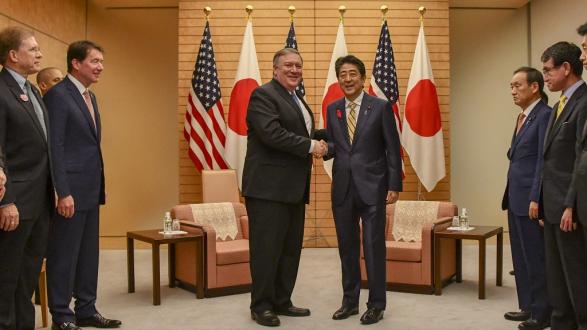 How have Prime Minister Shinzō Abe’s efforts to recalibrate Japan’s foreign policy affected his approach to the Middle East? Japanese policy in the region has often been forced to balance between U.S. priorities and Tokyo’s own energy security needs.

While Washington’s entanglements in the region are multiple and complex owing to numerous interests, security alliances, and close ties with Israel, Japan prefers not to pick favorites and seeks to maintain a realpolitik, economic-focused policy repertoire.

Even on those rare occasions when Japan has shown signs of a more activist foreign policy in the Middle East, the pendulum tends to swing back to a cautious, energy security-focused approach that reflects caution, neutrality, and the avoidance of military entanglements.

Japan’s trade balance with the Middle East at the end of 2018 was valued at $22 billion in exports and $93.8 billion in imports. Its top trading partners in the region are Saudi Arabia, the United Arab Emirates, and Qatar. Though attempts have been made to diversify Japan’s sources of energy over the years, the 2011 “triple disaster,” which led to Japan shuttering most of its nuclear plants, only reinforced these dependencies.

The result, as we argue below, is that even on those rare occasions when Japan has shown signs of a more activist foreign policy in the Middle East, the pendulum tends to swing back to a cautious, energy security-focused approach that reflects caution, neutrality, and the avoidance of military entanglements.

Japan and the Middle East: A History of Oil Dependency

The 1970s oil shocks that resulted from the OPEC embargo hit Japan hard. For a time, Tokyo abandoned its neutrality to side with the Palestinians in their conflict with Israel, a policy dictated by its immense need for Middle East oil. Over time, a muscular U.S. military presence in the Persian Gulf helped ensure that shipping routes for Japanese oil imports would remain secure.

The 1991 Gulf War was a watershed moment for Japan in the Middle East. Unable to deploy troops in support of the UN Security Council-sanctioned war effort, Japan participated by underwriting the costs of the war. It was a politically safe way to satisfy U.S. demands without becoming too deeply involved.

Yet, despite pledging $13 billion in support of Kuwait’s liberation, Japan’s effort was criticized as “checkbook diplomacy.” Former senior diplomats told us how dismayed Japanese officials were that a full-page advertisement in the Washington Post placed by Kuwait failed to count Japan among the coalition countries that contributed to the liberation effort.

Japan's participation in the 2003 Iraq War appeared to signal that, in the wake of 9/11 and new security challenges, Tokyo would more closely align itself with U.S. objectives in the Middle East.

In the 2003 Iraq War, then-Prime Minister Junichiro Koizumi broke from Japan’s non-interventionist approach to the region. After months of pressure from the George W. Bush administration and public debate about the nature of Japan’s role in Iraq, in early January 2004 a Japan Self-Defense Forces Iraq Reconstruction and Support Unit consisting of 600 soldiers deployed to Samawah, in British-occupied southern Iraq.

The location was chosen in large part because it was not an active combat zone. Rhetorically, Tokyo described the participation in terms that emphasized Japan’s support for Iraq and the Iraqi people, and said little about the U.S. military and the controversial invasion. The deployment was Japan’s largest since World War II and appeared to signal that, in the wake of 9/11 and new security challenges, Tokyo would more closely align itself with U.S. objectives in the Middle East.

Polls at the time showed that the deployment was opposed by more than half of the Japanese public, a number which only grew as the situation on the ground in Iraq deteriorated. It was only in July 2006, bowing to public pressure and opposition from within his own party, that Koizumi withdrew its contingent from Iraq, though he maintained a small Air Self-Defense Forces unit (ASDF) in the region until December 2008.

Prime Minister Abe came to power in December 2013 promising a new approach to Japanese foreign policy. Early in his tenure, Abe began his efforts to lessen restrictions on Japan’s use of force overseas, which in 2016 resulted in legislation permitting Japanese participation in collective self-defense. At the time, there was much speculation that Abe’s security doctrine of proactive pacifism, which sought to recast Japan’s role overseas into one that would take more responsibility for the maintenance of international peace and security, could be tested in the Middle East.

Indeed, in 2015, Abe announced a new, activist Middle East policy. Tokyo was to now play a greater role in shaping the future of the Middle East through engagement on a host of issues ranging from humanitarian assistance and development to security. Abe’s message was thus warmly received in Washington.

It was also clear however that Abe’s policy would be constrained by a traditional Japanese preference for caution. After the U.S. announced the formation of an international coalition to fight the Islamic State in 2015, Abe chose not to provide any military or logistical support to the anti-ISIL campaign. He, did, however, pledge $2.5 billion in regional humanitarian and development assistance, including $200 million in non-military assistance to the effort.

Even with the announcement of a new approach to the Middle East, Abe has pursued the stable relations that Japan has always craved in the region.

Similarly, Japan offered financial and technical support for European Union missions in Niger and Mali, while avoiding the deployment of peacekeepers. Abe wanted to send a strong message that Japan was committed to playing an active role in contributing to regional peace and security without committing any troops.

Even with the announcement of a new approach to the Middle East, Abe has pursued the stable relations that Japan has always craved in the region. In a 2015 speech, Abe emphasized Japan’s special role by drawing an implicit contrast between Japan’s policies toward the Middle East and those of Europe and the United States. The message was that Japan would not take sides or seek to interfere in the region’s interstate conflicts or internal problems.

In the end, Japan will continue to base its policy on ensuring access to stable sources of energy, while Tokyo’s security concerns will focus on its neighborhood, especially North Korea and China.

Since the election of U.S. President Donald Trump, Abe has again recalibrated. In the security realm, Trump’s presidency has brought uncertainty to the U.S.-Japan alliance. As a candidate, Trump suggested that South Korea and Japan should defend themselves. As president, he floated a drawdown of troops in the two countries.

Moreover, Trump shocked the Japanese leadership when he announced a June 2018 summit with North Korean leader Kim Jong-un without input from Tokyo. In the economic realm, Trump removed the United States from the Trans-Pacific Partnership, on which Abe had expended significant political capital domestically owing to the pact’s unpopularity. Finally, despite Japanese lobbying and Abe’s “burgers-and-golf” diplomacy, the Trump administration hit Japan with the same steel tariffs levied in spring 2018 against many other countries.

All of this has made it even more difficult for the United States to secure Japan’s support for U.S. regional priorities for the Middle East. Iran serves as a good example.

Japan’s Relationship with Iran, Before and After Trump

Perhaps no other country in the Middle East has generated more tension between Tokyo and Washington than Iran. Just as U.S. Vice President Mike Pence was excoriating Iran at a summit on Middle East security in Warsaw, Iranian Parliament Speaker Ali Larijani was in Tokyo to meet Abe.

Outreach to Tehran at times of heightened tensions with the United States is not new. Even at the peak of the Iran hostage crisis in 1979-1980, Japan continued to buy Iranian oil on spot markets, an act which drew condemnation from Washington.

What does this mean for Japan’s role in the broader Middle East? As has always been the case, Tokyo will engage in delicate balancing. Abe will not shirk from working to protect Japanese economic interests in Iran. The recent Abe-Larijani meeting may be a sign of this.

Abe may also simply “wait out” the Trump administration, avoiding any high-profile initiatives vis-à-vis Iran that would antagonize the United States. While Japan may be dependent on Middle East oil, it is also dependent on the U.S.-provided security umbrella. Abe may also try to act as an intermediary between Tehran and Washington; his recent meeting with Larijani may signal such a role.

At the same time, Tokyo is highly unlikely to enter into any future U.S.-led regional military deployments that would disrupt delicate relationships with Japan’s regional trading partners. Abe’s government has focused on winding down existing peacekeeping missions in which SDF forces are involved rather than joining new ones.

In the end, Japan will continue to base its policy on ensuring access to stable sources of energy, while Tokyo’s security concerns will focus on its neighborhood, especially North Korea and China.

Mieczysław Boduszyński is a Pacific Council member, an assistant professor of international relations at Pomona College in California, and a former American diplomat with the State Department.

This report was originally published by the Middle East Institute.