It May Be Time to Return U.S. Nukes to the Korean Peninsula 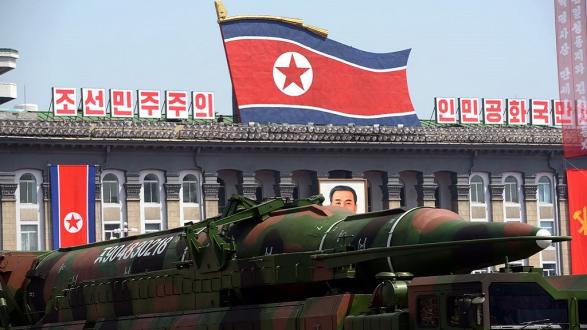 What are Washington and its allies to do about North Korea? In January, Pyongyang tested its fourth nuclear device. It launched a satellite in February to gather additional data for developing an intercontinental ballistic missile. Meanwhile, North Korean engineers keep cranking out weapons material that could fuel dozens of nuclear bombs in years to come.

The international response continues to be ineffective. After much pouting from concerned countries, the United Nations Security Council recently responded to the new round of tests with an impressive new collection of sanctions.

The sanctions promise to halt the movement of contraband by monitoring North Korean commerce moving in and out of the country, prohibit the export of jet and rocket fuel to Pyongyang, block the North’s ability to conduct international financial transactions and ban the export of North Korean coal and minerals. But they are not enough. Even combined with the previous sanctions, this will not move the North off its nuclear pedestal. It is simply too late.

First, it is inconceivable that North Korean leader Kim Jong Un would give up the weapon that places his nation in the exclusive global nuclear club. Pyongyang has invested so much and come so far to mature a nuclear program that provides it with an atomic deterrent and a means of intimidation. Second, history repeatedly shows that sanctions are unlikely to be fully enforced or sufficient to squeeze North Korea.

Pyongyang has invested so much and come so far to mature a nuclear program that provides it with an atomic deterrent and a means of intimidation.

Washington and its allies must now come to the realization that it is time to adapt.

Adaptation has already begun. South Korea has made a multi-year commitment to increase its military budget and modernize its conventional forces. It has begun deploying longer-range surface-to-surface missiles and is acquiring U.S. F-35 strike aircraft. Seoul is talking with Washington about installing the sophisticated missile defense system Terminal High Altitude Area Defense or THAAD. Collectively, beefing up of its conventional forces bolsters Seoul’s deterrence capabilities.

Yet many in South Korea still fear that Seoul’s military buildup will not be enough. Some conservative legislators and others both in and out of government have called for the country to go nuclear. Were that to occur, Seoul would follow the path of several countries — the Soviet Union, Britain, France and Pakistan — that responded in kind to their adversaries’ possession of nuclear weapons.

However, any move by South Korea to break its Nuclear Nonproliferation Treaty vows would pit it against its crucial ally, Washington, which doggedly opposes nuclear proliferation whether by friend or foe.

In addition, nuclear acquisition would present South Korea with its own challenges. Though the country has the technical capacity to build a bomb, it could take years for it to perfect a delivery device and marshal an effective deterrent, or use doctrine. The effort would prove costly because it would divert scarce defense dollars from other vital security needs. It would also raise the ire of China.

Impressing upon North Korea that no good will come from its bomb remains critical. It raises the question of whether more good could come from Washington’s return of nuclear weapons to South Korea — the United States removed them in 1991 as the Cold War ended.

The challenge now is not to bolster quixotic policies but to nurture others that assure Kim’s bomb does not give birth to a 21st-century nuclear war.

Given North Korea’s unabated nuclear development, is it time to reassess that 1991 decision? Re-installing the weapons would raise a host of additional issues: Would deployment enhance deterrence or make Pyongyang more trigger happy? Would it provide Seoul enough reassurance to eliminate any inclination to go nuclear? Or is offshore deployment enough?

Then, there is the matter of Beijing’s response. Would the return of the bomb to South Korean soil prompt a major dustup in Sino-U.S. relations? Or would it demonstrate Washington’s commitment to assure the security of all its East Asian allies?

These open questions deserve robust public debate in the United States and South Korea. But so does another matter, now even more off the radar. Is it time for the United States to reach out to North Korea, to formally concede what it cannot change — namely that North Korea is a nuclear-armed nation — not as any favor to the Stalinist regime but to generate a quid pro quo, the establishment of official liaison offices in the two countries’ capitals? This would put in place a permanent face-to-face communication link to defuse the risk of war should tensions mount.

The alternative — keeping North Korea ever more isolated — perpetuates the fantasy that Pyongyang still can be sanctioned or otherwise induced to give up its nuclear bombs. Rather, the challenge now is not to bolster quixotic policies but to nurture others that assure Kim’s bomb does not give birth to a 21st-century nuclear war.
____________________

Dr. Bennett Ramberg is a Pacific Council member and a nationally recognized expert on nuclear weapons proliferation, terrorism and international politics. He has been a foreign policy analyst and/or consultant to the Department of State (Bureau of Politico-Military Affairs), U.S. Senate, Nuclear Control Institute, Henry Stimson Center, Global Green and Committee to Bridge the Gap.

This article was originally published in Reuters.