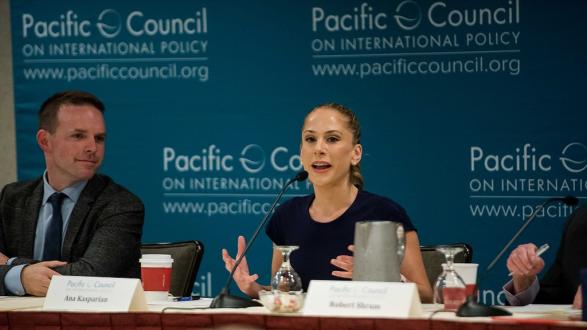 This year’s PolicyWest spanned a full day of panel discussions, TED-style talks, a debate on defense spending, and a keynote panel discussion on Ukraine. Experts from the Young Turks, the U.S. Department of State, the Heritage Foundation, the RAND Corporation, the Atlantic Council, the Cato Institute, the German Marshall Fund of the United States, the Hunt Institute for Global Competitiveness, and many others participated in our signature annual fall conference.

The conference’s breakout sessions included discussions about the politics of American foreign policy, China’s military, economic diplomacy, the internet of things, U.S. policy in the Middle East, and the intersection of Silicon Valley and national security. Below are some highlights from the conference.

In 2020, the U.S. presidential election is due to occur during a time of tremendous international upheaval. Many wonder how Americans will vote as well as what international issues will take center stage. Could it be that global events shape election day results?

A panel featuring Robert Shrum, director of the USC Dornsife Center for the Political Future, and Ana Kasparian, a host and executive producer of the Young Turks, and moderated by Thomas Zimmerman, director of programs at the Pacific Council, discussed foreign policy’s role in American political discussions. They answered the question, “How do international events shape domestic politics?”

“There is a type of economic determinist theory about elections that says it’s all about the economy,” Shrum said. “If the economy is doing fine, then the incumbent party is going to win. Foreign policy is just not that big a deal. I think this is utterly ahistorical.”

"There is a type of economic determinist theory about elections that says if the economy is doing fine, then the incumbent party is going to win. Foreign policy is just not that big a deal. I think this is utterly ahistorical."

He emphasized that there was no question that politics have a huge impact on foreign policy. He cited 1968 as an example, explaining how President Lyndon Johnson irreparably damaged his chance to receive the Democratic presidential nomination through his handling of the Vietnam War, despite winning the biggest victory in terms of the popular vote in history. Many thought that he had become too aggressive and unnecessarily dragged the United States into endless conflict. In later decades, presidents such as Ronald Reagan and Jimmy Carter also had to prove to the American people that they weren’t unnecessarily trigger-happy to win the presidency.

Shrum transitioned into discussing the 2000s, stating that after the fall of the Soviet Union there was a lull in foreign policy issues until 9/11. By 2004, he explained how foreign policy, especially the threat of terrorism, was a decisive issue.

On the politics of U.S. foreign policy today, Shrum stated that the looming question regarding Trump was initially his fitness for office, but as of today, the question has unconventionally merged with foreign policy because of his use of his powers abroad for personal political campaign purposes. 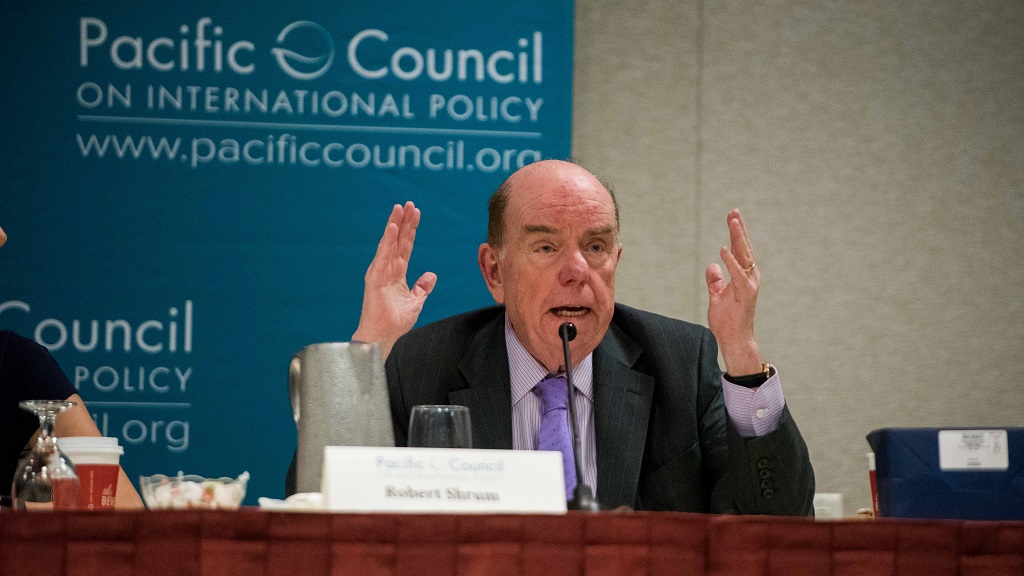 “We are in uncharted territory with an unprecedented president,” he said. “A division between domestic issues and foreign ones may in this election prove to be impossible.”

Kasparian argued that issues heavily covered in the news do not always have the potential to be deciding issues for voters. One example of this, she mentioned, was the assassination of Jamal Khashoggi, a Saudi Arabian dissident, Washington Post columnist, and author, in the Saudi Arabian consulate in Istanbul, Turkey.

“I bring that up because remember that during the 2016 election there was so much anger on the Republican side about the U.S. involvement in Saudi Arabia, which by the way, wasn’t frustration unique to Republicans,” she said. “Democratic voters felt the same way, and so I thought this would force Republicans to have a very important discussion, and I was amazed that Donald Trump was able to sit there and literally say, ‘We are going to continue selling weapons to Saudi Arabia because they help us out economically.’”

Ana Kasparian said she believes U.S. national security is in jeopardy and that American voters are quite tired of interventionist and regime change wars as their leaders continue to underestimate their awareness.

She said the economy does play a role for Americans and that they do care where their dollars go. Many certainly aren’t blind to the fact that large sums of money are spent for military purposes abroad while many Americans still lack decent healthcare and other domestic programs. She posited that this is all interconnected and Americans probably realize that too many resources are going to handle foreign policy issues instead of supporting what is needed at home.

Overall, Kasparian said she believes U.S. national security is in jeopardy and that American voters are quite tired of interventionist and regime change wars as their leaders continue to underestimate their awareness.

This panel featured Derek Grossman, senior defense analyst at the RAND Corporation, and Dr. Patricia Kim, senior China policy analyst at the U.S. Institute of Peace, and was moderated by Katelyn Davidson, operations division officer on the USS Carl Vinson.

In answer to just how much China presents a challenge to U.S. power, influence, and interest or if it was all sensationalized by those in the United States, Kim explained that there has been a huge interest in China’s military power in the last decade because of a renewed focus in Washington on great power competition. Beijing has been open about becoming a world power, and President Xi Jinping wants to turn China into a world-class country with a military to match.

China is far less interested in using all its energy to become the premier military power or world security power like the United States has done in the past. Instead, China seeks to position itself as an indispensable economic power.

According to Kim, China sees economic growth and power as its primary means of rising to the top. It is far less interested in using all its energy to become the premier military power or world security power like the United States has done in the past. Instead, China seeks to position itself as an indispensable economic power to win friends with Chinese leaders pushing hard on the idea that their country is a different type of economic power and that their primary goal is to do business with other nations.

However, Kim reassured the audience about this new, threatening China, and encouraged a closer look at China.

“There is still a need to engage in structural economic reform at home, because growth is slowing down in China,” she said. “Beijing is struggling to exert control over Hong Kong, as you’ve seen play out in the news. In Tibet, Shenyang, and even in places like Shanghai, which is very advanced and people have a pretty good standard of life, there is still deep disgruntlement over issues such as economic inequality and air pollution. And it’s very pervasive at the grassroots level.” 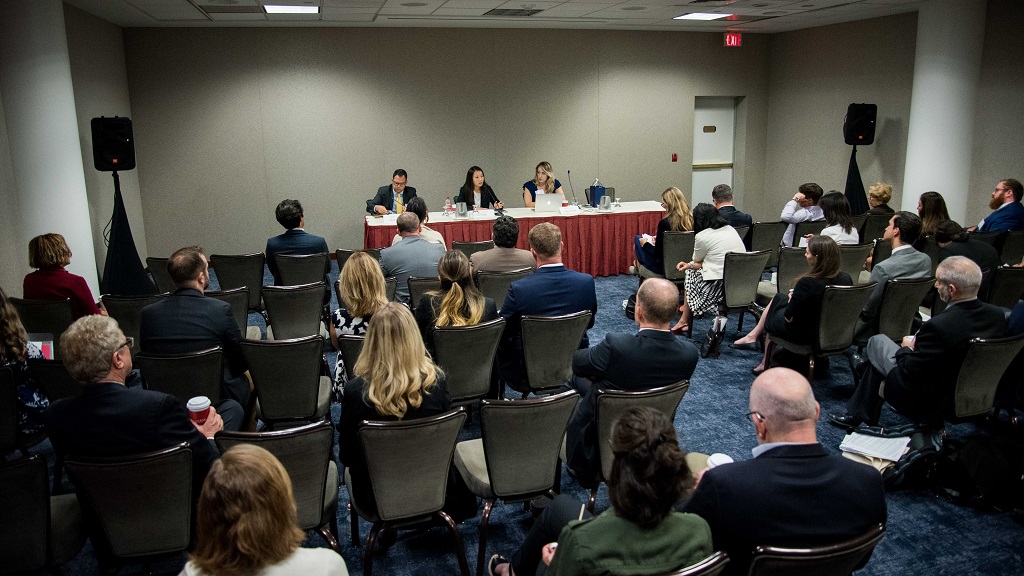 All of these factors, she mentioned, have the potential to blossom into domestic political instability, which the Communist Party wants to prevent. There are still difficult issues to handle that will likely distract Beijing. Additionally, Beijing lacks hard and soft power abroad and has only partnerships instead of formal allies. The United States does have allies and security partnerships, plus military bases all over the world including in East Asia, further marking a power disparity between China and the United States. Kim said the United States should show its allies that it is not enlisting them in a new Cold War and to engage these partners in a comprehensive and sustained way.

Grossman examined the future of China’s People’s Liberation Army (PLA), saying a recent speech made by Xi Jinping to the National People’s Congress was an excellent indicator. In the speech, Jinping mentioned the years 2035 and 2049. 2035 is the proposed date for the modernization of the PLA, and 2049 is the proposed deadline for the PLA to reach world-class status.

Today, the PLA strives to fight and win localized wars in order to attain a level where they are capable of fighting much larger armies. Grossman said China is currently “probably a near-peer in East Asia, at most.”

A rising China marks a potential shift in the world order, prompting concerns in the United States that will only grow in the years to come.

Grossman also pointed out that Xi Jinping “has been cleansing the PLA, which has a corruption problem. Xi apparently has his own dossier on all the dirty dealings that all the different PLA officers have done. And he’s using that to great effect, to get rid of corrupt officers but also political opponents.”

This is one of the constant reminders to the Chinese that Xi possesses almost absolute power and will not tolerate any challenge to his influence. In fact, further adding to his goals for the year 2049, Xi is particularly concerned with outdoing the United States much like the United States worked to gain superiority over the Soviet Union through nuclear capabilities. China’s equivalent would be the use of satellite weapon technology.

A rising China marks a potential shift in the world order, prompting concerns in the United States that will only grow in the years to come.

Learn more about PolicyWest 2019; watch the keynote discussion on Ukraine and TED-style talks on LA and international trade, election security, climate change, and the Fourth Industrial Revolution; and read a summary of the debate on defense spending and cybersecurity discussions. Check out more photos from the conference on our Flickr page.