A Debate on Defense Spending at PolicyWest 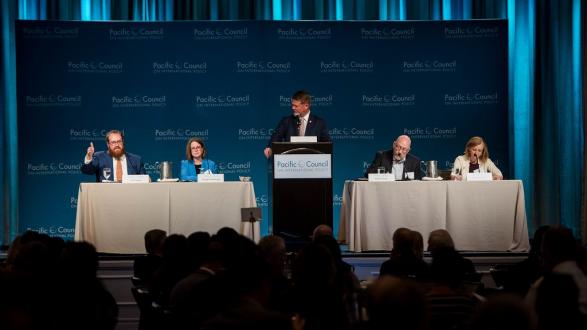 The United States has been at war for almost two decades. The costs have been staggering, and recent concerns include the readiness of the armed forces to fight conventional wars rather than insurgencies. Some lament what they view as out-of-control spending on all things military, while others support these expenses, citing a need to keep forces war-ready in uncertain times.

Within this high-stakes context, four experts at the Pacific Council’s annual conference, PolicyWest, debated the question, “Should the United States spend less on defense?” The panel was moderated by Pacific Council member Aaron Brooks, a consultant who served in the Marines and has a background in intel operations.

The representatives of the side arguing for the motion were Eric Gomez, a policy analyst at the Cato Institute, and Mandy Smithberger, the director of the Center for Defense Reform. The representatives of the side arguing against the motion were Dr. Rebecca Grant, a national security analyst and the founder of IRIS Independent Research, and Dakota Wood, a senior research fellow for defense programs at the Heritage Foundation.

Prior to the debate, 76 percent of Pacific Council members voted “yes” and 24 percent voted “no” in a poll asking if the United States should spend less on defense.

Prior to the debate, 76 percent of Pacific Council members voted “yes” and 24 percent voted “no” in a poll asking if the United States should spend less on defense. To win, a side would need to gain additional percentage points once the vote was taken again at the end of the debate.

In his opening statement, Gomez argued that the military today focuses on much more than a military would have typically in the past, taking on jobs that were primarily carried out by civilians and self-fulfilling a prophecy of ineffectualness because the military is not best equipped for handling nonmilitary diplomacy tasks. 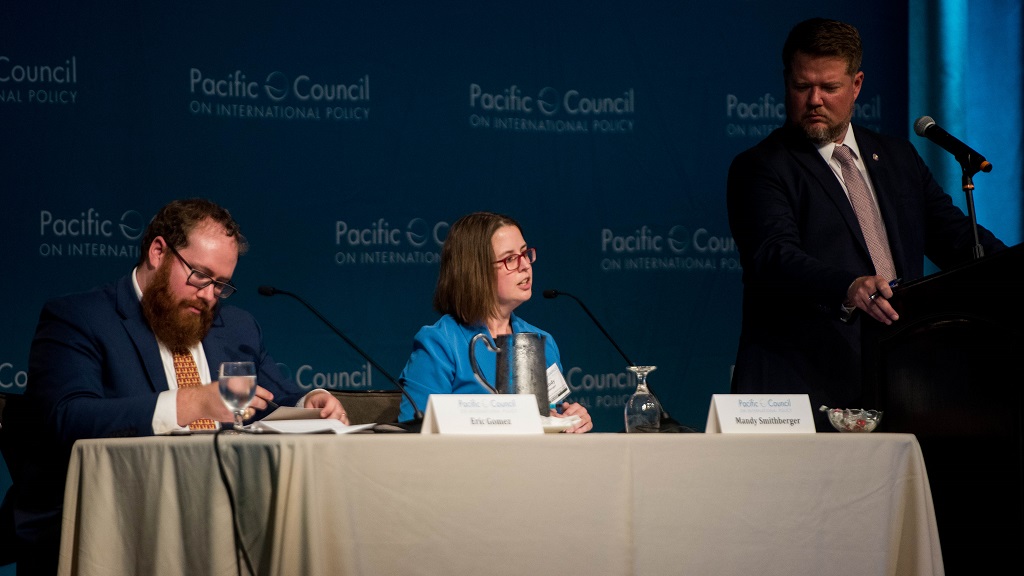 “While the impulse to increase defense spending might seem very natural at this juncture that we’re in, I don’t think it’s going to bring the types of benefits that we want writ large,” he said. “And that’s because the U.S. military is a very blunt instrument. And while it is very good for doing certain things, often it is not the right tool for the types of foreign policy jobs or foreign policy challenges that we face.”

Gomez argued the United States would do better to shift its broad-spectrum approach all over the world as certain regions are simply not as significant to U.S. military and strategic interests. He explained that cutting defense spending could be an effective way of refocusing military efforts and investing only in what is justifiably needed.

"The U.S. military is a very blunt instrument. And while it is very good for doing certain things, often it is not the right tool for the types of foreign policy jobs or foreign policy challenges that we face."

Grant countered Gomez’s arguments, stating that the United States has the single most powerful and best military in the world for all of history and that Americans should think of the military in this light when judging whether it is worthy of preservation at the current spending level. She argued that current U.S. policy has sustained investment to meet real challenges in China and Russia and that military funding also supports things that are not often thought of, such as compensating servicewomen and men, protecting space capabilities from China and Russia, and improving command control of nuclear weapons systems.

“My colleague would have you believe that our military is a blunt instrument but I would say in fact, it is not,” she said. “It is a sharp and precise instrument, one that we can use for humanitarian assistance and disaster relief across the Pacific. It’s one that we can use against strikes of chemical weapons in Syria, and it’s one we can use to deter great power conflict.”

"The U.S. military is a sharp and precise instrument, one that we can use for humanitarian assistance and disaster relief across the Pacific."

Smithberger delved into the effects of military spending and its effect on domestic spending and the wants and needs of the American people. She mentioned that the issue should not be perceived as a zero-sum issue and that Americans want more spending at home, which she said is a reasonable ask provided that a dramatic increase in the defense budget would not be the most effective method of increasing the Pentagon’s efficacy. Smithberger mentioned that improvements to the Defense Department and military spending should include reform and transparent reporting of the department’s expenses.

“We need to have real reform occurring at the Department of Defense and how they buy things and how they encourage innovation, how they partner with others,” she said. “You’re not going to get that kind of real reform as long as they know that they have a blank check, which is the environment that we’ve had for a long period of time."

She also pointed out that her colleagues asserted how they would spend U.S. funds, but not that it would be spent well. She argued that focusing primarily on the Defense Department is unnecessarily expensive and compared current defense spending to the past: the United States is currently spending more than it did during the Korean and Vietnam wars without providing any proof that Americans are getting their money’s worth and or that there is a positive effect on men and women in uniform.

"We need to have real reform occurring at the Department of Defense. You’re not going to get that kind of real reform as long as they know that they have a blank check."

“What we spend on the Defense Department needs important context,” Wood said. “Military power, ships, airplanes, tanks, etc., aren’t meant to solve education crises or global warming crises or diplomatic snafus. You have a military for a reason and that is to defeat the efforts by a competitor country to take something, to see something, to deny you access.”

He also emphasized the importance of having a military relevant to its time. Time, he said, is an important element because if the United States were to find itself in the situation where it had cut military spending and had an army that was half the size it needed come wartime, it simply wouldn’t be able to build itself up in time. 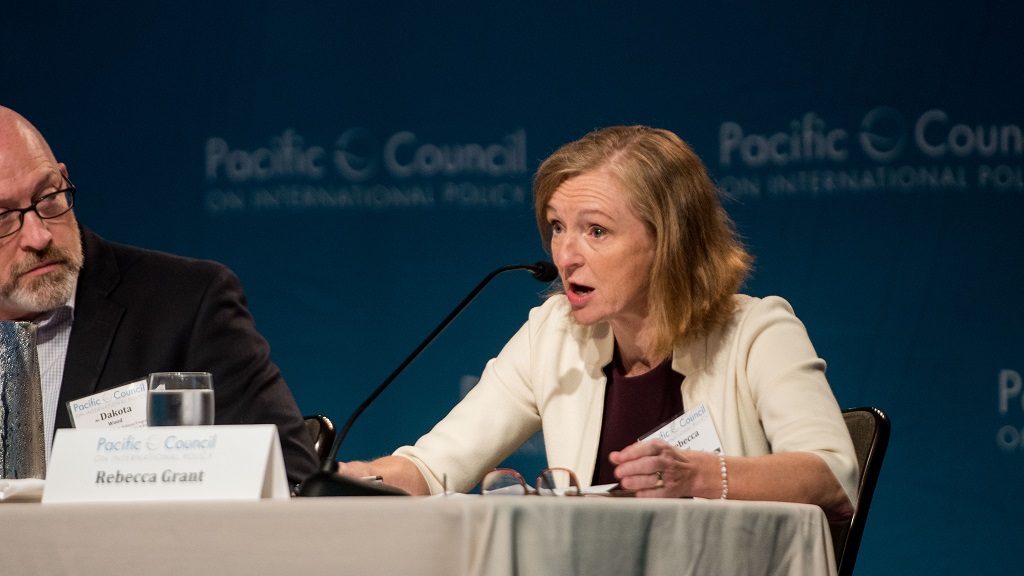 He argued that when thinking of defense spending, it would be wise to think about the nature of the current world, the United States’ interests in the world in terms of economics, diplomacy, and values, and what it would take to protect them all. He agreed with Grant’s argument that it would be unwise to constrain the budget to a point at which the military would be unable to carry out necessary tasks when called upon.

Neither Grant nor Wood touched on the effect military funding would have on domestic policy, however Wood did mention that possessing military spending power does not signify a lack of concern for other issues, but rather that the government is working on a key area. The United States, he continued, is a global entity and it has a responsibility to support its friends and allies which involves the military. In any case, he mentioned, the army is smaller now than before.

"What we spend on the Defense Department needs important context. You have a military for a reason and that is to defeat the efforts by a competitor country to take something, to see something, to deny you access."

In conclusion to the debate, Gomez warned that if European, NATO, East Asian, and Japanese allies truly mattered to the United States, then all four should be receiving the primary focus of the military’s international aid and protection instead of creating unnecessary and dangerous situations in regions like the Middle East and Ukraine.

Grant and Wood took the chance to reiterate that the military is an investment that cannot be arbitrarily cut and added to if the United States is to have an optimal military. They argued that effective spending is the kind of spending that allows the United States to be ready for war at any moment.

Following the debate, the side arguing “no” gained 11 percentage points, bringing their total from 24 to 35 percent.

Smithberger again emphasized the need to examine how decreasing military spending could increase its effectiveness, reiterating issues such as ineffective military technologies that were never employed and the use of the armed forces to carry out tasks typically carried out by trained civilians.

Following the debate, Pacific Council members again voted in a poll asking if the United States should spend less on defense. The side arguing “no” gained 11 percentage points, bringing their total from 24 to 35 percent, while the side arguing “yes” decreased from 76 to 65 percent.

Learn more about PolicyWest 2019, and watch the keynote discussion on Ukraine here and TED-style talks on LA and international trade, election security, climate change, and the Fourth Industrial Revolution here. Read about cybersecurity discussions and more insights from PolicyWest 2019 here. Check out more photos from the conference on our Flickr page.