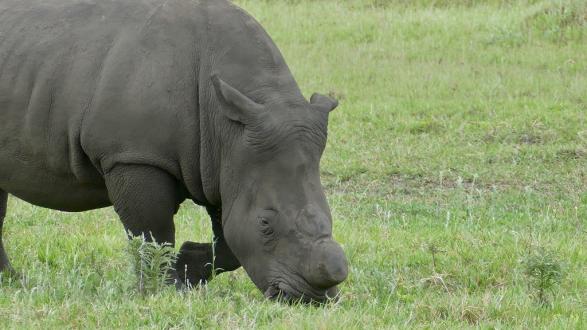 Kathi Lynn Austin has been working to uncover and bring to justice the transnational criminal organizations (TCOs) that orchestrate international arms deals and illegal wildlife poaching in sub-Saharan Africa.

Austin's organization, Conflict Awareness Project, published a 2019 report, Follow the Guns: An Overlooked Key to Combat Rhino Poaching and Wildlife Crime, which explains how her unique approach to “follow the guns” (instead of just the money or individuals involved in the crimes) has been effective in stopping the TCOs and even the production of specific rhino poaching weapons. Her approach uses forensic evidence such as the serial numbers on guns found where rhinos are killed to track down the original producer and arms traders.

Austin and her team found these rifles were made in the Czech Republic for American markets but diverted to Africa for use by rhino poachers.

Many of the poachers who commit the actual poaching crime live in destitute conditions and are sponsored by corrupt governments to kill rhinos for their extremely valuable horns. Taking down a rhino requires a specific type of gun—CZ rifles—manufactured in the Czech Republic. Austin and her team found these rifles were made for American markets but diverted to Africa, specifically South Africa and Mozambique, which border Kruger National Park, for use by rhino poachers.

Most of the international gun deals are negotiated at major gun shows in Las Vegas, Nevada. Law enforcement, both local and international, were involved in Austin’s investigation due to the large national security threat posed by such gun sales. If these weapons aren’t being used to illegally kill endangered species, they are trafficked to terrorist networks, and deals help to fund TCOs, which pose a national security threat to the United States, Europe, and the world over.

Austin, who is a Pacific Council member, spoke with other members at Mikkeller DTLA on Thursday, December 5, 2019. You can listen to the audio from the event below, and access the Conflict Awareness Project’s report at their website by following this link.