How Can We Protect Our Elections from Foreign Influence? 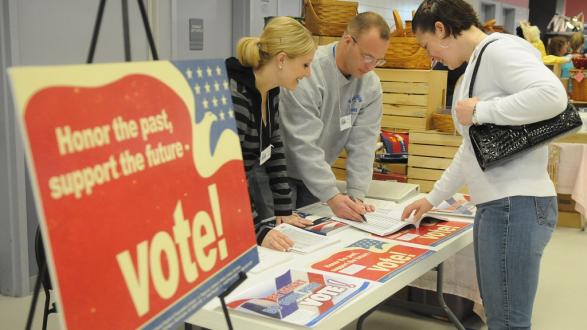 Even in this hyper-polarized moment in American politics, we should all be able agree that foreign actors should not be allowed to interfere in our elections. There is bipartisan consensus that interference is occurring and that it will continue until we act. Unfortunately, that consensus does not extend to what, if anything, we should do about it.

On Tuesday, Senator Mike Crapo blocked bipartisan legislation that would require sanctions on any nation found to have interfered in our federal elections, claiming the bill was “anti-Trump.”

We are less than a year from the 2020 presidential election and time is running out.

When we talk about election security, it’s important to remember that we are looking at two separate but related issues. First, there’s the issues of ensuring the integrity of our voting systems, so the American public can have confidence that election outcomes reflect the will of the voters. Last July, the Senate Intelligence Committee reported that in 2016, Russian intelligence targeted election systems in all 50 states. While the bipartisan report found no evidence of any votes being altered once cast, it warned that Moscow has invested in an effort to identify vulnerabilities in our voting systems and that many of those vulnerabilities remain intact.

The House of Representatives has passed several election security bills aimed at addressing both challenges, but legislation has been blocked in the Senate and President Trump has threatened to veto them.

Secondly, there are efforts by foreign governments to influence the American political process through campaigns of online propaganda, disinformation, and suppression. While much reporting has been done on Russia’s efforts to influence the 2016 presidential race, their success has inspired other actors from Tehran to Beijing. China has been seeking to shape the conversation online for years and their brazenness only continues to grow.

The House of Representatives has passed several election security bills aimed at addressing both challenges, but legislation has been blocked in the Senate and President Trump has threatened to veto them. The first of these bills, the SAFE Act, would provide states with $600 million to enhance voting security measures, ban states from using voting machines connected to the internet, mandate cybersecurity improvements, require voting machines be manufactured in the United States, and require backup paper ballots.

The second, the SHIELD Act, would require campaigns to report any offers of assistance from foreign governments to the FBI, forbid campaigns from sharing information with foreign agents, and apply the rules in place for political advertisements on television and radio to online advertisements. Republican leadership has responded by raising concerns to both about infringements on free speech and federal overreach. While some of these concerns are legitimate, others are not.

Paper ballots are not the end-all solution and have their own share of challenges. But ensuring an auditable paper trail can give voters greater confidence that their votes are counted as they intended.

In June, Senator Marsha Blackburn of Tennessee blocked an effort to introduce a parallel bill in the Senate, claiming  the requirements were “overboard” and suggested that campaigns would have to file a report every time one of their canvassers knocks on the door of a non-citizen. This is nonsense. The biggest hurdle to meaningful election security legislation today is a White House that views congressional efforts to secure the 2020 election as a challenge to the credibility of the president’s 2016 win.

On the first challenge, there’s no question our nation’s election infrastructure is vulnerable and the solutions shouldn’t be politically divisive. In November 2018, it was estimated that 34 percent of election jurisdictions were using voting machines that are at least a decade old (in 41 states), beyond when they should have been replaced. Forty-five states currently use voting equipment that is no longer manufactured and many of these systems are running on software so old that security patches are no longer produced. Eleven states primarily use voting machines that leave no paper record of votes recorded, including Pennsylvania, South Carolina, and Georgia.

Paper ballots are not the end-all solution and have their own share of challenges (Hello there Miami-Dade!) and there are real benefits to electronic voting systems. They are often easier to understand and can make voting more accessible for those with disabilities. Never-the-less, there have already been instances of electronic voting systems failing in ways that dramatically skewed the electoral outcome and the Senate Intelligence Committee has emphasized the exploitation target these systems present to foreign adversaries. Ensuring an auditable paper trail can give voters greater confidence that their votes are counted as they intended.

Our foreign adversaries learned a great deal from the 2016 election. The question now is: Have we?

Significant progress is being made in California. In February 2019, Secretary of State Alex Padilla announced that all 58 counties would be required to purchase voting systems to meet updated standards before the March 3, 2020, primary or face penalties. These requirements include a mandatory voter-verifiable paper trail and forbid voting and tabulation machines from connecting to the internet.

These upgrades are expensive, but necessary and the state’s 2018 budget provided $134.3 million to support these efforts. Los Angeles County’s upgrades, a decade in the making, are getting particular attention due its use of open-source technology. The sheer number of voters (LA County has more registered voters than 42 states) means the stakes are particularly high.

While each state sets its own election laws, the integrity of our elections is a national security issue. In 2018, Congress appropriated $380 million for cybersecurity grants to the states, but it won’t be enough to cover the cost of overdue election infrastructure upgrades and more is needed. With the 2020 primary less than three months away, California is making important investments, but there is still much work to be done and the reality is that voting systems are expensive. Many state and local governments lack the resources necessary to make much needed upgrades and federal government support will be necessary.

Our foreign adversaries learned a great deal from the 2016 election. The question now is: Have we?

Thomas Zimmerman is the Director of Programs at the Pacific Council.