The Great Game Over the Arctic
Global Water Scarcity 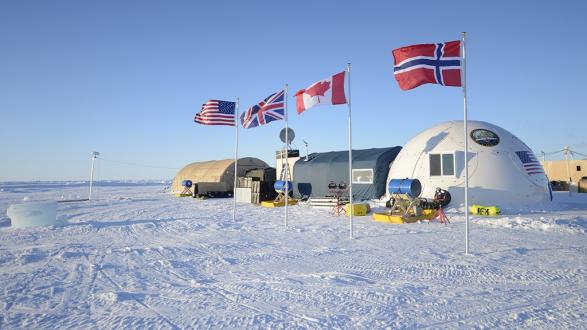 The Arctic Ocean served as a theatre of military and diplomatic maneuvers last August, both terrifying and surreal, ranging from a failed Russian nuclear missile launch to U.S. President Trump’s desire to purchase Greenland.

While not necessarily linked, these events constitute a prelude to a geopolitical contest, a Great Game for the Arctic Ocean as its ice sheets melt due to climate change, an example of “Global Warring.”

From a geopolitical perspective, the recent events are not only part of Moscow’s posturing over the Arctic, but an attempt to project power over waterways from the North Pole to the Baltic Sea, from Ukraine, Crimea, and the Black Sea to the Caspian, and ultimately Syria and the eastern Mediterranean.

In late August Russia ostensibly launched missiles from the Arctic Ocean to send a message to Washington, as that is the shortest path of a nuclear weapon to reach the United States.

The precedent was set a few years ago when Russia sought to demonstrate the far reach of its missile to the European members of NATO but using Syrian skies to make the point.

From fall 2015 to summer 2016, Russia fired its long-range Kalibr cruise missiles from naval vessels in the Caspian towards Daesh targets in Syria. Russian planes stationed in Syria would have been more accurate and effective in targeting Daesh, not to mention cheaper than using costly cruise missiles. However, an air raid would not have delivered the same political message.

The range of the cruise missiles demonstrated to the United States and NATO the advances in Russian military technology, more related to Moscow’s posturing over Syria, but also over Ukraine and NATO’s presence in the Baltic states and the Arctic.

The Arctic Ocean served as a theatre of military and diplomatic maneuvers last August, both terrifying and surreal, ranging from a failed Russian nuclear missile launch to U.S. President Trump’s desire to purchase Greenland.

The most recent round of brinkmanship diplomacy over America’s and Russia’s nuclear missile arsenal can be traced back to February 2018, when the U.S. Department of Defense released a new nuclear arms policy, implementing Trump’s promise to develop an arsenal “so strong and powerful that it will deter any acts of aggression.”

Just two weeks later, on March 1, President Vladimir Putin delivered the annual state of the nation address, most of it focused on a carefully calibrated message that promised new advances in Russian missile technology, with even CGI video footage showing a hypersonic missile approaching Florida.

After this spectacle, the onus was on Putin to make these missiles a reality, which he attempted in early August of this year. However, Russia suffered a setback due to an accident involving a nuclear-powered cruise missile he referred to during his speech. Nonetheless, the disaster was then followed up by the successful firing of two ballistic missiles from two submarines in the Arctic in late August.

Ben Hodges, former Commanding General of U.S. Army forces in Europe, projected that in a future conflict scenario with Russia, NATO forces could deny Russian naval access through these chokepoints, essentially trapping the Russian navy in both seas.

The latter Arctic launches occurred after the United States had fired a ground-based cruise missile from an island off the coast of California, an indication that America had formally withdrawn from the Intermediate-Range Nuclear Forces Treaty (INF), signed in 1987 as part of the de-escalation of the Cold War.

The August launches served as the culmination of a pattern of both Trump and Putin launching and testing cruise and ballistic missiles to send symbolic political messages to the other, a form of “missile diplomacy.” This missile diplomacy, unfortunately, led to the unravelling of the INF, a diplomatic coup that had averted an accidental nuclear war during the Cold War.

From the Mediterranean to the Arctic

The fact that the launches occurred in the Arctic serves as a reminder of the role that geography plays in Russia’s geopolitical outlook.

While the United States faces wide open seas on both the Pacific and Atlantic to project its naval power, Russia’s navy is hemmed in by narrow straits.

To reach the Atlantic, the Russian naval fleet has to depart from the Baltic Sea, then through the Danish Straits chokepoint.

To reach the Mediterranean from Crimea, Russia has to navigate two chokepoints at the Bosphorus and the Dardanelles Straits.

During a security conference in Tbilisi I attended last week, Ben Hodges, former Commanding General of U.S. Army forces in Europe, projected that in a future conflict scenario with Russia, NATO forces could deny Russian naval access through these chokepoints, essentially trapping the Russian navy in both seas. Of course, in this scenario, he did not mention whether Turkey would agree to such a plan.

Climate change offers Russia an opportunity to navigate the Arctic through a northeast passage, but this will not translate into open seas for Moscow immediately.

Examining Russian geographic constraints from Moscow’s perspective demonstrates how even events in the Arctic are indirectly linked to the Turkish straits. Hodges concluded that based on these vulnerabilities, Russia would have an incentive to weaponise the Arctic.

Climate change offers Russia an opportunity to navigate the Arctic through a northeast passage, but this will not translate into open seas for Moscow immediately. The open lanes are still constricted by the remaining ice sheets and resulting icebergs. Theoretically, its vessels could navigate this passage on the roof of the world, however, to reach the Pacific it would have to navigate another chokepoint at the Bering Strait across from Alaska.

Both Putin and the Trump administration seek to reap benefits from climate change. Russia would be able to not only deploy naval vessels in the Arctic but exploit energy and mineral resources. The Arctic contains an estimated 20-25 percent of untapped global oil and gas reserves. Trump’s interest in Greenland was most likely also a result of seeking to exploit mineral resources as the island’s ice sheets recedes.

The mysterious accident surrounding the nuclear-powered cruise missile and possible contamination from radiation in its environs also harken back to a Soviet legacy. The Russian government’s attempt to keep the extent of the damage hidden invoked dark memories of the Chernobyl or the Kursk submarine disasters, recently coming to public attention as a result of recent docudramas and films.

While Moscow and Washington continue to play a nuclear duel, and spar over the Arctic, it is the global environment that has and will suffer as a result.

A failed missile test leaving a toxic legacy also serves as a reminder to the damage that today’s Kazakhstan endured. As of 1949, the USSR conducted more than 450 nuclear tests at the secret Semipalatinsk site over 40 years, in the vicinity of civilians whose health suffered as a result.

Thus, while Moscow and Washington continue to play a nuclear duel, and spar over the Arctic, it is the global environment that has and will suffer as a result.