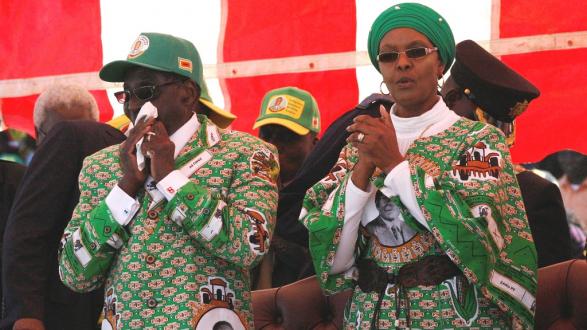 This week, Zimbabwe’s military take President Robert Mugabe into custody during an attempted coup; China and ASEAN agree to begin talks on the South China Sea; the fifth round of NAFTA negotiations begin in Mexico City; and more.

The fifth round of NAFTA negotiations started in Mexico City Wednesday amidst growing concern over President Trump’s threats to majorly renegotiate or completely withdraw from the trade agreement following his "America First" talk in Vietnam last week. The United States has been pressuring Canada and Mexico to accept new rules of origin, a five-year termination clause, and the elimination of an internal dispute mechanism. Mexico’s Foreign Affairs Secretary Luis Videgaray said on Monday that his government was preparing for the possibility of a future without NAFTA, shifting focus to diversifying trade and protecting foreign investment. Nearly 80 percent of Mexico’s exports are currently shipped to the United States.

Myanmar’s army has cleared itself of all allegations of atrocities against the Rohingya Muslims in the Rakhine State, days after a senior UN official accused the government of committing crimes against humanity and prior to U.S. Secretary of State Rex Tillerson’s visit to the country. Since August, more than half a million Rohingya have fled from Myanmar into neighboring Bangladesh, telling of systematic rape and murder by security forces. The investigation concluded that Rohingya militant group Arakan Rohingya Salvation Army (ARSA), also referred to as "Bengali terrorists," was responsible for the violence and that refugees made up allegations of ethnic cleansing upon the media’s arrival, claims that human rights group Amnesty International has called an effort "to sweep serious violations against the Rohingya under the carpet." Tillerson is expected to pressure Myanmar to stop the violence and stabilize the country.

China has agreed to begin talks with the Association of Southeast Asian Nations (ASEAN) regarding guidelines for the South China Sea after meeting in Manila at the 12th East Asia Summit Monday. For 15 years, disputing claims to the South China Sea have complicated relations between China and members of the ASEAN bloc, including Malaysia, the Philippines, Vietnam, and Brunei. Chinese Premier Li Keqiang argued that as the largest country in the South China Sea, China has the most interest in safeguarding its peace and stability. The group resolved to draw up a code of conduct governing actions in the South China Sea starting early 2018, though it was unable to decide on whether the agreement should be legally binding. More than $3 trillion worth of goods passes through the disputed waters every year.

The company behind Russian media outlet RT registered as a foreign agent Monday following pressure from the U.S. Justice Department, which had set a November 13 registration deadline. In response, Russian lawmakers introduced legal amendments Tuesday that would allow the Russian government to compel international media outlets to register as foreign agents. The law would require foreign agent organizations to publicly disclose their status, report on their activities, and submit to financial inspections, requirements that already apply to foreign NGOs in the country. The amendments would also give the state the power to ban non-compliant organizations from working in Russia. Russian lawmakers argue that the law’s application will be "applied strictly quid pro quo" in response to U.S. action.

Saad Hariri, the Lebanese prime minister who abruptly resigned two weeks ago during a visit to Saudi Arabia citing an assassination plot, has said he will be returning to Lebanon in a couple of days. Observers had speculated that Hariri was being held in Riyadh against his will, and his absence has plunged Lebanon into uncertainty and stoked tensions between Iran and the Arab Gulf states. In his resignation statement, Hariri accused Hezbollah and Iran of provoking conflict in the Arab world, though some suspect he could rescind his resignation if Hezbollah would agree to stay out of regional conflicts. Lebanese political analyst Kamel Wazne called Hariri’s resignation a "surprise coup" resulting from Saudi pressure, warning that it "does not bode very well for the stability of Lebanon."

The InsuResilience Global Partnership, a global initiative intended to provide climate risk insurance to hundreds of millions of people by 2020, was launched Wednesday at the UN Climate Change Conference (COP23) in Bonn, Germany. The Global Partnership will bring together G20 countries with V20 countries, the countries that are most vulnerable to climate change, including small islands like Fiji, which is presiding over COP23. A Climate Vulnerability Assessment conducted for Fiji by the World Bank predicts that Fiji’s development costs for the next decade could amount to almost $10 billion, in part because of the challenges posed by climate change.

After what appeared to be an attempted coup, Zimbabwean President Robert Mugabe and his family were put under house arrest Wednesday. In Harare, several tanks were stationed at government buildings and intersections. The ruling political party ZANU-PF and the military insist there was no coup, but it appears that the 93-year-old president’s nearly four decades of power have come to an end. The move was in response to Mugabe’s firing last week of Vice President Emmerson Mnangagwa, clearing the way for Mugabe’s politically ambitious wife Grace, 51, to succeed him. On Tuesday, ZANU-PF tweeted, "Last night the first family was detained and are safe, both for the constitution and the sanity of the nation this was necessary. Neither Zimbabwe nor ZANU are owned by Mugabe and his wife. Today begins a fresh new era and comrade Mnangagwa will help us achieve a better Zimbabwe." Mugabe's fate is now in the hands of former allies and opposition leaders.