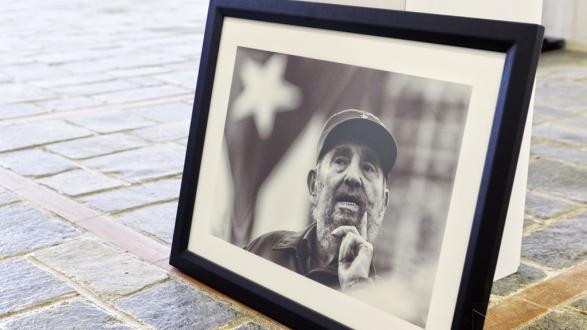 This week, the world reacts to the death of Cuba’s Fidel Castro; Zimbabwe releases a new currency; a conservative hard-liner emerges as France’s possible next president; and more.
____________________

Fidel Castro, leader of the Cuban Revolution who ruled the island nation for 47 years, died on November 25 at age 90. His body was cremated and driven three days over 550 miles to Santiago, retracing in reverse the route he took to Havana to overthrow Fulgencio Batista’s government in 1959. Castro’s brother Raúl took over the presidency in 2008 due to the former’s failing health. In Cuba and around the world, supporters mourned Castro’s death and critics celebrated it.

On Monday, Afghanistan and Turkmenistan opened a new railway connecting the two countries for the first time. The goal of the $2 billion project is to boost trade and make it easier to export Turkmenistan’s oil and energy resources. The railway will eventually connect landlocked Central Asia to China and Southeast Asia.

Embattled South Korean President Park Geun-hye offered to resign before her term ends over an influence-peddling scandal, if lawmakers demand it. Opposition parties rejected her offer, calling it a stalling tactic, and vowed to push ahead to try to impeach her. Opposition parties hold a total of 172 seats in the 300-member parliament, but two-thirds of parliament is needed to impeach her.

François Fillon emerged this week as the most likely next president of France when the country votes next April and May. Fillon is a conservative politician with hard-line views on Muslims, immigrants, labor unions, and taxes. He vowed to “conquer Islamic totalitarianism,” clamp down on mass immigration, and calls for a closer relationship with Russia.

More than 50,000 people fled eastern Aleppo this week as the Syrian government gained control of rebel-held neighborhoods. Shelling killed 26 people who were trying to flee. Senior UN officials appealed to the Security Council to “do everything in their power to protect civilians and enable aid access to the besieged parts of the [war-battered city] before it becomes one giant graveyard.” Meanwhile, Russian Deputy Foreign Minister Mikhail Bogdanov said Moscow has been in contact over Syria with President-elect Donald Trump’s transition team.

Vietnam is taking a long-term, hard line toward China over their territorial disputes in the South China Sea. Voice of America reported this week that Hanoi is extending a military runway and building new hangars on one of the Spratly Islands. Vietnam is also accepting maritime patrol boats from Japan and $18 million in military aid from the United States.

Zimbabwe launched a new currency this week in a last ditch effort to inject desperately needed cash into its failing economy. Critics say the new bond notes will wipe out savings and unleash hyperinflation. Some vendors are already refusing to accept the new currency at face value. On Wednesday, police used water cannons and tear gas to disperse demonstrators who were protesting the new currency in Harare.