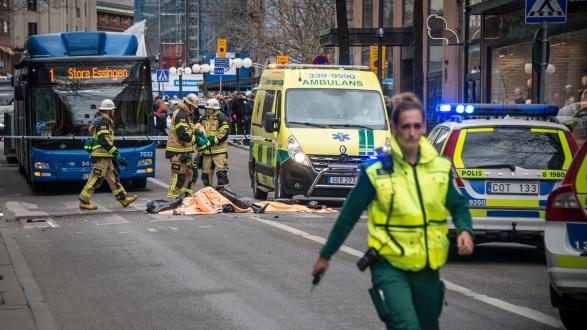 This week, the terror attack in New York draws attention to the spread of ISIL and the growth of religious extremism in central Asia; New Zealand announces visa proposal for climate refugees; South Korea and China resume normal relations after yearlong THAAD tension; and more.

U.S. Special Counsel Robert Mueller announced charges against three of President Trump’s former campaign aides on Monday in the latest development in the probe into whether the Trump campaign coordinated with Russia to influence the 2016 presidential election. Former Trump campaign manager Paul Manafort and his aide Rick Gates were indicted on 12 counts, including money laundering, making false statements, tax evasion, and conspiracy against the United States, and pleaded not guilty on all charges. George Papadopoulous, former foreign policy advisor to the Trump campaign, pleaded guilty to making false statements to FBI agents and is cooperating with the investigation.

Tuesday’s terror attack in Manhattan, which killed eight people and injured 11, is drawing attention to the spread of ISIL and the growth of religious extremism in central Asia. The main suspect, Sayfullo Saipov, is from Uzbekistan, a predominantly Muslim, former Soviet republic. Uzbekistan is not listed in President Trump’s latest travel ban, though Uzbek nationals were responsible for multiple terror attacks in Europe this year, including a truck hijacking in Stockholm, a shooting spree in Istanbul, and a subway explosion in St. Petersburg. A source was quoted as saying that Saipov started studying religion after emigrating from Uzbekistan and "couldn’t get enough" of the religious freedom in the United States, a drastic change from his home country, where an authoritarian government has targeted the Muslim population.

South Korea and China announced Tuesday that they would resume normal relations following a yearlong standoff over Seoul’s installation of the U.S.-owned Terminal High Altitude Area Defense (THAAD) missile system. Beijing saw THAAD as the United States’ latest attempt to undercut its national security and encroach on its territory, and had insisted that it be removed. In response to Seoul’s refusal, China instituted a boycott of South Korean consumer goods which knocked South Korea’s GDP down 0.4 percentage points this year. The announcement comes in anticipation of the Asia-Pacific Economic Cooperation Summit next week.

Andrej Babiš, billionaire leader of the Czech ANO party, has been tasked with building a minority government after winning an endorsement from President Milos Zeman and 78 out of 200 seats in the October 20-21 parliamentary elections. Babiš has three weeks to negotiate a coalition with eight other parties, who so far have refused to work with him over concern about fraud allegations. A new house speaker must be elected before Babiš can be appointed prime minister, a process that could be manipulated to stall Babiš’s transition to government and might result in a gridlocked parliament and a provisional budget.

Representatives from Iran, Russia, and Turkey met this week in Astana, Khazahkstan, for the 7th round of talks on the war in Syria. Kazakh Foreign Minister Khairat Abdul Rahman read the final communique issued by the group, which stressed the need for a peaceful resolution to the conflict and the importance of countering terrorism in the de-escalation zones controlled by Iran, Russia, and Turkey. Further talks are scheduled in Sochi and Geneva later this month, though the Syrian opposition’s announcement that it will forego Moscow’s "congress of Syrian national dialogue," as well as Turkey’s opposition to the Syrian Kurds’ invitation, have complicated the process.

South Sudan President Salva Kiir Mayardit met with his Sudanese counterpart Omar al-Bashir in Khartoum Wednesday to discuss the war in South Sudan, border disputes, and joint security issues. South Sudan gained independence from Sudan in 2011 and has since been embroiled in war, in what constitutes the longest-conflict in African history. Border skirmishes and accusations that either side was supporting rebel movements had previously stymied productive dialogue between the two nations.