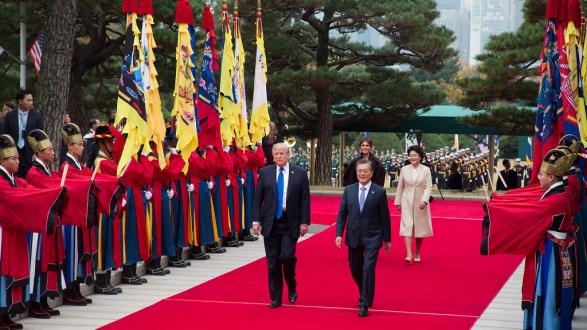 This week, President Trump visits Asia on his fourth foreign trip; 17 Saudi princes and officials are arrested in corruption sweep; COP23 climate conference kicks off in Germany; and more.

The White House announced new restrictions this week aimed at curbing U.S. businesses and Americans from working with and traveling to Cuba. The new regulations, which took effect Thursday, are "intended to steer economic activity away from the Cuban military, intelligence, and security services," according to a senior White House official. U.S. citizens traveling to Cuba will again be required to be part of a group approved by the Treasury Department, and will not be allowed to patronize a list of hotels, restaurants, stores, and other enterprises that the State Department sees as benefiting the Cuban government. Another official said the restrictions are not related to the acoustic attacks that have injured at least 24 Americans in Havana over the past year.

The air in the Indian capital of New Delhi has become so polluted this week that officials have declared a health emergency. The toxic cloud has delayed flights and trains, closed schools, caused auto accidents, and given people coughs and headaches. The pollution levels have reached nearly 30 times what the World Health Organization considers safe, with doctors saying breathing New Delhi’s smog is the equivalent of smoking 50 cigarettes a day. New Delhi’s Chief Minister Arvind Kejriwal tweeted that the city "has become a gas chamber."

President Trump arrived in Asia this week to begin a 13-day trip to visit Japan, South Korea, China, Vietnam, and the Philippines and discuss issue such as trade and North Korea. Trump started the trip with a stop in Japan, where he met with Prime Minister Shinzō Abe for talks over golf and dinner. On Tuesday, he met with South Korean President Moon Jae-in to discuss strategies to deescalate tensions with Pyongyang, taking a decidedly more diplomatic tone from his earlier threats of "fire and fury" and urging China and Russia to encourage denuclearization. The administration’s repeated references to the region as "Indo-Pacific" rather than "Asia-Pacific" ahead of the president’s departure have signaled a shift away from China and toward India and could have huge implications for the U.S.-China relationship.

The 23rd annual Conference of the Parties (COP) climate conference kicked off Monday in Bonn, Germany. The conference consists of a series of discussions on how to implement the Paris Accord on climate change and halt global warming. The United States’ withdrawal from the agreement has resulted in a power vacuum at the conference that countries such as India and China are looking to fill with proposals ranging from carbon cap emissions programs to large-scale solar power projects. For the first time, the United States did not set up a pavilion at the summit, but an independent group of U.S. politicians and business from the "We Are Still In" coalition are attending to discuss American efforts to combat climate change.

A helicopter carrying several Saudi officials, including Prince Mansour bin Muqrin, crashed near the country’s border with Yemen on Sunday, killing all aboard. That weekend, 17 Saudi princes and officials were also arrested on corruption charges in what observers are calling King Salman and the crown prince’s first attempt at an "anti-corruption" sweep. After that move, the country claimed that Lebanon had declared war on them through Hezbollah and that Iran’s sale of missiles to Houthi rebels in Yemen constituted "direct military aggression." Since the intercepted missile attack on Riyadh, Saudi Arabia has closed all land, air, and sea access points to Yemen.

The Papua New Guinea Supreme Court has ruled against restoring services such as electricity, medical services, and running water to the Manus Island detention center, which was formally closed by the Australian government last Tuesday. The court ruled that the responsibility for the asylum seekers detained at Manus Island now "falls squarely on the government of PNG," but that there was no reason the 600 individuals refusing to leave the center should remain there. Rights activists and asylum seekers have resisted the move, citing fears for their safety and uncertainty about the readiness of new facilities.

Zimbabwe President Robert Mugabe has dismissed his longtime vice president, Emmerson Mnangagwa, for "disloyalty, disrespect, deceitfulness, and unreliability" in a move many are speculating is intended to pave the way for Mugabe’s wife, Grace, to take over and eventually succeed him to the presidency. The dismissal occurred a day after Grace Mugabe accused Mnangagwa of conspiring against the 93-year-old president. Rashweat Mukundu, an analyst with the Zimbabwe Democracy Institute, predicted a standoff between Mnangagwa’s supporters and the Mugabe government as a result of the firing, arguing that "Zimbabwe’s future is more uncertain with security at higher risk than before."