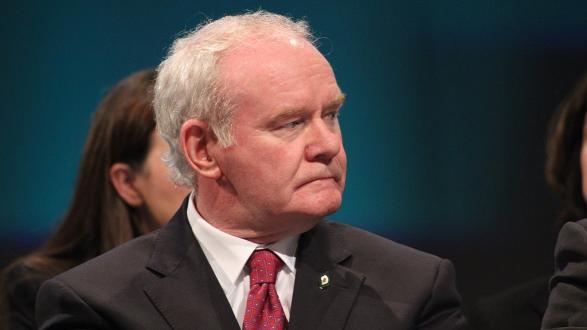 This week, Northern Ireland’s deputy first minister’s resignation will force the government’s dissolution; diplomats from the United Arab Emirates are killed in Afghanistan blast; Gambia’s outgoing president refuses to step down despite losing the election; and more.
____________________

On Sunday, Mexican officials arrested an Indian-American man for stalking and shooting an American diplomat in Guadalajara. The shooting was recorded by nearby security cameras. The suspect, a 31-year-old naturalized American from India named Zafar Zia, will be deported to the United States. The Jalisco state prosecutor’s office said the motive may be related to a dispute over a visa. The diplomat, consular officer Christopher Ashcraft, is in stable condition.

Taiwan’s defense ministry said in a statement Wednesday that China’s only aircraft carrier and other ships entered the Taiwan Strait. Taiwan urged its citizens to remain calm as it scrambled F-16 fighter jets and navy ships to monitor the Chinese fleet. China’s aircraft carrier was returning from military exercises in the South China Sea. In a statement, China said it was "committed to promoting peace and stability in Asia."

Northern Ireland’s Deputy First Minister Martin McGuinness resigned in protest against First Minister Arlene Foster and her Democratic Unionist Party’s conduct over the Renewable Heat Incentive scandal. His party, Sinn Féin, will not be replacing him. The 1998 Good Friday Agreement – which ended the conflict in Northern Ireland – requires power-sharing executives from both nationalist and unionist representatives, so his resignation will force the government’s dissolution and create a power vacuum as the UK prepares to leave the European Union. The move will likely lead to a Northern Ireland assembly election.

Eleven people were killed in an explosion at the Kandahar governor’s guesthouse in Afghanistan during a reception for visiting Arab officials. The deputy governor of Kandahar, an Afghan senator, an Afghan member of parliament, five diplomats from the United Arab Emirates, and an Afghan envoy to the United States were among those killed. Eighteen people, including the gorvernor of Kandahar and the UAE ambassador to Afghanistan, were injured. No group has claimed responsibility for the attack.

Myanmar’s Deputy Minister of Foreign Affairs Kyaw Tin visited Dhaka, Bangladesh, this week to begin top-level talks on the Rohingya crisis. On Monday, the United Nations said 65,000 Rohingya refugees fled Myanmar for Bangladesh in the past three months as the military carries out a brutal counterinsurgency campaign. Refugees are reporting that Myanmar soldiers are systematically raping girls and women, setting houses on fire with rocket launchers, and shooting villagers at random.

Gambian President Yahya Jammeh said he will not step down before the country’s Supreme Court issues a decision on the close December 1 presidential election. Jammeh lost that election to Adama Barrow, who says he will be inaugurated on January 19. Jammeh initially accepted defeat but later called for a new election, citing irregularities in the first one. The United Nations, the European Union, and the Economic Community of West African States have called on Jammeh, who has ruled for 22 years, to step down before the uncertainty turns to violence.