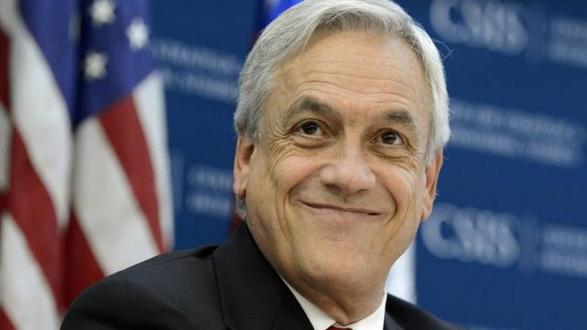 This week, Sebastián Piñera wins Chile’s presidential election in what marks the most recent shift to the right in Latin America; the United States accuses North Korea of being behind the WannaCry cyberattack; Saudi Arabia intercepts another Houthi missile; and more.

Former President Sebastián Piñera won Chile’s presidential election on Sunday in what marks the most recent shift to the right in Latin America, a region once dominated by leftist governments. Piñera, who won by a 9-point margin after polls predicted it would be a close race, is a 68-year-old billionaire from Chile’s "Let’s Go Chile" coalition who governed the country from 2010 to 2014. During his campaign he promised to roll back reforms instituted by current President Michelle Bachelet, whose popularity has plummeted following a second-term corruption scandal. Piñera is ranked one of the world’s wealthiest politicians and has faced media criticism due to his use of tax havens and offshore holdings. Although some observers have suggested that Piñera’s victory signals the recession of Latin America’s "pink tide" of left-wing governments, his center-left opponent, Alexander Guillier, received 45.4 percent of the vote, and earlier voting rounds in November indicated that strong support for center and leftist parties still exists.

Myanmar authorities have found a mass grave containing 10 bodies outside of a village in the Rakhine State in western Myanmar, prompting allegations of genocide from the UN’s top human rights official. The village is located in the Maungdaw township, one of the areas most affected by the recent violence that accompanied Myanmar security forces’ expulsion of the Rohingya following an August 25 militant attack. On Tuesday, officials from Myanmar and Bangladesh met in Dhaka to form a joint working group tasked with overseeing the repatriation, resettlement, and reintegration of the Rohingya Muslims who fled Myanmar into Bangladesh. Under the agreement, repatriation of the Rohingya currently sheltered in Bangladesh is expected to begin January 23. The joint working group has agreed to submit information on the repatriation process and its progress to its respective governments and the news media. Tune in to our January 25 Situation Briefing teleconference to learn more about this evolving situation.

During a White House briefing on Tuesday, the Trump administration formally accused North Korea of responsibility for the WannaCry ransomware attack in May that locked over 300,000 computers worldwide. Homeland Security advisor Tom Bossert said that the attack demonstrated that North Korea "want[s] to hold the entire world at risk, whether it be through its nuclear program or cyberattacks," and emphasized the importance of holding the country publicly accountable. In a Wall Street Journal op-ed published Monday, Bossert wrote that the United States would, if unaided, "act alone to impose costs and consequences for cyber malfeasance." Tuesday’s announcement arrived almost three years after President Obama accused North Korea of being behind the 2014 Sony Pictures Entertainment hack, and a day after President Trump announced his new national security strategy, which highlights the threat of cyberattacks.

Russia characterized the new national security strategy announced by President Trump on Monday as "imperial" and indicative of a "brazen lack of desire to give up a unipolar world." The reaction from China was also negative, with the Chinese Foreign Ministry saying the newly unveiled strategy is reflective of a "Cold War mentality." The document accused Russia of "using subversive measures" to undermine NATO and characterized it as a "revisionist" power which, together with China, aims to "shape a world antithetical to U.S. values and interests." In a speech following the release of the 68-page document, President Trump emphasized the U.S. desire for cooperation with the two countries in a way that "protects our national interest."

A Saudi-led coalition has intercepted a Houthi missile headed for Riyadh, marking the third time since November that a missile has been launched from Yemen toward Saudi Arabia. Houthi rebels took responsibility for the missile, which they said was meant to commemorate the 1,000 days since a Saudi-led coalition began its bombing campaign in Yemen. The Volcano 2-H ballistic missile targeted the al-Yamma royal palace in Saudi Arabia, hours before King Salman was due to announce the kingdom’s 2018 budget in a palace ceremony. Saudi Arabia and its allies have been at war with Yemen since March 2015, and Saudi-led airstrikes have intensified following the December 4 killing of former Yemeni President Ali Abdullah Saleh. At least 8,750 people have been killed in the conflict so far.

New Zealand’s high court has rejected a proposed merger between the country’s two largest print media companies, citing concerns that the merger would endanger media plurality and threaten New Zealand’s democracy. The merger of the two companies, NZME and Fairfax Media, would have resulted in the creation of an entity with control over more than 90 percent of the print media market. The decision was a response to the media giants’ appeal to overturn a May Commerce Commission ruling that rejected the merger. In a media release, Justice Robert Dobson wrote that the merger posed a meaningful risk to media plurality and would have had "major ramifications for the quality of New Zealand democracy."

Peace talks between rival South Sudanese factions are underway in Addis Ababa, Ethiopia, this week. The talks were convened by the Intergovernmental Authority on Development and aim to restart negotiations after a 2015 peace deal fell apart following violent clashes between supporters of President Salva Kiir and those of rebel leader Riek Machar in South Sudan’s capital. Key to revitalization of the 2015 peace deal is an agreement to cease hostilities, but accusations of an overnight government attack on a rebel base have already cast a pall on the meeting.