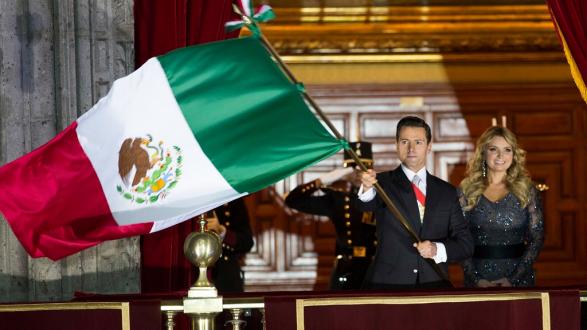 In this interview, Dr. Pamela K. Starr discusses the future of U.S.-Mexico relations, why Mexico should be proactive about renegotiating NAFTA, and the prospects for comprehensive immigration reform under the Trump administration. Starr is the director of the U.S.-Mexico Network, a university fellow at the USC Center on Public Diplomacy, and an associate professor of teaching in the School of International Relations and in Public Diplomacy at the University of Southern California. Read more about her background.
____________________

Dr. Pamela K. Starr: The administration's priorities should be China, Russia, and the Middle East. Those are in general always the top priorities in U.S. foreign policy. The Trump administration has chosen to make the Iran nuclear deal something that they now have to deal with in the first 100 days, and they’ve decided to put Mexico on that agenda as well. Neither is a crisis in need of immediate address, but they are now on the President-elect’s desk.

The relationship between Mexico and the United States is actually quite good. It’s one of the better bilateral relationships the United States has in terms of collaboration, congruent interests, and a significant degree of institutionalization and interaction. That said, Trump has decided to deal with certain issues – like immigration and trade – in a rather blunt way.

PC: What will it mean for U.S.-Mexico relations if President-elect Trump lives up to some of his campaign promises, including imposing tariffs on Mexico, building a border wall and insisting that Mexico pays for it, renegotiating NAFTA, or deporting millions of undocumented immigrants?

Starr: There are two ways to see the U.S.-Mexico relationship going forward. The first is based on a literal interpretation of what President-elect Trump said when he was a candidate for president. I don’t think that this is the more likely scenario, for a few reasons.

In his interview on 60 Minutes, Trump made it plain that the immigrants that he wants to deport as quickly as possible are those who "have criminal records -- gang members, drug dealers," which he overestimated to be 2 to 3 million. That’s still a large number. While he certainly is going to beef up deportation efforts, as House Speaker Paul Ryan put it, "We are not planning on erecting a deportation force." That doesn’t mean that Mexicans living in the United States without documentation and other undocumented immigrants aren’t going to be concerned, but I don't think there's going to be a deportation force.

It’s not worth damaging a very important bilateral relationship over something as silly as insisting that Mexico pay for a border wall. Trump will realize that once he becomes president.

During that same 60 Minutes interview, Trump said that he would build a border wall but that certain parts of it "could be fencing." It’s also abundantly clear that Mexico is not going to pay for it. It’s not worth damaging a very important bilateral relationship over something as silly as insisting that Mexico pay for a border wall. Trump will realize that once he becomes president.

Regarding his campaign pledge that he’s going to tax companies that outsource jobs to Mexico, constitutionally he can’t follow through on that. The constitution prohibits the president from taxing individual companies. He would have to tax an entire sector, not an individual company. He can in fact impose tariffs unilaterally, but it would take him declaring a state of national emergency. I don’t think he is going to declare a national emergency so he can put a 35 percent tariff on General Motors.

I think that the right way to conceive of U.S.-Mexico relations going forward is to distinguish between the candidate Trump and President-elect Trump, who may still have the characteristics of a populist firebrand but also has a responsibility to govern. Under this view Mexico should look at Trump’s desire to deal with immigration and NAFTA as an opportunity.

Like Nixon going to China, it may take a president like Donald Trump – with a Republican Congress – to actually pass comprehensive immigration reform.

Mexico has long wanted comprehensive immigration reform. Like Nixon going to China, it may take a president like Donald Trump – with a Republican Congress – to actually pass comprehensive immigration reform. That reform won’t have a path to citizenship, but it may have what Mexico most wants and needs for its citizens living in the United States: a guarantee that they can live safely and won’t have to worry about deportation or discrimination. Those are the bottom lines for Mexico and for Mexicans living in the United States without documentation. A path to citizenship is nowhere near the top of what they want or need.

NAFTA is a 25-year-old treaty, and it shows its age. It was negotiated before there was e-commerce or digital anything. It was negotiated before China entered the World Trade Organization. It was allowed to get out of date in the first place because it was so politically unpopular in the United States that you couldn’t even mention the word "NAFTA." Donald Trump has made modernizing the treaty possible.

PC: What has been the public’s reaction in Mexico to Donald Trump’s election? How will that response shape U.S.-Mexico relations going forward?

Starr: Mexicans have been stunned. They’re horrified, and they’re feeling very defensive. They’re feeling vulnerable in the face of a very powerful United States that is promising to rub Mexico’s nose in the mud. On social media and in news commentary you see a defensive – "rally the troops and circle the wagons" – kind of response. Thankfully the Mexican government has been much more measured in its response to Trump's election. But to the extent that the public is feeling defensive and anti-Trump, it’s going to be hard for a president with such low poll numbers to lead his country to a more positive viewpoint.

The Mexican government needs to get its head around the idea that they shouldn’t be thinking about defending NAFTA, they should be thinking about getting out ahead of this negotiation process and coming to the table with a list of demands of what it wants in a renegotiation. Mexican President Peña Nieto is going to have to reach out into civil society for people to join in the process of renegotiating the treaty. He shouldn’t just do it from within the government. He needs to reach out to the former negotiators, those who worked the original master treaty, as well as universities, think tanks, and civil society groups.

This is an opportunity for Mexico to say to the United States, "Bring it. We’re ready. We know exactly what we want in terms of the updating of this treaty."