First 100 Days: Do Not Void the Iran Nuclear Deal 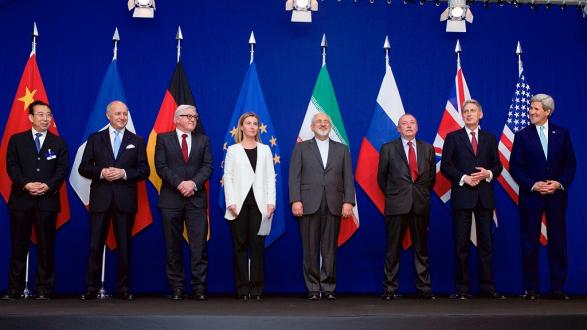 In this interview, Colonel (r.) Steve Miska discusses the future of U.S. engagement in the Middle East, the next stage in the fight against ISIL, and what will happen if the Trump administration voids the Iran nuclear deal. Miska is a national security consultant with more than 25 years of experience as an active duty military officer, having served as Director for Iraq on the National Security Council at the White House, Infantry Task Force Commander during war-time in Iraq, and an economics instructor at West Point. Read more about his background.
____________________

Colonel (r.) Steve Miska: Nonproliferation continues to be a major foreign policy challenge that does not really change from one administration to the next. Another top priority is reassuring our allies and partners, particularly where there are treaties in place. Those are very important priorities that we need to focus on.

We also need to reassess ongoing conflicts. With a new administration and new leadership coming in at multiple levels, they need to understand the state of play with respect to any area where we have troops committed. They need to make sure they understand the dynamics and get a solid assessment of the strategies in place, so that they can then determine whether or not the strategies need to be reconsidered.

Lastly, on the counterterrorism front, we have what I suspect is a decades-long challenge with respect to terrorism and the fallout from organizations like ISIL, al Qaeda, and others that attempt to export their terror for psychological benefit. That reality requires a strong interagency approach from the United States, along with an international approach with our partners and even some unfriendly countries who are trying to prevent terrorist attacks.

PC: What does a Trump administration mean for future U.S. engagement in Middle East conflicts?

Miska: That largely depends on who President-elect Trump brings into the administration and what priorities they establish. There tend not to be huge shifts with regards to our national interests from one administration to the next, regardless of whether or not it’s a change in party. We’re focused on security, on prosperity across the globe, and on our national values. Those enduring interests stay pretty consistent in the National Security Strategy, the primary document that sets them out from administration to administration.

It’s very difficult to untangle yourself from the Gordian knot that we call the Middle East.

When you look back at our key partners in the region – Israel, Saudi Arabia, Turkey, Jordan, Egypt – the priorities are going to hinge largely around those partners and the coalitions that we’ve brought together to focus on some very intractable issues. So regardless of the rhetoric in campaigns that lead up to elections, I’ve seen a pretty amazing consistency from one administration to the next. It’s very difficult to untangle yourself from the Gordian knot that we call the Middle East.

PC: How will it impact the United States and U.S. forces in the Middle East if President-elect Trump follows through with some of his campaign rhetoric about torture and the treatment of terrorists’ families?

Miska: That’ll be difficult to do, only because the Bush administration received a tremendous amount of public pressure regarding torture. Those types of means of coercion and persuasion are just hard to get away with in the era where almost anybody with a cell phone can be a journalist in the field. No matter how much you strive for secrecy, a lot of that stuff is going to come out and play in the public dialogue.

The regulations that govern how our forces operate are rooted in ethics.

I find it hard to believe that there will be a major shift where all of a sudden our intelligence operatives are leaning towards torture, for example, given our international agreements. That doesn’t even begin to approach the military perspective. The regulations that govern how our forces operate are rooted in ethics. Transparency is going to come back and bite the administration pretty quickly if there are orders that are perceived as unethical, because you’ll start seeing military leaders resign and it will detract from the meaningful work that needs to take place.

PC: What does the next stage of the U.S. fight against ISIL look like?

Miska: ISIL will continue to lose ground. There’s a tremendous amount of pressure on them now. From the military perspective, that tends to be the easiest part of the strategic landscape. The problem is governance after the fact.

That’s not meant to downplay how complex and difficult the military component is, of course. I served on the ground in Iraq in combat for 40 months, so I don’t want to detract from my brothers in arms who are out there on the frontlines attempting to coordinate, train, equip, and inspire Iraqi forces and other allies in the fight. It is amazingly complex and difficult.

[The military perspective] tends to be the easiest part of the strategic landscape. The problem is governance after the fact.

That said, it’s even harder on our diplomats attempting to nudge Iraqi politicians to come to the table with Kurdish authorities and to broker agreements that prevent the Turks from sticking their hands too far in the pie, while other players, like the Iranians and some of our other Gulf Arab neighbors, all have vested interests in the outcome of what happens in Syria and Iraq with respect to ISIL. Trying to broker an agreement that allows for some level of governance to be achieved and establishes a baseline of security in the region is going to be amazingly complex. On the Iraq side, it’s got to have buy-in from Baghdad and Erbil, but Tehran and Ankara are going to attempt to be in the conversation. It will be a challenge for our diplomats to really move that forward.

The other really challenging issue is the humanitarian fallout. In Mosul you’ve got a city that used to have almost 2 million people in it – it’s unknown how many are left. Many are being held hostage by ISIL, used as human shields in many cases to complicate coalition efforts. We’ve seen hundreds of thousands of refugees on the move, and internally displaced persons as well within Iraq. There’s huge pressure on Turkey, Jordan, and the Kurdish region in terms of where these refugees have already gone, and of course those that have gone on to Europe have created a lot of consternation. Putting those pieces back together after they’ve been shattered is a huge challenge for our diplomats.

PC: What will it mean for U.S.-Iran relations -- and relations with key U.S. allies -- if the Trump administration voids the Iran nuclear deal?

Miska: The biggest risk in the region is a nuclear arms race. If the Iranians feel betrayed that a subsequent administration did not follow through on an agreement, and they go back into the mode of attempting to develop a nuclear capability, that could build enough uncertainty in Saudi Arabia to make them pursue their own nuclear capability. When you’ve got Saudi Arabia, Iran, and Turkey all armed with nuclear weapons, then we’re recreating a situation like what we’ve got with India and Pakistan. It’s not like during the Cold War where there were protocols between the United States and the Soviet Union to potentially avert worldwide disaster. If we’ve got nuclear proliferation running rampant in a region as unstable as the Middle East, and potentially North Africa, it doesn’t bode well for stability in the world.

We’ve bought another decade of time with the Iran nuclear deal. It’s allowing for another way forward that’s at the negotiating table – using economic incentives – as opposed to having to always resort to the threat of military action. Voiding that agreement is not a smart move in any situation that I can see.

If we’ve got nuclear proliferation running rampant in a region as unstable as the Middle East, and potentially North Africa, it doesn’t bode well for stability in the world.

One last thing I’d like to mention is something that might not make the priority list, but is a strategic necessity that the United States must pursue with respect to its indigenous partners abroad. Regardless of where we’re operating, whether it’s Iraq, Syria, Nigeria, Yemen, or wherever, we have local partners who we need, not just for military operations but for diplomacy as well. They’re our cultural eyes, ears, and mouthpieces. Proactively insulating our soft networks is a strategic imperative for future operations. It’s something that if we don’t get right we’re going to undermine not only the last decade’s worth of sacrifice, but also future conflicts, because nobody’s going to want to work with us if we just leave them on the field of battle after we bring our troops home and they get taken out by our enemies.

Part of the reason ISIL was able to manifest itself in northern Iraq was because there was no buy-in from many of the Sunni leaders who essentially helped us defeat al Qaeda in Iraq back in 2007 and 2008. They were on their heels, they were done, and then we withdrew from Iraq in 2011. But the Iraqi government was so resistant to give these Sunni leaders – who were instrumental in that success – any voice or part in the government in Baghdad. As a result of that disenfranchisement they were either killed or co-opted as al Qaeda, and then eventually ISIL made their return. This is going to continue to play out around the globe if we don’t do a better job of insulating those soft networks. That’s something that we’ve got to pursue beyond just a Special Immigrant Visa, which is a policy of last resort in many cases where we just bring people to the United States. That’s problematic for a lot of reasons. We’ve got to do a better job of insulating these people and keeping them in the fight abroad.
____________________