First 100 Days: Do No Harm in Latin America 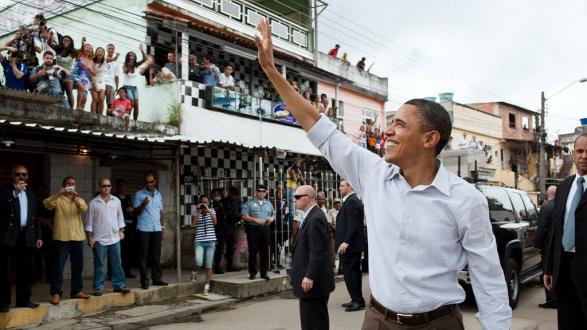 In this interview, Dr. Abraham Lowenthal says the Trump administration should not disturb America’s relationships with Latin American countries. Dr. Lowenthal, a widely-published scholar, is the founding president emeritus of the Pacific Council. He is professor emeritus of International Relations at the University of Southern California, and  was the founding director of the Woodrow Wilson Center’s Latin American Program and the Inter-American Dialogue. Read more about his background.
____________________

Dr. Abraham Lowenthal: The number one priority in Latin America should be to do no harm: that is not to cause any more new problems, crises, and difficulties in American foreign policy than the many which already exist. In contrast to many regions of the world — the Middle East, South and East Asia, Europe, and parts of Africa — Latin America is a region where the United States faces few significant difficulties in its foreign policy. It has productive and cooperative relations with most of the countries of the region. There are some exceptions to that, but those exceptions are countries where the degree of friction with the United States has been decreasing, and where U.S. aims are gaining ground. A high priority of the Trump administration should be to not reverse that positive situation in the Western Hemisphere.

It would be naïve to think that these are just banana republics that can’t defend themselves.

Judging from Trump’s campaign statements, the incoming administration may be inclined to take different approaches to its Latin America trade policy and to immigration. But if they go about it the way they talked about during the election, it would stir up tremendous hostility throughout the entire region. The United States has friends governing throughout Latin America. It would be naïve to think that these are just banana republics that can’t defend themselves. These countries have a lot more force and influence than they did decades ago. They have important international relationships around the world and qualified people running their economies and foreign policies. The Trump administration runs the risk of mobilizing all of that energy against the United States, and that would be tragic.

PC: What is the future of U.S.-Cuban relations in the next four years?

Lowenthal: Cuba is already on a course that will lead to a normalization of relations with the United States. That genie is out of the bottle and it would be difficult to stuff it back in. Normalization is also an important objective of American foreign policy. From his statements, I think Trump misunderstands the nature of the agreement between Cuba and the United States.

The United States should not try to decide how Cuba should rule itself or vice versa.

The commitment is to put the two countries on the course of increased contact, interchange, mutual respect for each other’s sovereignty, and cooperation on shared concerns.  The United States should not try to decide how Cuba should rule itself or vice versa. The idea that the United States can decide the terms and try to use sanctions, pressure, and denial to push Cuba towards a particular kind of political and economic system was tried for 50 years with no success. There’s absolutely no reason to believe that going back to that policy would be successful.

In the last two years, there’s been an increasing American presence in Havana in business and educational terms, increasing cooperation between the governments on a series of practical matters, including immigration and narcotics, and responding to humanitarian crises in the Caribbean Basin region. To put an end to all that, and to try to bully Cuba, would be reverting to an unsuccessful strategy.

PC: What role should the United States play in the economic and political crises in Venezuela and Brazil?

Lowenthal: First of all, these are very different situations. I wouldn’t refer to the Brazil case as an economic or political “crisis.” Certainly, the Brazilian economy has had some downturns, partially as a result of the great decline of the commodities boom. It’s still a pretty important economy.

Brazil is however going through a major political challenge. The former president was impeached and the president before her is likely to stand trial. Close to a majority of the members of Congress are either under indictment or investigation, mainly for corruption of various kinds. The striking thing is that the institutions of Brazilian governance have been handling these problems. They have had very significant problems to deal with and they have dealt with them through their rules, institutions, and an independent judiciary which is aggressive about investigating authorities. A free press shines some light on these different issues. In some ways, what Brazil is doing is demonstrating the resilience and strength of its political institutions.

What Brazil is doing is demonstrating the resilience and strength of its political institutions.

Venezuela is another matter. Hugo Chávez, a charismatic, populist leader with little understanding or interest in the basic rules of economics, took over at a time when oil prices were low, developed his approach to empower and include a third of the country’s population who had been completely left out of the system, and got considerable popular backing from that, especially as the price of oil rose and there was plenty of money to spend.

Now we have a situation where Chávez has died, his chosen successor is not charismatic, the price of oil has plummeted, and therefore a discredited and disliked government in an economic crisis and most of the country wants them out. The opposition has been thwarted because the government has made the legislature much less relevant by packing the Supreme Court, and opposition initiatives are ruled unconstitutional. There’s a political impasse and no clear way out of it.

What the United States has been doing behind the scenes is working with other countries, particularly in Latin America and recently the Vatican, to create space for dialogue and discussion between Venezuelans within the Maduro regime and Venezuelans in the opposition. The United States has the capacity to encourage that process and reward any progress. That’s a much safer and more constructive path than deciding that Venezuela does not have the government it deserves and moving to overthrow it, or undertaking sanctions that will cause more poverty. I very much hope that the Trump administration will study what’s going on and will consult with career professionals who have designed the policies.

PC: Colombia was rarely mentioned in the campaign. How do you expect the incoming administration to treat the ongoing peace process?

Lowenthal: Former President Uribe, for whom current President Juan Manuel Santos served as Defense Minister, has led the opposition against the peace agreement. With what has happened in American politics, it’s possible that Uribe, who certainly has friends and supporters in Washington and particularly among conservative Republicans, will try to mobilize the U.S. government and some other international friends to stop this agreement from going through. Just about everyone I know who follows this closely thinks that this has more to do with former President Uribe’s ego than with anything else. He tried to bring peace to Colombia and failed, and it may irk him that his protégé pulled it off.

Colombia is one of the most important friends, supporters, and allies of the United States.

This is a good agreement in terms of the future of Colombia. Colombia is one of the most important friends, supporters, and allies of the United States. Santos deserves the Nobel Peace Prize he was awarded for taking risks and focusing hard on getting this agreement done. I am hoping that the incoming Trump administration, even if it’s lobbied by Uribe and others, will stick with the established U.S. policy of supporting the Colombian government in trying to resolve this problem.