Executive Order on Refugees Does More Harm Than Good 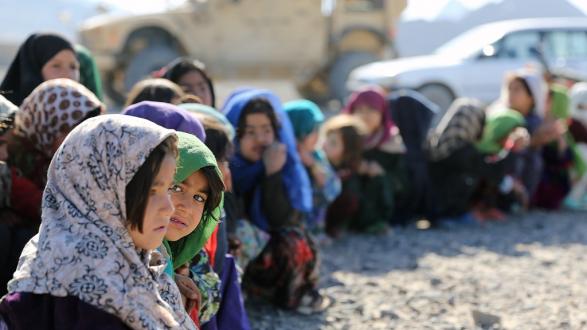 Ferris is an Institute for the Study of International Migration Research Professor at Georgetown and a non-resident senior fellow in Foreign Policy at the Brookings Institution. Miska is a national security consultant for the Global Peace Foundation and recently retired from the military after 25 years of service. The discussion was moderated by Ehsan Zaffar, a senior advisor at the Department of Homeland Security.

"Vetting isn’t easy," said Ferris. "You have to be really careful about who comes into the country, but we’re being awfully careful now. The vetting procedures are quite extensive and take a long time."

On January 27, President Trump signed an executive order titled "Protecting the nation from foreign terrorist entry into the United States." The order suspended the U.S. Refugee Admissions Program for 120 days. Resettlement for Syrian refugees has been postponed indefinitely and the total number of refugees admitted into the United States will be capped during the 2017 fiscal year at 50,000. Once reinstated, the resettlement of Christian refugees will be given priority.

"The signal we sent to the Iraqi security forces is that the United States does not even trust its closest partners. That frays the relationships between U.S. and Iraqi forces."

"I think about the immigration system as an ecosystem, almost like a coral reef," said Miska. "It evolves and it’s sensitive to changes in conditions. This executive order was akin to somebody coming along and dropping an anchor onto this very sensitive coral reef. As a result, the relationships with our closest local indigenous partners are damaged."

Miska said that interpreters and other local national partners are critical for mission success in combat zones, adding that this executive order makes it seem like the United States is abandoning them.

"They take a huge risk by working with us, and if they do not think they have a lifeline from us, that gives our adversaries a greater chance of coercing and undermining their ability to support our efforts," he said. "The signal we sent to the Iraqi security forces is that the United States does not even trust its closest partners. That frays the relationships between U.S. and Iraqi forces."

Ferris said one of her main concerns is how countries like Lebanon or Turkey will interpret this action, considering they are hosting millions of refugees themselves.

"When they hear the United States, with all of its resources and proud traditions as a country of immigrants, say, ‘We can’t take anymore, there are too many serious security concerns that we can’t deal with,’ I’m concerned what this will do to an already overtaxed and fragile international system," she said.

"One of the things that make me proud to be an American is that we have been a haven for the world and embraced multicultural diversity."

Ferris is also concerned about what this order will mean for U.S. identity.

"One of the things that make me proud to be an American is that we have been a haven for the world and embraced multicultural diversity," she said. "Regardless of your accent or where you come from or your religion, you can be as American as apple pie, but that’s something that we’re in danger of losing. It’s being eroded by these particular executive actions."

Both Miska and Ferris agreed that the vetting process in place is already appropriately extensive.

"I’m not sure that some of the people making these policies are familiar with the procedures that are actually already in place in terms of vetting for security and multiple checks and multiple security agencies that look at the files," said Ferris. "If someone wants to enter the United States and do harm, they’re not going to pick the refugee resettlement route because it does take such a long time and it’s so intrusive in terms of the process. The policymakers really need to understand the present system, and if there are areas that can improve, then by all means make those improvements."

"If someone wants to enter the United States and do harm, they’re not going to pick the refugee resettlement route because it does take such a long time and it’s so intrusive in terms of the process."

Miska agreed, adding that the system in place is already what he would call "extreme vetting." He also pointed out that the refugee resettlement program has not been the source of terrorist attacks in the United States.

"There already is a fairly tight level of vetting that occurs," he said. "The attacks since 9/11 have predominantly been from homegrown terrorists, mainly U.S. citizens. They didn’t infiltrate the United States through refugee channels. I’m skeptical that much can be achieved by Trump’s executive order halting the refugee program. I suspect that what will be determined is that the system is already actually pretty secure in terms of the level of vetting that goes on."