On Eve of Mar-A-Lago Summit, Whither U.S.-China Relations? 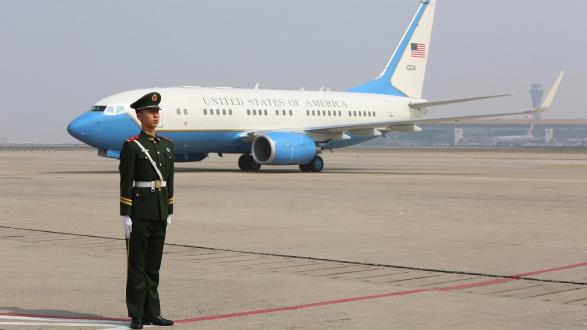 National focus on Russian hacking and possible ties to the Trump campaign, healthcare reform, wiretapping, and other news has kept U.S.-China relations on the back burner. This has left us with nothing to do but speculate about where things might be heading as we watch and wait. Chinese leaders have been cautious as they do the same. Things began to ramp up a bit with the recent visit by U.S. Secretary of State Rex Tillerson to Beijing, and now we are beginning to see some focus on China in the run-up to the Mar-A-Lago summit.

As I write this a few days before the summit, it is hard to envision anything other than a downturn coming in U.S.-China relations, as well as a major opportunity for Beijing to fill the gaps on the world stage that Washington appears to be leaving as we focus on "America First," withdraw from global climate change agreements, and more.

On the trade side, China has been aggressively promoting something called the "Regional Comprehensive Economic Partnership" (RCEP), the Chinese-led alternative to the Trans-Pacific Partnership (TPP). TPP, of course, did not include China. RCEP includes the 10 ASEAN countries, Japan, Australia and New Zealand, as well as India, South Korea, and of course China. RCEP will be a regional free trade agreement with lower standards on issues like intellectual property protection, environmental standards and labor standards, but it will lower tariffs on trade among member countries, which will help U.S. competitors and hurt us. There is even some talk (by our staunch ally Australia) of inviting China into the TPP in our place, which would be the ultimate irony.

If the tweets and executive orders are a guide to what we can expect, this week’s summit could be a very contentious meeting indeed.

In terms of U.S. policy on trade, I expect the administration to eventually fulfill some of Mr. Trump's campaign promises – much more aggressive use of trade remedies (anti-dumping and countervailing duties) and possibly declaring China a currency manipulator. And it goes without saying that if the United States does that, China will retaliate.

We now have a new institution, the National Trade Council, headed by Peter Navarro, a man who wrote a book  in 2006 called The Coming China Wars, and followed that up with a movie in 2012 called "Death by China," so it is not hard to guess where he stands. But in fact there is a lot of support for a tougher approach toward China. The U.S. business community, which traditionally has lobbied hard for better relations with China––going all the way back to PNTR (permanent normal trade relations) in the 1990s and China's WTO accession in 2000 and 2001––wants a tougher approach. The buzzword now is "reciprocity."

Former Ambassador to China Max Baucus was quoted not long ago in the Washington Post saying that the United States was not firm enough when combating Chinese protectionism. "China has a long-term strategy to build up its own champion industries, for its own benefit and to the detriment of other countries,” he said. “The United States should stand up a lot more with respect to China’s economic wall, let alone the Internet wall.”

One of the reasons that the business community has soured a bit is that there has been a long-held view––now seeming more like an unfulfilled hope––that trade and engagement will set China free, so to speak. When China acceded to the WTO in 2001, former Treasury Secretary Robert Rubin told Congress the move would "sow the seeds of freedom for China's 1.2 billion citizens." In 2005 then Deputy Secretary of State Robert Zoellick said we need to make China a "responsible stakeholder" by giving it a vested interest in maintaining a fully functioning trading system – as he said at the time, a responsible major global player shouldn’t tolerate rampant theft of intellectual property and counterfeiting.

And more generally, conventional wisdom was that the increased exposure to the outside world – the vast number of Chinese students studying in the United States (millions over the years and over 350,000 here right now) and westerners studying in China, the travel back and forth, and other exchange would inexorably lead to a more open, democratic China.

However, trade and engagement do not seem to have had the desired effect, and companies are frustrated at what they feel is a playing field that is increasingly tilted against them. Hence the growing support for tougher measures and more reciprocity.

On the foreign policy side, President Trump has called for a big increase in military spending and a generally more muscular approach to foreign affairs. In March Steve Bannon said in an interview to Breitbart: "We're going to war in the South China Sea in 5-10 years. There's no doubt about that." North Korea, of course, is an extremely dangerous flash point, and we saw Mr. Tillerson's recent comments on that subject to the effect that the policies of the last 20 years have not worked, and that "nothing is off the table," followed by the President telling the Financial Times that "If China is not going to solve North Korea, we will."

Although China is not happy with North Korea's actions, Beijing is more suspicious of us, and our Japanese and South Korea allies, than it is of North Korea. China seems to be much more exercised at South Korea for agreeing to host a U.S. missile defense system (THAAD) than it is at North Korea and its missile launches. To be clear, I am not predicting a war between the United States and China, but I do think tensions will ratchet up.

It is hard to envision anything other than a downturn coming in U.S.-China relations, as well as a major opportunity for Beijing to fill the gaps on the world stage that Washington appears to be leaving.

On a more positive note, so far Chinese leaders have been acting like the adult in the room, advocating for a free and open trading system, announcing steps to combat climate change, and more. In March, Premier Li Keqiang gave a speech positioning China as a leading proponent of globalization, and talked about how China is open to foreign investment and a leader in promoting free trade. At Davos in January, President Xi said similar things, presenting China as a force for global stability. Xi also admonished the United States on climate change, saying of the Paris Agreement, "All signatories should stick to it instead of walking away from it, as this is a responsibility we must assume for future generations."

In the fall of 2017, China will hold an important meeting, the 19th Party Congress, which will be the key opportunity for Xi to get his team in place for the next five years, and he has a strong interest in demonstrating that the Chinese economy is growing stably and that a rising China is playing a more important role on the global scene. A sharp downturn in the U.S.-China relationship could be a risk for Xi.

Last Thursday President Trump tweeted the following: "The meeting next week with China will be a very difficult one in that we can no longer have massive trade deficits and job losses. American companies must be prepared to look at other alternatives." This was followed on Friday by the President signing two executive orders aimed at combating foreign trade abuses. According to multiple sources, the executive orders will initiate a large-scale review of the causes of the trade deficits with some of our largest trading partners (China, of course, is far and away the source of our largest trade deficit, at almost $350 billion last year), and order stricter enforcement of U.S. anti-dumping laws, among other things.

If the tweets and executive orders are a guide to what we can expect, this week’s summit could be a very contentious meeting indeed.

Fareed Zakaria wrote recently, referring more to geopolitics than trade, "after 75 years of U.S. leadership on the world stage, the Mar-A-Lago summit might mark the beginning of a handover of power from the United States to China." Sobering words.
____________________

Ira Kasoff is a Senior Counselor at APCO Worldwide, a Pacific Council member, and the former Deputy Assistant Secretary of Commerce for Asia. He was part of the first group of scholars sent to China following the re-establishment of diplomatic relations in 1979.